Let us finally rip off the veneer that Trump’s affinity for white supremacy is distinct from the Republican agenda. It isn’t. 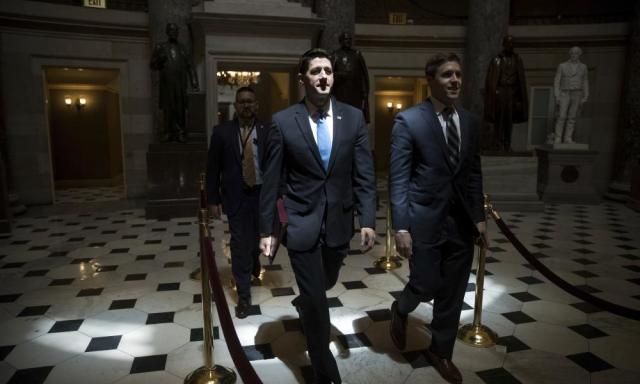 ‘If Republican lawmakers want to distinguish themselves from Trump’s comments, they need to do more than type out 144 characters on their phone.’ Photograph: Andrew Harnik/AP

It takes approximately 30 seconds to send a tweet. A half hour to draft and release a statement. And the shelf life of both is only marginally longer. We should not commend Republican party elected officials who claim outrage on social media at Trump’s remarks, often without daring to mention his name. The phony claimed outrage becomes dangerous if it convinces anyone that there is a distinction between Trump’s abhorrent comments and the Republican Party agenda.

The lesson from Charlottesville is not how dangerous the neo-Nazis are. It is the unmasking of the Republican party leadership. In the wake of last weekend’s horror and tragedy, let us finally, finally rip off the veneer that Trump’s affinity for white supremacy is distinct from the Republican agenda of voter suppression, renewed mass incarceration and the expulsion of immigrants.

There is a direct link between Trump’s comments this week and those policies, so where is the outrage about the latter? Where are the Republican leaders denouncing voter suppression as racist, un-American and dangerous? Where are the Republican leaders who are willing to call out the wink (and the direct endorsement) from President Trump to the white supremacists and acknowledge their own party’s record and stance on issues important to people of color as the real problem for our country?

Words mean nothing if the Republican agenda doesn’t change. Governors and state legislatures were so quick to embrace people of color in order to avoid the impression, they too share Trump’s supreme affinity for the white race. But if they don’t stand up for them they are not indirectly, but directly enabling the agenda of those same racists that Republican members were so quick to condemn via Twitter.

Gerrymandering, strict voter ID laws, felon disenfranchisement are all aimed at one outcome: a voting class that is predominantly white, and in turn majority Republican.

The white supremacist chant of, “you will not replace us,” could easily and accurately be the slogan for these Republican politicians. Their policies will achieve the same racial outcome as Jim Crow – the disenfranchisement and marginalization of people of color.

It is a sad day when more CEOs take action by leaving and shutting down Trump’s Strategy and Policy Forum, and Manufacturing Council, than elected officials take action leaving Trump’s “election integrity” commission.

Businessman are acting more responsive to their customers than politicians are to their voters. At the end of the day, which presidential council is more dangerous? Which most embodies the exact ideology that Trump spewed on Monday? A group of businessmen coming together to talk jobs or a group of elected officials coming together to disenfranchise voters of color?

Anyone still sitting on the voter suppression commission is enabling Trump’s agenda and that of the white Nazi militia that stormed Charlottesville to celebrate a time when the law enforced white supremacy.

If Republican lawmakers want to distinguish themselves from Trump’s comments, they need to do more than type out 144 characters on their phone. They need to take a hard look at their party’s agenda.

Let’s see strict voter ID laws criticized with the same vitriol that Republicans used in responding to the events in Charlottesville. Let’s see Republicans call out their own agenda, and openly recognize the connection between the agenda of the racist alt-right and that of the Republican party.

Russ Feingold is a former Senator for Wisconsin