Homeland Security shifted $10 million from FEMA for crackdown on immigration 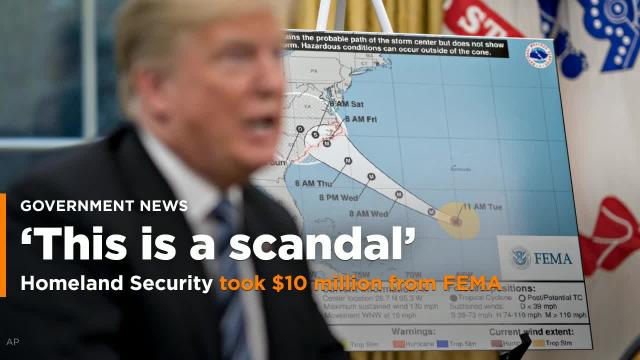 The Trump administration transferred nearly $10 million from the Federal Emergency Management Agency earlier this year to fund immigrant detention and deportation efforts, according to a document released Tuesday by Sen. Jeff Merkley (D-Ore).

The lawmaker first shared the documents with MSNBC’s Rachel Maddow, saying that the Department of Homeland Security requested the money “just as hurricane season [was] starting” and as it was attempting to fund Immigration and Customs Enforcement in the midst of its new “zero tolerance” immigration policy. The controversial crackdown resulted in the separation of thousands of migrant children from their parents, hundreds of whom have yet to be reunited.

“This is a scandal. At the start of hurricane season — when American citizens in Puerto Rico and the U.S. Virgin Islands are still suffering from FEMA’s inadequate recovery efforts — the administration transferred millions of dollars away from FEMA,” Merkley said in a statement to HuffPost. “And for what? To implement their profoundly misguided ‘zero tolerance’ policy. It wasn’t enough to rip thousands of children out of the arms of their parents — the administration chose to partly pay for this horrific program by taking away from the ability to respond to damage from this year’s upcoming and potentially devastating hurricane season.”

The document’s release comes just days before Hurricane Florence, a powerful Category 4 storm, is expected to make landfall in the Carolinas’. Millions of people are currently evacuating or hunkering down.

“$10 million comes out of FEMA when we’re facing a hurricane season knowing what’s happened last year,” Merkley told Maddow on Tuesday. “And look what we’ve had since, a hurricane just barely miss Hawaii. … Now we have this hurricane, Florence, bearing down on the Carolinas.”

DHS spokesman Tyler Houlton late Tuesday called the senator’s appearance a “sorry attempt to push a false agenda,” saying the administration was instead “focused on assisting millions on the East Coast facing a catastrophic disaster.”

“The money in question — transferred to ICE from FEMA’s routine operating expenses — could not have been used for hurricane response due to appropriation limitations,” Houlton wrote on Twitter. “DHS/FEMA stand fiscally and operationally ready to support current and future response and recovery needs.”

The document released by Merkley, which was supplied to HuffPost, states that more than $2.3 million from a total of about $9.8 million had been diverted from FEMA’s “response and recovery” budget. Other funding was transferred from regional operations, mitigation efforts, preparedness and protection, and mission support budgets.

The amount transferred is less than 1 percent of FEMA’s budget for the fiscal year, according to the document, which also notes that the agency’s “mission impact” would be minimized as FEMA would only be required to “curtail training, travel, public engagement sessions, IT security support and infrastructure maintenance, and IT investments.”

The Department of Homeland Security has the authority to move a limited amount of money around within its budget. In the past, Congress had limited DHS from shuffling more than $5 million from one approved program to another through the process known as “reprogramming.”

A coalition of human rights groups penned a letter on June 27 asking the Senate Committee on Appropriations to oppose attempts by DHS to up the amount of funding for immigrant detention, accusing the department of “dramatically overspending its appropriated budget in ways both morally reprehensible and fiscally irresponsible.”

The $10 million of additional funds that DHS aims to use to expand immigrant detention amounts to less than 1 percent of the ICE budget for locking up immigrants, which tops $1.4 billion.