Long before the storm dropped barrels of rain over one of the world’s largest industrial corridors, the area was rife with potentially dangerous chemicals

It was 2 am Texas time on Thursday when the Arkema chemical plant in Crosby caught fire and exploded. Flooded by Hurricane Harvey’s torrential rains, the plant lost power and refrigeration, and soon thereafter lost control of highly flammable organic peroxides it produces for use in paints and polystyrenes. The explosion cast a 30ft plume of toxic smoke over an evacuated Crosby.

But the explosion of Arkema, as dramatic as it was, is hardly the only source of chemicals potentially dangerous to Texans.

“Houston would be the largest hub of petrochemical and refining production capacity in all of North and South America,” said Trey Hamblet, the vice-president of global research for chemical processing at Industrial Info Resources Inc, a company that tracks chemical manufacturing worldwide.

The Texas-Louisiana border is home to a melange of 840 petrochemical, refining and power plants operated by some of the world’s largest companies, according to Industrial Info. Valero, ExxonMobil and Shell Oil all operate plants here. The area is arguably one of the largest industrial corridors on earth.

Most shut down safely before and during the storm, but the contamination they cast over the area existed long before Harvey dropped barrels of rain over the low-lying area.

“In many ways Harvey is unprecedented – with the level of rain – but the difference is we had all of the information,” said Charise Johnson, a researcher for the Union of Concerned Scientists who has worked with neighborhoods in Houston that are surrounded by the same chemical plants. “We had it all. We knew how to prepare the communities. We knew how to prepare infrastructure. But that didn’t happen.”

Neighborhoods like Manchester, on Houston’s east side, reportedly stank of gas for days after the storm without explanation. Many assumed it was because a tank spilled an “unspecified” amount of its 6.3m gallon capacity.

Tightly framed by bayous, freeways and a huge refinery, Manchester has notoriously bad air quality, even by Houston’s standards. Several residents there said they did not flood and added that the air quality on Thursday was not noticeably worse than normal. 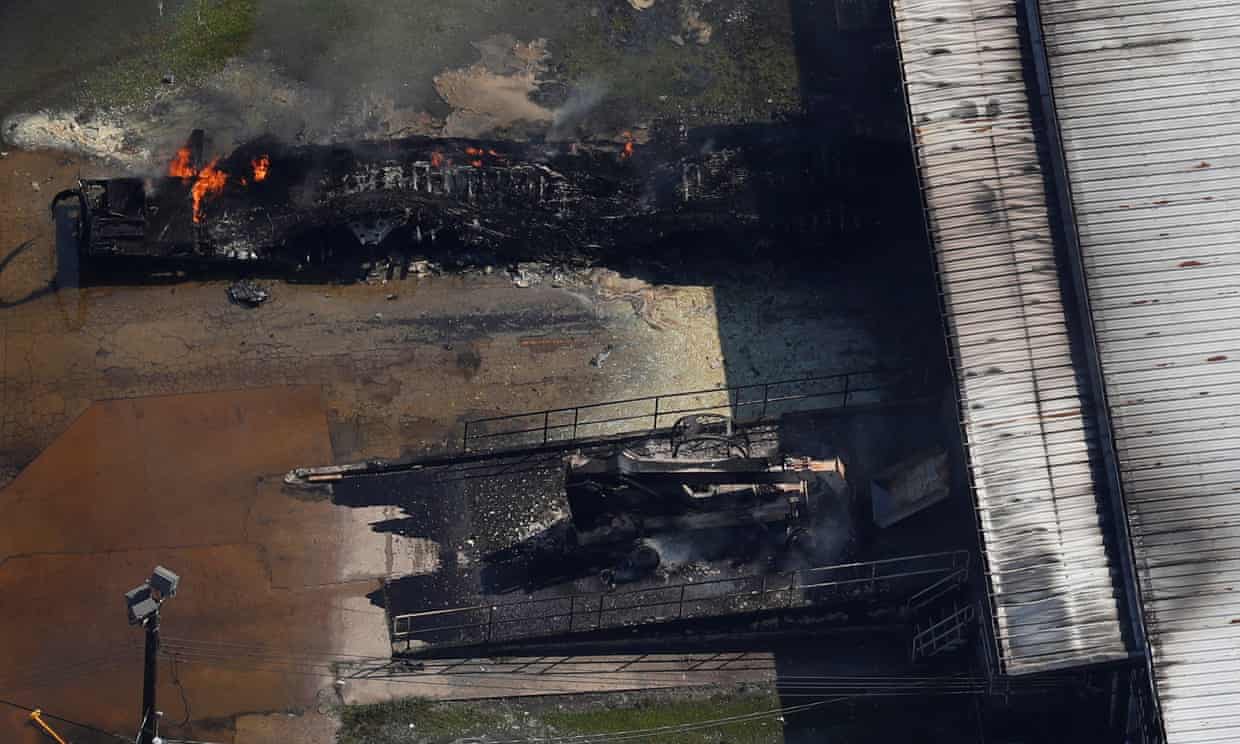 A fire burns at the flooded plant of French chemical maker Arkema in Crosby, Texas on Thursday. Photograph: Adrees Latif/Reuters

But the Texas commission on environmental quality received dozens of reports of compromised infrastructure in Harvey’s wake.

The second largest oil refinery in the country, a Baytown facility belonging to ExxonMobil, had a roof collapse and released pollutants into the air. Shell reported similar incidents due to heavy rains. Two tanks holding crude oil burst into flames near a wildlife preserve outside of Port Arthur after lightning struck the Karbuhn Oil Co.

About 20 miles east of Manchester along the Texas Independence Highway, where storage tanks are decorated with murals of the Battle of San Jacinto, there was a faint acrid smell in Baytown, a city of over 75,000 people.

Waiting for his order at the Taqueria Margarita taco truck, Marco Paz, a 21-year-old student, said that for the first time, some members of his family “were having trouble breathing and [getting] headaches” that lasted about two days at the height of the flooding.

Nearby, in the almost-deserted Town Square park, Canaan McKiernan strummed his guitar while his friend, Toby Smith, played with a wooden catch-ball toy.

“The chemical plants are… a mile or two away and the whole time during the hurricane you could see the flames [flaring] from way far, even in the rain; but it’s not the only time it does that, it does that kind of regularly,” McKiernan said. “I’ve lived here my whole life so you get used to it.”

Smith, 17, recently moved back to the area and said the air quality is “horrible”, especially given the heat and humidity of south Texas. “I feel like sometimes it just gets like harder to breathe, especially if you’re running or exercising sometimes. It’s just like, I’m more out of breath than I was up in Indiana,” he said.

“There are so many people in this town that work for them,” McKiernan, a 19-year-old student, said. “Unfortunately in the state that we live in and the area we live in it’s kind of a necessary evil. I mean, if Exxon wasn’t there then this whole town would be shit.”

Environmental worries did not stop when Harvey’s record-breaking rains abated.

“Our biggest concern is now that the flood water has receded is the flood water carried… a number of chemicals in the homes,” said Yvette Arellano, a researcher for Texas Environmental Justice Advocacy Services, better known as “Tejas”. “Our major priority we’re focusing on [is] cleanup.”

“We don’t even know what the complex mixtures are at this point,” said Garrett Sansom, an environmental scientist at Texas A&M University, who works in Manchester. “They’ve been dealing with areas of poor environmental conditions with the air and standing water, with heavy metals, polycyclic hydrocarbons,” he said, mentioning chemicals that come off of burnt materials.

For example, within one mile of Manchester, there are 11 generators of hazardous waste, nine major air polluters, eight storm water discharge facilities and four factories that treat, store or dispose of hazardous waste, according to one of Samson’s studies.

Tests of surface water in the area found the heavy metal barium in every sample. Arsenic, barium, chromium, lead and mercury were found in water two blocks from a public park.

In another study, the Union of Concerned Scientists found significantly higher cancer risks and respiratory hazards in Manchester than in other areas of Houston. Yet another study found benzene, a known carcinogen, belching out of pipelines below the ship channel near Manchester.

However, where water might have carried chemicals and metals since the neighborhood was inundated is unclear. Sansom is bringing his team to Manchester to collect samples on Friday afternoon.

“It’s usually a pretty complex mixture of chemicals that were already present in the environment and sewage and wildlife, like snakes,” said Samson about flood waters.
Others, like Johnson, hoped the loss of life and property might bring something else – hope.

“Doing environmental work in a place like Texas – where officials deny climate change is even happening – is extremely difficult. It’s a tough road, and they’ve been fighting this fight for a long time,” she said. “All I hope now is after this tragedy maybe people will start to listen, maybe they’ll take action”.