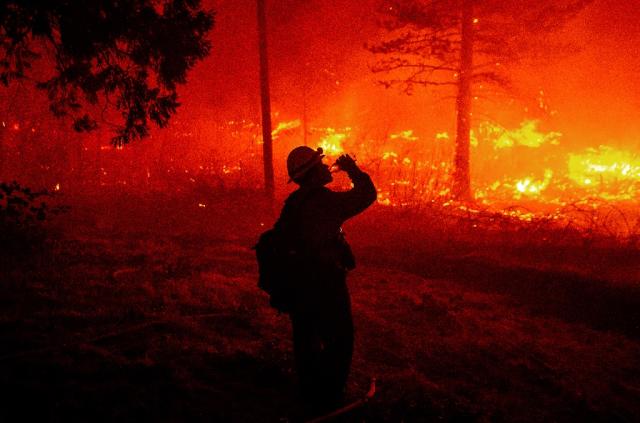 Experts say there are clear links between climate change and increases in the intensity and frequency of extreme weather — such as droughts, wildfires, heatwaves, floods and cyclones (AFP Photo/JOSH EDELSON)

Paris (AFP) – Scientists monitoring the Earth’s climate and environment have delivered a cascade of grim news this year, adding a sense of urgency to UN talks starting Sunday in Poland on how best to draw down the greenhouse gases that drive global warming.

The 2015 Paris Agreement calls on humanity to block the rise in Earth’s temperature at “well below” 2 degrees Celsius (3.6 Fahrenheit) compared to pre-industrial levels, and 1.5 C if possible.

Here is a summary of recent findings:

Earth’s average surface temperature from January to October 2018 was one degree Celsius (1.8 degrees Fahrenheit) higher than the 1850-1900 baseline.

Long-term warming is caused by the accumulation of heat-trapping greenhouse gases in the atmosphere, especially carbon dioxide (CO2) cast off when fossil fuels are burned to produce energy.

Seventeen of the hottest years on record have occurred since the start of the 21st century, with 2018 ranking as the 4th warmest.

The concentration of carbon dioxide (CO2) in the atmosphere reached 405.5 parts per million (ppm) in 2017, the highest in at least three million years and a 45 percent jump since the pre-industrial era.

The last time CO2 was at that level, oceans were 10-20 meters higher.

Concentrations of the second most important greenhouse gas, methane (CH4), have also risen sharply due to leakage from the gas industry’s fracking boom and flatulence from expanding livestock.

After remaining stable for three years, carbon pollution increased more than one percent in 2017 to 53.5 billion tonnes of CO2-equivalent, a measure which includes all main greenhouse gases. Emissions are on track to climb again in 2018.

To cap global warming at 2 C, emissions must decline a quarter within a dozen years. To stay under 1.5 C, they will have to drop by more than half.

But long-term trends are unmistakable: Arctic sea ice cover is declining at a rate of more than 13 percent per decade, relative to the 1981-2010 average.

Climate models predict the Arctic Ocean could, in some years, be ice-free as early as 2030.

The World Meteorological Organization (WMO) says there are clear links between climate change and increases in the intensity and frequency of extreme weather.

The number of climate-related extreme events — such as droughts, wildfires, heatwaves, floods and cyclones — has doubled since 1990, research has shown.

The intensity of typhoons battering China, Taiwan, Japan and the Korean Peninsula since 1980 has increased by 12 to 15 percent.

Natural disasters drive more than 25 million people into poverty every year, according to the World Bank, and cause annual losses in excess of half a trillion dollars (440 billion euros).

Water that expands as it warms and runoff from ice sheets atop Greenland and Antarctica currently add about three millimeters (0.12 inches) to sea levels per year. Since 1993, the global ocean watermark has gone up by more than 85 mm (3.3 inches).

That pace is likely to pick up, threatening the homes and livelihoods of tens of millions of people in low-lying areas around the world.

Melting glaciers could lift sea levels a meter (three feet) by 2100, and — with only 2 C of warming — by several meters more over the following centuries.

Of the 8,688 animal and plant species listed as “threatened” on the International Union for the Conservation of Nature’s (IUCN) Red List, a fifth have been hit by climate change.

From 1970 to 2014, the global population of vertebrates — birds, reptiles, amphibians, mammals and fish — plummeted by about 60 percent, due mainly to killing for food or profit, and habitat loss.

The number of species is declining 100 to 1,000 times faster than only centuries ago, which means the planet has entered a “mass extinction event” — only the sixth in the last half-billion years.Sources: NASA, NSIDC, UNEP, WMO, IPCC, peer-reviewed studies.

Brussels (AFP) – Tens of thousands of marchers took to the streets of Brussels on Sunday to mark the start of the UN climate summit in Poland.

Organizers said the event was the biggest climate march ever in Belgium, with 65,000 protesters braving steady drizzle, according to police.

The well-mannered crowd was filled with activists and many families, with children holding placards asking politicians to fight harder to assure a greener future.

Speaking through a blow-horn, activist Evert Nicolai of Oxfam Action urged leaders to do what was needed towards fighting climate change.

“Politicians where are you? You have to be with us, the people. There is no planet B,” Nicolai said.

The march, dubbed Claim The Climate, ended with speeches and performances at the Parc Cinquantenaire that overlooks the European Union institutions.

Public transport throughout the city was free on Sunday for the occasion and the SNCB national train service offered a cut-rate ticket of five euros.

Trains from other Belgian cities were packed with protesters, with many complaints on social media that the SNCB had not adequately anticipated the surge in travelers.

The protest was timed for the launch of the COP24, the UN climate summit where officials from 200 nations will aim to boost efforts to avert runaway climate change.