EPA move on chemical study may trip up Pruitt

Pruitt has blamed partisan witch hunts for the controversies around his spending and lobbyist ties. He’ll struggle to make the same case this time. 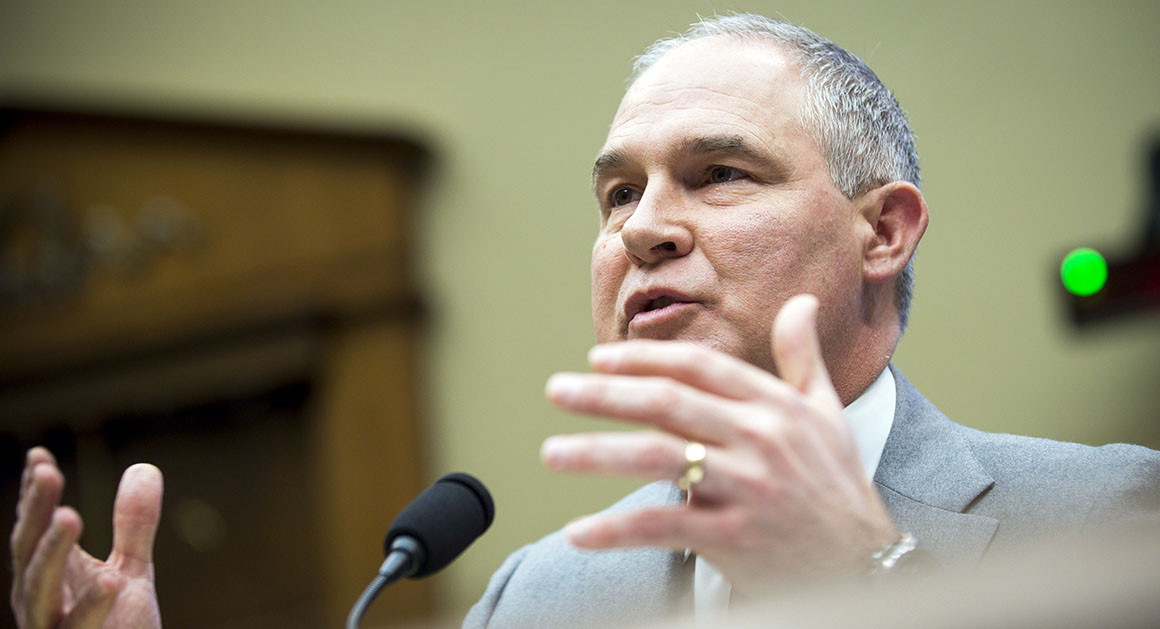 When Scott Pruitt returns to Capitol Hill Wednesday, he will likely be asked to explain why EPA helped to bury a federal study that would have increased warnings about toxic chemicals found in hundreds of water supplies across the country. | Pete Marovich/Getty Images

EPA Administrator Scott Pruitt is facing a new controversy over chemical contamination that could prove even more damaging than his spate of recent ethics scandals.

When Pruitt returns to Capitol Hill Wednesday, he will likely be asked to explain why EPA helped to bury a federal study that would have increased warnings about toxic chemicals found in hundreds of water supplies across the country. A handful of Republicans were quick to demand answers after POLITICO reported Monday that senior aides to Pruitt intervened after the White House warned of a “public relations nightmare” from the impending Health and Human Services Department assessment.

While Pruitt has said partisan witch hunts are to blame for the controversies around his first-class travel, extensive security spending and friendliness with lobbyists, he will struggle to make the same case this time. Emails released under the Freedom of Information Act indicate the HHS study was being prepared for release in January, before EPA intervened. It has not been made public more than three months later, and the agency producing it says it has no timeline for doing so.

Long used in Teflon and firefighting foam, the chemicals PFOA and PFOS are linked with certain cancers, thyroid problems and life-threatening pregnancy complications. Studies have found them in 98 percent of Americans’ blood, and communities from West Virginia to Michigan to New York have been in an uproar after discovering that their drinking water has been contaminated with the chemicals.

Tristan Brown, who served as the Obama administration’s liaison between EPA and members of Congress when the agency issued a health advisory for PFOA and PFOS in 2016, said that lawmakers on both sides of the aisle are deeply concerned about the issue. He said anger over the Trump administration’s interference could snowball if powerful Republicans who have experienced contamination in their states speak out strongly.

“That could be the beginning of a breach of the dam,” Brown said.

Already, key Senate Republicans have shown their willingness to break with the Trump administration when it comes to chemical contamination. In December, North Carolina’s two Republican senators came out in opposition to the administration’s nominee to head EPA’s chemical safety office, industry consultant Michael Dourson, in part because of a crisis in their home state with a chemical similar to PFOA and PFOS, called GenX.

At least three Republican lawmakers have joined a host of Democrats in demanding answers from the Trump administration about the HHS study.

Sen. Shelley Moore Capito of West Virginia, which experienced a major chemical spill a few years ago and has a major PFOA and PFOS problem, said she wants to see the study made public.

“It’s important that the findings of the study are released so we can determine the health impacts and any potential threats our communities may face as a result of exposure to perfluorinated chemicals. I would encourage the administration to look into this matter,” Capito, a member of the Appropriations subcommittee with EPA jurisdiction, where Pruitt will testify Wednesday, said in a statement to POLITICO.

“It would be unacceptable if the political considerations of those at the highest levels of the EPA led to the suppression of information concerning the public health of Americans,” Rep. Brian Fitzpatrick (R-Pa.) said in a statement. “The EPA must provide my constituents with answers to these allegations immediately.”

“It is vital that there are proper measures in place to perform accurate, expeditious, scientific assessments for chemicals that pose a threat to public health,” he said in a statement to POLITICO, citing his state’s “tragic history” with chemical contamination.

Pruitt says he is taking the chemicals issue seriously. Not long after the North Carolina senators torpedoed the chemicals nominee, Pruitt announced a “leadership summit” on PFOA, PFOS and related chemicals that is scheduled to be held at EPA headquarters next week.

But few are expecting his response to include any new regulatory action.

EPA has not regulated a single new contaminant under the Safe Drinking Water Act in more than two decades. The agency’s 2016 drinking water advisory only provided advice to the states and local water managers — it set no mandatory limits.

And Pruitt’s EPA doesn’t even plan to go that far for other chemicals. The agency’s No. 2 water official, Dennis Lee Forsgren, has told drinking water groups that under Pruitt, the agency won’t issue any new health advisories for GenX or other chemicals.

Betsy Southerland, a career staffer who led work on the 2016 health advisory as director of science and technology at EPA’s water office before resigning last year, said states would have to translate the information provided by EPA about the chemicals into health advisory levels or drinking water limits on their own, something few are equipped to do.

Pruitt’s “not allowing EPA to provide the state with that expertise,” she said.

EPA spokesman Jahan Wilcox, defending the agency’s approach, said officials are “stressing that all options — not just health advisories — are on the table as we move into the National Leadership Summit and taking additional steps to address PFAS.”