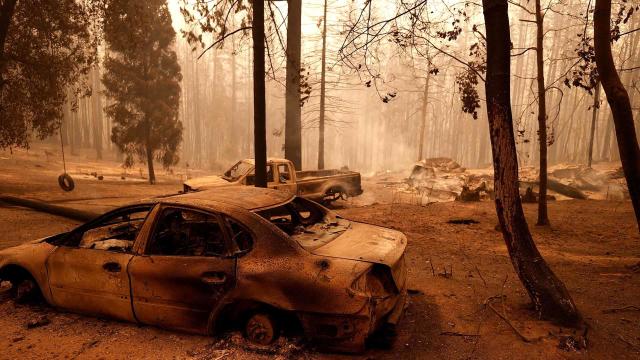 Wildfires continued to rage out of control throughout California and the Pacific Northwest on Wednesday, killing at least six people and devastating half a dozen towns in Oregon.

Oregon Gov. Kate Brown said that in the last 24 hours, the state had “experienced unprecedented fire with significant damage and devastating consequences.”

“This could be the greatest loss of human lives and property due to wildfire in our state’s history,” she said at a news conference.

In Washington State, Commissioner of Public Lands Hilary Franz said that a child had died in one of the state’s largest wildfires, the 163,00-acre Cold Springs fire. The blaze is burning mid-way between Spokane and Seattle. Franz didn’t offer details but said she was devastated by the death.

“The pain that family is going through is unfathomable,” she said.

In Oregon, wildfires burning east of the state capital tore through the small city of Lyons, killing Wyatte Tofte, 12, and his grandmother, Peggy Mosso, according to the boy’s father, Christopher Tofte. The boy’s mother, Angela Mosso, suffered severe burns and is in critical condition, he said.

And in Butte County, California, where the state’s deadliest fire on record killed 85 people and all but destroyed the town of Paradise two years ago, the remains of three people were found Wednesday after a wildfire burned through the area, Sheriff Kory Honea told reporters.

Two people were found at the same location, Honea said. The third was found elsewhere. Honea declined to provide additional details until the remains are identified.

In Southern Oregon, officials in the town of Talent told their 6,600 residents to stay outside the city limits because there’s scant electricity and it’s not safe stepping around fallen power lines.

While City Hall, the police department and other government buildings survived, there were whole neighborhoods and blocks of businesses completely gutted by the blaze.

“The fire ripped through the core of our (Oregon Route) 99 corridor,” the main stretch of town, Talent Mayor Darby Ayers-Flood told NBC News. “Where it burned, it burned completely and totally. I’m exhausted and shocked by it.”

City officials were hoping that their fast-acting residents, who evacuated Tuesday and Wednesday, would keep deaths at zero.

“I believe that most everyone is safe, it could have been far worse,” Ayers-Flood said.

Brown enacted a fire conflagration act for the first time in state history, with at least 35 fires scorching more than 300,000 acres of land in Oregon.

“Our number-one priority right now is saving lives,” Brown said on Twitter Wednesday. During the news conference, she said that six towns in Marion, Lane, and Jackson counties have been “substantially destroyed.”

Meanwhile, up the road in Medford, residents in the southern end of the city were ordered to evacuate on Wednesday as the Almeda Fire made its way north.

“Level 3 (evacuation order), that’s as serious as it gets,” Rudy Owens, spokesman for the Oregon Office of State Fire Marshal, said of the emergency actions taken in and around Medford.

Huge swaths of tinder-dry brush across the western U.S. were ablaze on Wednesday as firefighters battled flames, hot weather and high winds.

There were 14,000 firefighters on the lines in California as 28 wildfires burned out of control, according to the California Department of Forestry and Fire Protection (Cal Fire).

Near the Oregon border, a fire that began Monday had exploded to 30,000 acres by Wednesday and destroyed an estimated 150 homes in the small community of Happy Camp, the U.S. Forest Service said.

In the central part of the state, the Creek Fire had consumed nearly 167,000 acres by Wednesday evening, officials said. In Butte County, the blaze that killed three people, the Bear Fire, prompted evacuation warnings for part of the town of Paradise.

Before Wednesday, wildfires had killed eight people in California, including five during the LNU fire, which was sparked by a rare summer thunderstorm last month. The state has seen a record 2.5 million acres burn this year.

While these flames were burning well outside the state’s biggest cities, their smoke had enveloped large urban cores.

An eerie orange and brown glow filled the sky above the Bay Area, a mixture of fog and smoke from the fires that cast San Francisco in a perpetual rust colored haze on Wednesday.

Citing the “unprecedented” and “historic fire conditions” in California, 10 national forests were ordered closed on Wednesday, meaning that all 18 national forests in the state were shut down.

“These temporary closures are necessary to protect the public and our firefighters, and we will keep them in place until conditions improve and we are confident that National Forest visitors can recreate safely,” Regional Forester Randy Moore said in a statement.

Wildfires in the state of Washington also continued to burn on Wednesday, with more than 576,400 acres charred since a series of blazes were touched off on Labor Day, said state Department of Natural Resources spokesman Joe Smillie.

In the small community of Malden, near the Idaho state line, most of the town was destroyed by a fast-moving blaze that swept through the area Monday. Larry Frick, who stayed and fought the fire as it surrounded his home, compared the scene Wednesday to a war zone.

“There were explosions going off non-stop and some really big ones where I could feel it shake the ground,” he said in an interview.

Frick said he tried to save his neighbor’s house, but the wind-whipped flames roared through its facade, reducing the structure to rubble in what seemed like minutes. The fire, which has destroyed 98 buildings, had grown to nearly 18,000 acres by Wednesday, fire officials said.