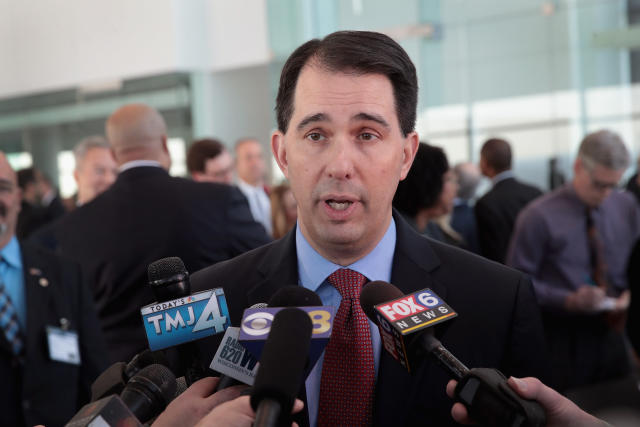 Wisconsin Democrats scored a major upset victory Tuesday night, winning a state Senate seat in a district that went for Donald Trump by double digits in 2016.

Caleb Frostman defeated state Rep. Andre Jacque (R) for the open seat in District 1 that was previously held by state Sen. Frank Lasee (R), who resigned to take a job in Gov. Scott Walker’s administration. Frostman will be on the ballot again in November for the regular election.

Republicans held on to a state Assembly seat in District 42 that also held a special election Tuesday.

Although Frostman’s term is short, his win is a huge victory for the Democratic Party. Not only was the seat held by a Republican, but Trump defeated Democratic rival Hillary Clinton there by 17 points in the 2016 presidential election. Trump also won the state of Wisconsin overall.

“Tonight is a good night for Wisconsin Democrats,” said state party chair Martha Laning. “We continued a winning streak by flipping a red seat blue and electing Caleb Frostman to the state Senate, a 21-point swing from Trump’s 2016 performance.”

Frostman’s win is especially sweet for Democrats because Walker tried to prevent Tuesday’s contests from taking place to begin with. Both the vacancies were created when Walker tapped the incumbents to join his administration in December.

State law requires the governor to call special elections for vacancies that take place before May in an election year, but Walker had refused to do so.  He planned to keep them vacant until the regular elections in November. The National Democratic Redistricting Committee, a group led by former Attorney General Eric Holder, sued Walker ― and won.

Walker reluctantly called these special elections in March, knowing full well that Democrats had a real shot at flipping the seats.

In January, Democrat Patty Schachtner also had a surprise victory in a state Senate special election, succeeding in another district that had been held by Republicans and went to Trump by 17 points. At the time, Walker called the results a “wake-up call” for Republicans that there was a potential blue wave of Democratic wins coming in November.

“Scott Walker and his Republican allies gerrymandered this district for their own partisan benefit,” said Holder on Tuesday night, “but the citizens of Wisconsin are clearly speaking out this year to demand a state government that better represents their values.”

Democrats have flipped 43 state legislative seats from red to blue since Trump became president. Republicans have flipped seven from blue to red.