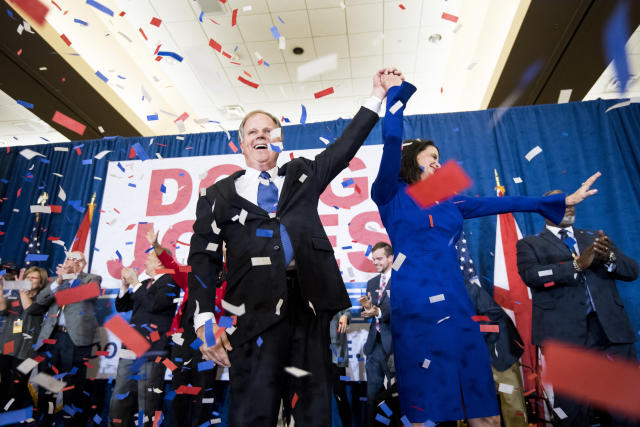 With 95 percent of the votes counted in a race in which the lead shifted back and forth, the Associated Press declared Jones the winner.

Jones, a former U.S. attorney who prosecuted Ku Klux Klan members for an infamous 1963 church bombing in Birmingham, will be the first Democrat to represent deep-red Alabama in the Senate in 20 years. He fills the seat left vacant by Attorney General Jeff Sessions, and is not up for re-election until 2020.

A stunned looking Jones told supporters at a victory party that he didn’t know “what the hell to say” before recovering and launching into a thank you speech. “I always believed that the people of Alabama had more in common than divided us,” the senator-elect said. “We have shown the country the way that we can be unified.”

Jones said his win was a message to lawmakers that people want them to work together.

“Take this election from the great state of Alabama … and go ahead and fund that CHIP program before I get up there!” Jones said, referencing a children’s health insurance program that the GOP-controlled Senate has left unfunded for more than two months.

Moore appeared briefly in front of his supporters late Tuesday night and, refusing to concede, suggested there may be a recount in the election. “That’s what we’ve got to do: Wait on God,” Moore said, adding that he was upset that the media had portrayed his campaign unfavorably. Recounts are automatically triggered by wins of .5 percent and less—Jones’s lead is 1.5 percent with 99 percent of ballots counted.

The upset is a major embarrassment for President Donald Trump, who threw his full support behind Moore even after multiple allegations emerged that he had pursued sexual relationships with teenagers as an adult. 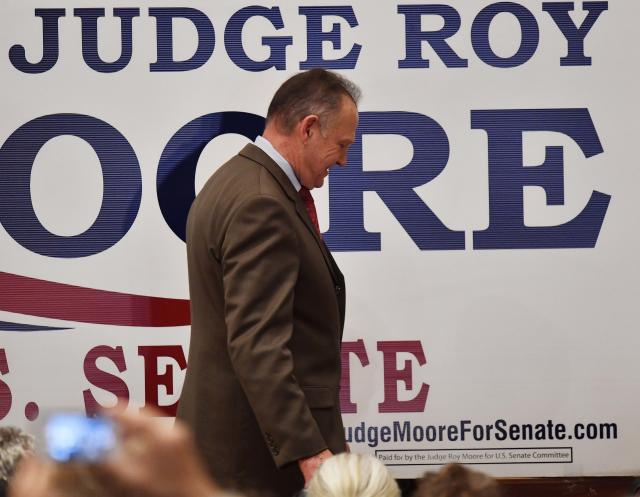 But shortly after Jones’ victory was solidified, Trump sounded a conciliatory note on Twitter.

“Congratulations to Doug Jones on a hard fought victory,” the president said. “The write-in votes played a very big factor, but a win is a win. The people of Alabama are great, and the Republicans will have another shot at this seat in a very short period of time. It never ends!”

Jones’ upset also a shot in the arm for Democrats, who are hoping that anger at Trump and congressional Republicans will fuel a “wave” election in 2018, flipping the U.S. House of Representatives, and perhaps even the Senate, blue.

Moore, a former judge who was removed from office twice before running for the Senate, was caught off guard by the allegations against him. One woman said Moore touched her sexually when she was 14; another said he sexually assaulted her when she was just 16 years old and he was an assistant district attorney.

Moore vehemently refuted the allegations, but several high-profile Republicans, including Senate Majority Leader Mitch McConnell, said they believed the women, who made the accusations on the record. Trump, however, never abandoned Moore, even cutting a robocall for him in Alabama that called Jones a “puppet of Nancy Pelosi and Chuck Schumer.” Trump won the state last year by 28 points, and his failure to push Moore over the finish line could spell trouble for the unpopular president’s political strategy going forward.

Moore’s troubled candidacy unexpectedly turned one of the most Republican states in the country into a battleground, with Moore leading his Democratic opponent by just 2 percentage points in an average of polls. In the end, Jones won, driven by high turnout in black communities and low turnout in whiter, rural parts of the state. 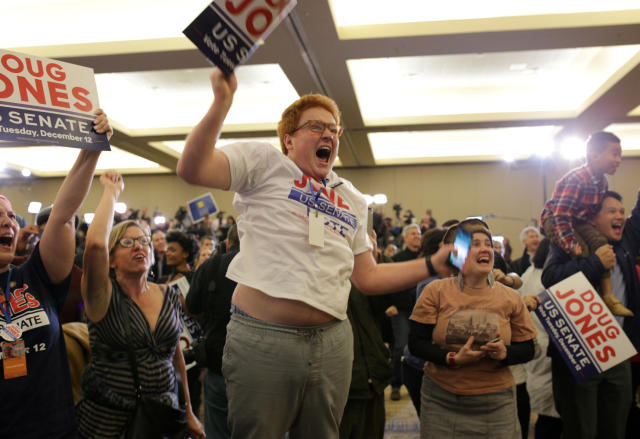 Jones’s victory also endangers Republicans’ tax reform legislation in Congress, which passed by a narrow majority in the Senate earlier this month. Both the Senate and the House will have to pass another combined version of the tax bill to send it to the president’s desk. With one fewer Republican in the chamber, McConnell can lose only one vote and still push through the bill, which has not attracted any Democratic support. Sen. Bob Corker, R-Tenn., has already voted against the legislation once, and Sen. Susan Collins, R-Maine, has made several demands regarding health care that must be met before she’ll support it again. McConnell could rush the vote before Jones is seated in January, however.

Though Moore’s defeat reduces McConnell’s razor-thin majority in the Senate, it also means Senate Republicans will not be associated with someone accused of abusing children.  Many Senate Republicans were openly hoping Moore would lose, and Sen. Jeff Flake, R-Ariz., tweeted after Jones’s victory that “decency” had won the night. They’ll also avoid what would have been a contentious ethics investigation and potential expulsion vote for Moore. Sen. Cory Gardner, R-Colo., put out a statement Tuesday night urging Jones to vote with Republicans in the Senate.

The loss will likely fuel the intra-conservative war between former White House strategist Steve Bannon, who fueled Moore’s populist candidacy, and McConnell and other establishment Republicans. Bannon has threatened to mount primary challenges against some mainstream Republican senators with insurgent candidates like Moore. McConnell has argued that extreme candidates have trouble winning general elections, and that Bannon should butt out.

Jones ran a vigorous campaign up to the end, targeting the state’s black population last weekend. He brought in Sen. Cory Booker, D-N.J., and Rep. Cedric Richmond, D-La., to stump for him. Jones also ran ads featuring prominent Republicans, including Sen. Richard Shelby, R-Ala., disavowing Moore, in a bid to peel off conservatives.

“If you don’t believe in my character, don’t vote for me,” Moore said then.