Chicago will be colder than Antarctica this week; 250 million in U.S. will see freezing temperatures 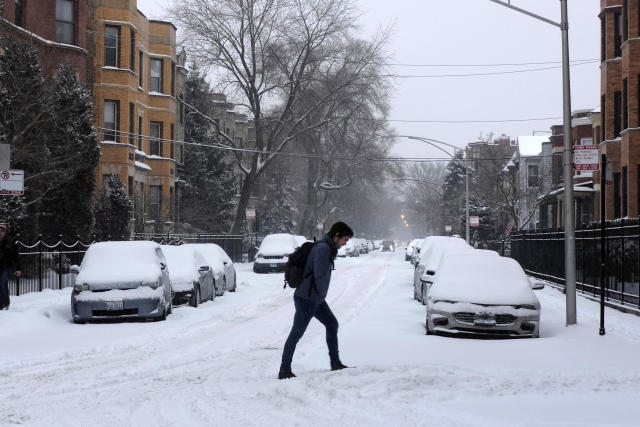 The season’s most wintry roar threatened to paralyze a wide swath of the nation Tuesday as temperature records began falling fast. Parts of New York braced for up to four feet of snow, and Atlanta awaited a blast of rain, snow and cold that could bring chaos to travelers headed for the Super Bowl.

Temperatures will plummet and winds will howl as parts of the Midwest and East are overwhelmed by the polar vortex swooping down from the North Pole.

In Chicago, schools were already ordered shut for Wednesday because of wind chill temperatures that AccuWeather meteorologist Elliot Abrams said could make it feel like 50 to 60 degrees below zero. That would be colder than Antarctica.

“It’s never been -50 in Chicago so we can’t really say it ‘feels like’ – nobody really knows what that feels like,” Abrams said. “But you can get frostbite within four or five minutes.”

Cold weather: 8 things you shouldn’t leave in your car during polar vortex

The wind chill in Minneapolis was forecast to reach a stunning 54 degrees below zero Wednesday morning, prompting the University of Minnesota to cancel classes.

In Wisconsin – another state familiar with brutally cold winters – parts of the state were hit with a foot of snow or more Monday. School districts, government agencies and businesses were poised to remain closed deep into the week due to the cold, and Gov. Tony Evers declared a state of emergency because of the snow and cold.

“The intensity of this cold air, I would say, is once in a generation,” said John Gagan, a National Weather Service meteorologist based in Sullivan, Wisconsin.

“People can’t last outside even for minutes,” he tweeted. “What the hell is going on with Global Waming? Please come back fast, we need you!”

Indianapolis could see record-breaking cold Tuesday night, with wind chills as low as 40 degrees below zero expected, the weather service warned, adding that frostbite could occur on exposed skin in as little as 10 minutes.

“This is polar air,” said Mike Koch, a senior meteorologist with the weather service in Indianapolis. “That should tell you something.” 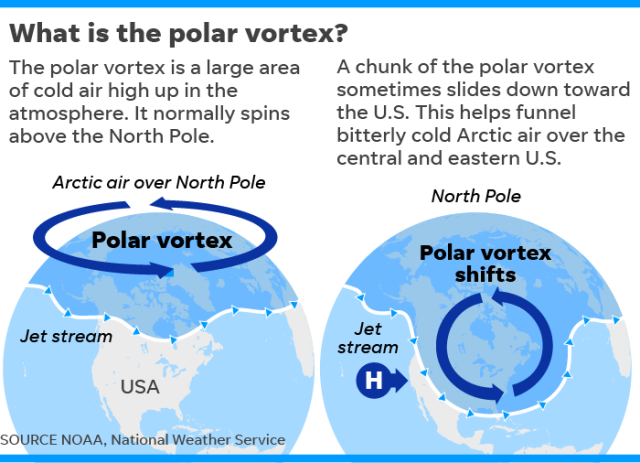 More: Polar vortex? Back in the day, we called it ‘winter’

Late Monday, Michigan Gov. Gretchen Whitmer declared a state of emergency to “help address threats to public health and safety related to forecast sub-zero temperatures over the next few days.”

“Keeping Michiganders safe during this stretch of dangerously cold temperatures is our priority. Such widespread, extreme conditions have not occurred in Michigan for many years and it is imperative that we are proactive with record-low temperatures being predicted by the weather service,” Whitmer said in a statement.

In Buffalo, AccuWeather warned that heavy lake-effect conditions could pound the city with up to 2 feet of snow. Up to 4 feet of snow may fall just 5 to 10 miles south of the city, AccuWeather forecast. Watertown and Sandy Creek, New York, could receive between 3 and 6 feet, AccuWeather said.

As cold and snow slam into the North, a snowstorm pasted portions of the Deep South on Tuesday.

AccuWeather meteorologist Rob Richards said, “Atlanta could receive a coating to an inch of snow.” Sleet and ice were also expected. Hundreds of flights in and out were canceled, days before the Super Bowl, in a city not accustomed to combating such weather.

Sunday, a prelude to the polar plunge slammed into the Upper Midwest with temperatures reaching below zero in the morning. The low of 45 degrees below zero in International Falls, Minnesota, smashed a record that stood for more than half a century. 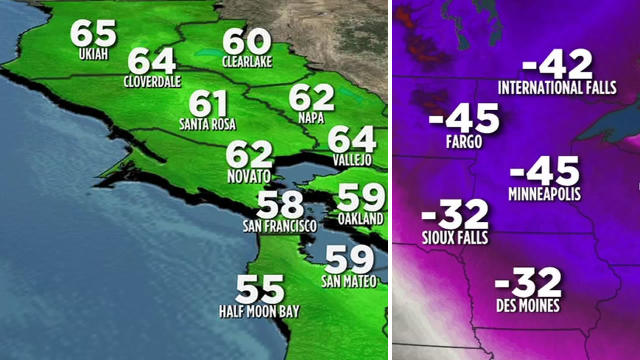 Parts of the country are set to reach temperatures that are so low, the Bay Area may be 90 to 100 degrees warmer than they are.