Ukraine releases video of weapons it says were left in Bucha 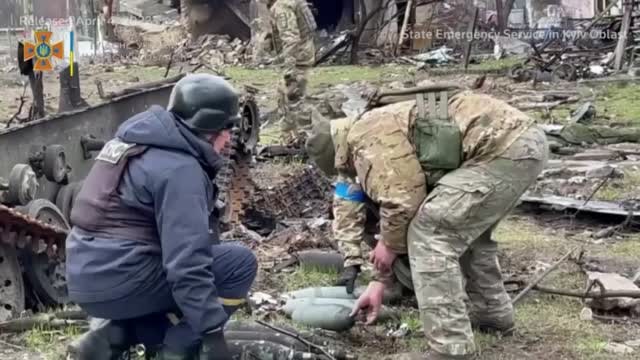 A man has revealed how he survived a shooting in the Ukrainian town of Bucha by playing dead after being shot.

The town just outside of Kyiv has become the scene for alleged war crimes, leading Boris Johnson to release a video message in Russian saying: “They are a stain on the honour of Russia itself.”

Russia has refuted claims of mass killings since the town was freed from their control on 31 March, with Russian foreign minister Sergei Lavrov claiming footage and images of bodies in the streets were “staged” and Ukrainians had used “fake dead bodies”.

However, satellite imagery of the area in the days before Bucha was freed shows at least nine bodies lying in the street for weeks, contradicting Russian claims.

Survivors are now telling their stories of life under Russian control, as they come to terms with what they saw.

One man, Vanya Skyba, was among eight men who came under Russian fire at a checkpoint on 5 March, before trying to take shelter in a nearby basement.

He told the Economist when they were found later that evening, they were asked if they were soldiers or had ever fought in Donbas.

“We said no, we were builders,” Skyba said.

“But they moved us to a base on Yablonska street 144. They made us take our clothes off, lie face down, and then they searched our telephones and bodies for symbols and tattoos.”

He said that to make an example and make the other men talk, one of the men was killed.

The brutal move worked, and one of the men admitted he was a part of Ukraine’s territorial defence.

For hours, Skyba said he and the rest of the men were beaten and tortured in an ordeal that only ended when an order was given to kill them.

Skyba told the Economist he had only survived the shooting because he played dead after the bullet went through his side.

The accents and appearance of the Russian soldiers led to Skyba assuming they were from Buryatia, in eastern Siberia.

The order to kill was given by a man who had a standard Russian accent, Skyba said.

He added: “The Buryatis asked what they should do with us. The Russian answered that they should ‘yebashit’ us [‘f***ing do them in’]—but to do it away from the base.”

Skyba said the remaining men were taken the side of the building and shot, but he only survived after the bullet passed through his side.

He fell to the concrete floor and played dead, only fleeing to a nearby home when he could hear the soldiers were gone.

Another unit of Russian soldiers found him later, but believed his cover story that he owned the home and led him to a bomb shelter in the cellar of the same building where he had been shot.

Skyba stayed there for a few days with women and children before he was able to flee to Kyiv when humanitarian corridors opened.

Ukrainian foreign minister Dmytro Kuleba said on Monday the evidence of civilian killings from the town of Bucha are just the “tip of the iceberg” and show the need for tougher sanctions on Moscow.

Ukrainian authorities said on Sunday they were investigating possible war crimes by Russia after images from Bucha showed the bodies of civilians lying on the ground and makeshift graves.

“The horrors that we’ve seen in Bucha are just the tip of the iceberg of all the crimes (that) have been committed by the Russian Army,” Kuleba said at a press conference alongside UK foreign secretary Liz Truss.

“Half measures are not enough anymore. I demand most severe sanctions this week, this is the plea of the victims of the rapes and killings. If you have doubts about sanctions go to Bucha first.”