Are parts of India becoming too hot for humans?

Shekhar Chandra is a Ph.D. Candidate in Public Policy, at the Massachusetts Institute of Technology. 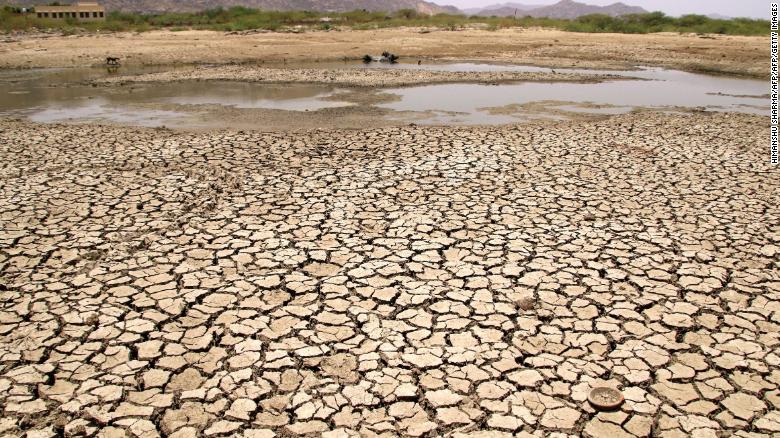 (CNN)Intense heat waves have killed more than 100 people in India this summer and are predicted to worsen in coming years, creating apossiblehumanitarian crisis as large parts of the country potentially become too hot to be inhabitable.

Heat waves in India usually take place between March and July and abate once the monsoon rains arrive. But in recent years these hot spells have become more intense, more frequent and longer.

India is among the countries expected to be worst affected by the impacts of climate crisis, according to the Intergovernmental Panel on Climate Change (IPCC).
Experts at MIT say that even if the world succeeds in cutting carbon emissions, limiting the predicted rise in average global temperatures, parts of India will become so hot they will test the limits of human survivability.
“The future of heat waves is looking worse even with significant mitigation of climate change, and much worse without mitigation,” said Elfatih Eltahir, a professor of hydrology and climate at MIT. 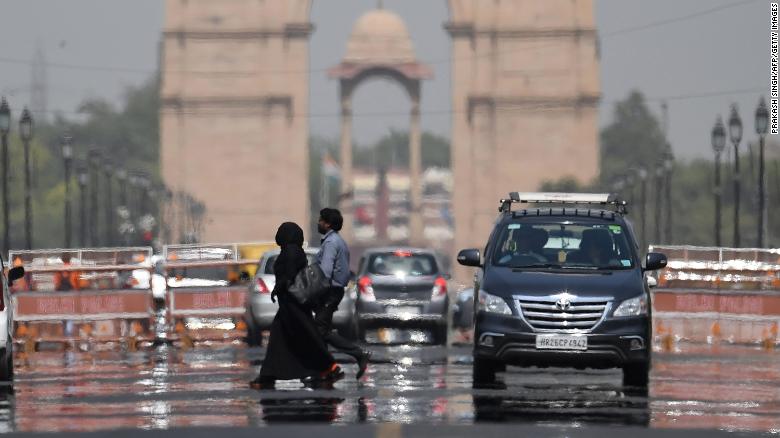 When the heat rises

The Indian government declares a heat wave when temperatures reach at least 4.5 degrees Celsius (8.1 Fahrenheit) above the “normal” temperature for that area for at least two days. A heat wave becomes “severe” when temperatures climb to 6.4 degrees Celsius (11.5 Fahrenheit) above normal for at least two days.
Thresholds for heat waves, therefore, differ across the country — in the capital New Delhi, a heat wave is declared after two consecutive days of temperatures of at least 45 degrees Celsius (113 Fahrenheit).
Last year, there were 484 official heat waves across India, up from 21 in 2010. During that period, more than 5,000 people died.This year’s figures show little respite.
In June, Delhi hit temperatures of 48 degrees Celsius (118 Fahrenheit), the highest ever recorded in that month. West of the capital, Churu in Rajasthan nearly broke the country’s heat record with a high of 50.6 Celsius (123 Fahrenheit).
India’s poorest state, Bihar, closed all schools, colleges and coaching centers for five days after severe heat killed more than 100 people. The closures were accompanied by warnings to stay indoors during the hottest part of the day, an unrealistic order for millions of people who needed to work outdoors to earn money.
And forecasters believe it’s only going to get worse.
“In a nutshell, future heatwaves are likely to engulf in the whole of India,” said AK Sahai and Sushmita Joseph, of the Indian Institute of Tropical Meteorology, in Pune in an email. 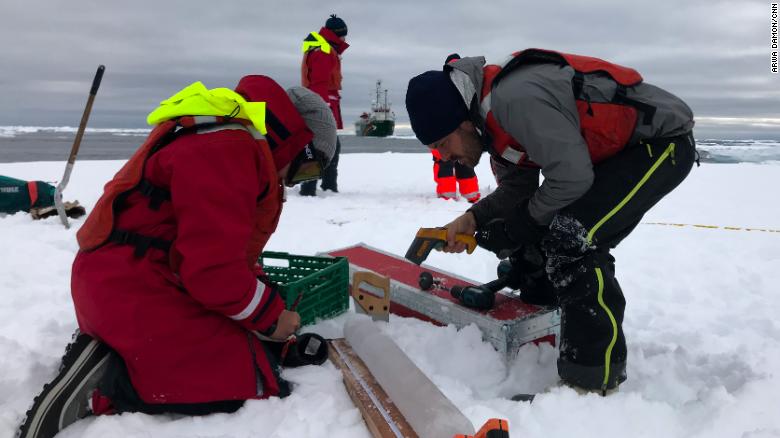 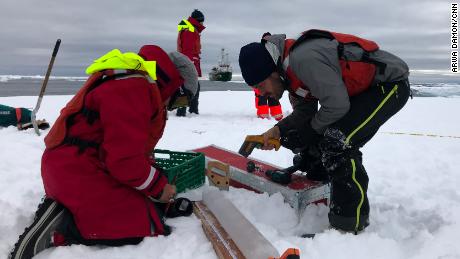 Arctic ice faces trouble from above and below .

India’s situation is not unique. Many places around the world have endured heat waves so far this year, including parts of Spain, China, Nepal and Zimbabwe.
To examine the question of future survivability of heat waves in South Asia, MIT researchers looked at two scenarios presented by the IPCC: The first is that global average surface temperatures will rise by 4.5 degrees Celsius by the end of the century. The second is the more optimistic prediction of an average increase of 2.25 degrees Celsius. Both exceed the Paris Agreement target to keep the global average temperature rise by 2100 to below 2 degrees Celsius.
Under the more optimistic prediction, researchers found that no parts of South Asia would exceed the limits of survivability by the year 2100.
However, it was a different story under the hotter scenario, which assumes global emissions continue on their current path. 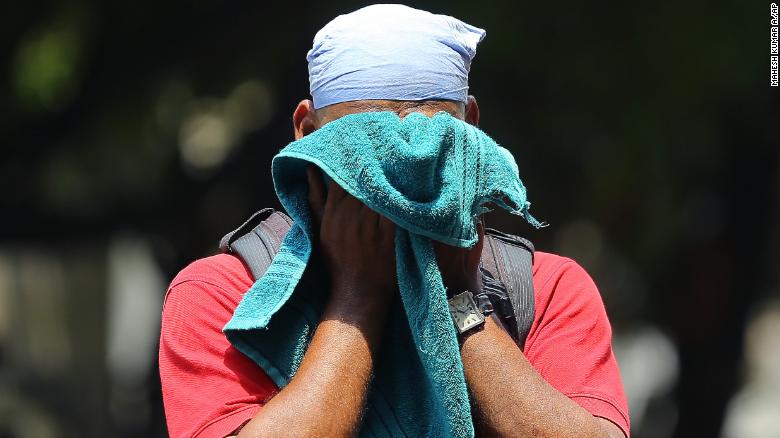 An Indian man uses a towel to wipe the sweat on his face on a hot and humid summer day in Hyderabad, India, on June 3, 2019.

In that case, researchers found that the limits of survivability would be exceeded in a few locations in India’s Chota Nagpur Plateau, in the northeast of the country, and Bangladesh.
And they would come close to being exceeded in most of South Asia, including the fertile Ganges River valley, India’s northeast and eastern coast, northern Sri Lanka, and the Indus Valley of Pakistan.
Survivability was based on what is called “wet bulb temperature” — a combined metric of humidity and the outside temperature.
When the wet bulb reaches 35°C it becomes impossible for humans to cool their bodies through sweating, hence it indicates the survival temperature for humans. A few hours of exposure to these wet bulb conditions leads to death, even for the fittest of humans.
The places in India where it could become more difficult to survive overlap with already highly vulnerable areas, said Eun Soon, assistant professor at Hong Kong University of Science and Technology, who also took part in the MIT study.
That is, places with dense populations and poor economies that rely heavily on fishing and agriculture. They include cities like Patna and Lucknow in northeastern India, home to more than 4 million people combined.
“If we continue to produce the greenhouse gases at the current pace, one of the most populous regions in the world will not avoid the high risk of the deadly heat wave, facing an upper limit on human heat tolerance,” she said.

What is the government doing about it?

India is still in the initial stages of developing a robust nationwide Heat Action Plan.
The Indian Meteorological Department (IMD) is working with state health departments to create an early warning system that would notify millions of people by text message about ways to stay cool, when heat waves hit.
The city of Ahmedabad, in Gujarat, introduced the country’s first action plan in 2013, and its text messages, extra drinking stations and advice to keep out of the sun are credited with saving more than 2,000 lives. At the same time, India is seeking long-term solutions.
See how Europe is dealing with an extreme heatwave 01:34
A signatory to the 2015 Paris Climate Agreement, the country has pledged to cuts its carbon emissions by 33% to 35% below 2005 levels by 2030.
Last month, Prime Minister Narendra Modi’s administration announced plans to add 500 gigawatts of renewable energy to the country’s power grid by 2030. By that year, renewable energy should account for at least 40% of India’s installed power capacity. The country is also planting forests to help mop up carbon emissions.
Climate Action Tracker, a site that analyzes countries’ progress, says India is making good headway but could do more by reducing its reliance on coal power stations.
A report by India’s Central Electricity Authority released this week found that coal power could still account for half of India’s power generation in 2030, despite the country’s investments in solar power.
Given the more frequent heat waves and dire future predictions, capping a rise in global temperatures could very well turn out to be India’s most important challenge in decades ahead.
The survivability of more than a billion people is at stake.

Correction: This story has been updated to reflect the correct temperature in Fahrenheit.