OK Facebook friends, time to block my news-feed. Or unfriend me.

If you’ve ever posted anything remotely racist or misogynistic or promoted gun violence or made fun of political correctness or promulgated lies about President Obama or former Secretary of State Clinton, then I blocked your news feed long ago.

I am one of those “elite liberals” that you got back at when you voted for Donald Trump.

And have a working knowledge of world geography and foreign policy.

I think that the person who runs the most powerful country on the planet should take that job very fucking seriously.

I think that “supporting our military” should mean that we do not send our brave young men and women to needless and endless wars.  Do you realize that we’ve been in Afghanistan for 16 years now?  And for what?

I think that our country has an imperialistic foreign policy and that often times we reap what we sow.  I think that the architects of the Iraq War (Bush, Cheney, Rumsfeld, Rice) committed war crimes and have the blood of all of our slain and maimed soldiers and innocent civilians on their hands.

I think that Guantanamo Bay is a bloody stain on our national character.

That “People kill people, guns don’t kill people” line is most back-ass-ward bullshit that I’ve ever heard.  People with guns kill people.   And not everyone should have a gun. And certainly not an arsenal.  And no I am not naïve enough to think that restrictions on gun access will prevent all violent gun deaths.   But for fuck’s sake, can we start somewhere?

I think that words matter.  Perhaps you were happier in a world where kids were called “retards” and some boys were called “faggots,” but I would rather live in a civilized and polite world.

Maybe you will blast “Merry Christmas” as loud as you can, but I will keep saying “Happy Holidays,” because that is more inclusive.  As in not purposefully leaving anyone out.  As in being kind.  As in just fucking acknowledging that your reality is not everyone’s reality.  And that by acknowledging someone else’s reality, that yours is not in jeopardy.  What are you all afraid of anyway?  Is a mass of Muslim immigrants going to take your Christmas away?

I’m more afraid of the mass of Christians that are trying to teach kids in Texas that creationism is real.

I think that those of you who put “Blue Lives Matter” signs on your lawn ought to be ashamed of yourselves for thinking for one minute that there is no racism in this country and that young black men being gunned down in the street by police is not a problem.

And for those of you who were worried that life as we knew it was coming to an end when Bernie Sanders suggested universal health care and free college education, look to yourselves first.  Guess what?  Those state universities that you send your kids to?  They are subsidized by taxpayers.  Why do you think they are so much cheaper that private colleges?  That is SOCIALISM!

Are your parents on Medicare?  SOCIALISM!

Do your police officers, firefighters, prison guards have benefits and a pension? SOCIALISM!

Why is it that when it benefits you, it’s not socialism?

I think that everyone, from birth to death, should have access to basic health care.That means I believe in a single payer system.  I think that the wealthiest country in the history of the world can afford this.

The Affordable Care Act, the compromise between leaving 20 million people with no care and a single payer plan, is flawed,  but it is morally bereft to overturn it.  Those members of the House who voted to repeal it so many times should have been spending that time coming up with a better system.

And do any of you understand corporate welfare?  Here’s an example: You shop at Wal-Mart because it’s cheap. Wal-Mart is the biggest employer in the country.  It does not pay its employees enough for them to live on.  So some of them go on welfare.  And many of them have to use the Affordable Care Act to get health insurance.   Who funds welfare?  Taxpayers.  Who funds the ACA?  Taxpayers.

So Wal-Mart makes a huge profit but doesn’t pay its employees a living wage so taxpayers pay to support them.  Still want to buy your goods at Wal-Mart?

And yes, there should be a minimum wage that is livable.   How could you be against that?

So yes, I’m an elite liberal.  I buy organic foods when I can because I know that pesticides are harmful to the earth and I care about preserving the planet for the next generation.  I think that clean water and clean air is worth preserving and that there have to be strong laws to protect them. I recycle.  I reuse plastic bags because the thought of all of the plastic trash I’ve personally created in my 55 years on earth makes me sick. I try to use polite and inclusive language because I care about others.  I don’t believe in war.  I believe we should do everything we can to prevent violence.  I believe that health care is a basic human right.  And that women’s rights are human rights.

I even listen to NPR.

I thought George Bush was a really horrible president.

But, you really got me this time.

You elected Trump.  Look up the DSM-IV criteria for Narcissistic Personality Disorder and you will find that he meets all the criteria. Look up the criteria for ADD as well and you have your man. He does not read about issues because he lacks the attention span.   He speaks at a third grade level.

He brags about his crimes against women.   He founded the fake Trump University. He has innumerable conflicts of interest.  He is so overwhelmed he has to have his kids help him.

His education secretary nominee doesn’t believe in public education.  The EPA nominee has sued the EPA before.  His VP believes that gays should have conversion therapy.  The Labor Secretary nominee is anti-labor. The nominee for Ambassador to Israel has views which are guaranteed to inflame the situation in the Middle East.  And who knows who he’ll nominate to the Supreme Court. He is the President Elect of the FUCKING UNITED STATES OF AMERICA but he is watching Saturday Night Live and tweeting about it.

HE DOESN’T KNOW ANYTHING.

In what way could the pussy-grabbing President elect with untreated ADD and a personality disorder who tells more lies than any politician in modern history possibly make this country better?  Yes, hatred and stupidity reign, thanks to you.

Good job.  You showed me this time. 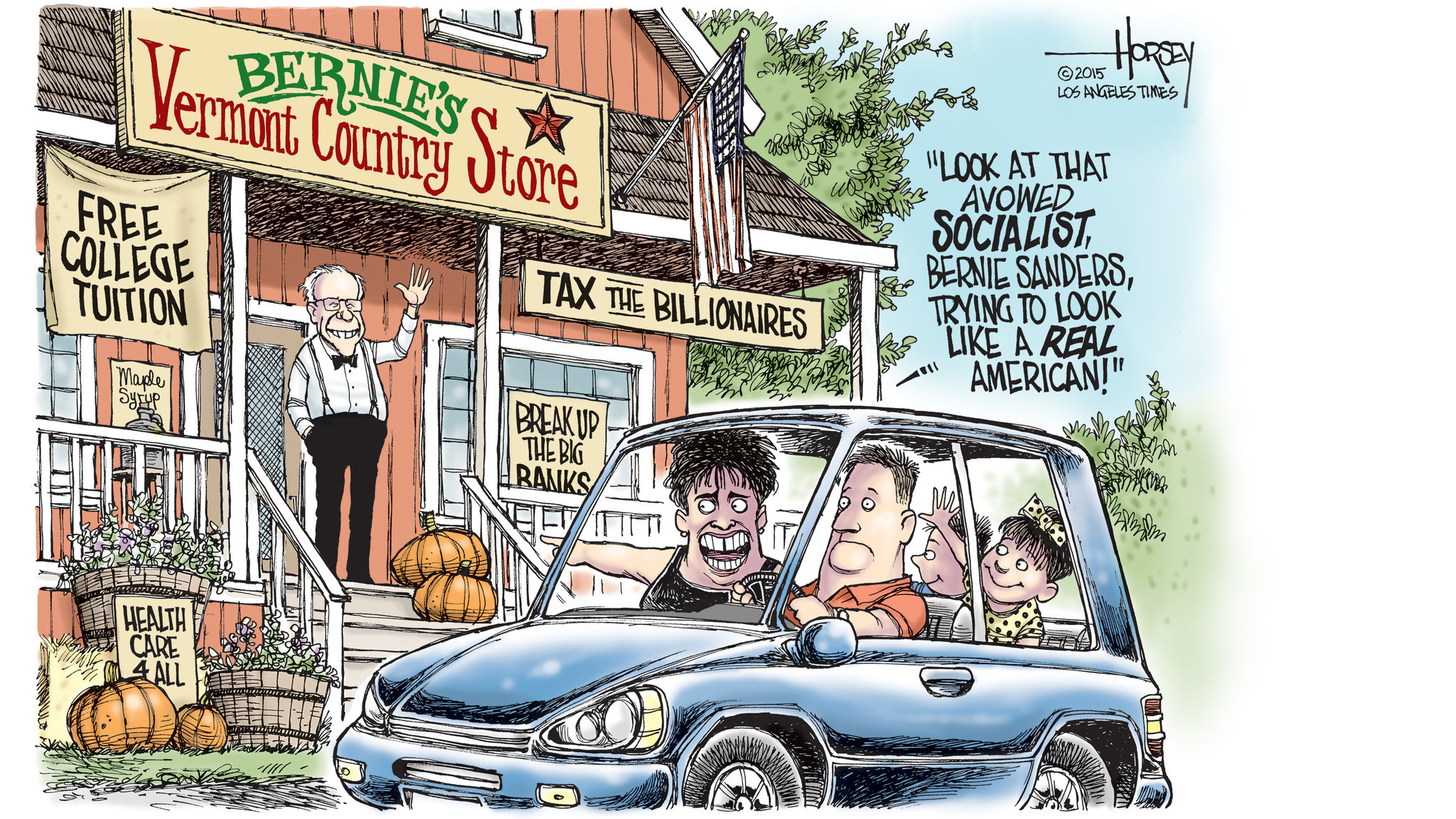 America’s Military: One of The Largest Socialist Organizations in The World

Couldn’t have said it any better Mommadoc. The only small thing I would add, is that our military, yes that same military that Trump repeatedly trashed during the campaign and also refused to support by not paying federal taxes for decades, is one of the largest and most respected socialist organizations in the world. I spent 3 years in the Army serving my country. After we got up in the morning and attended reveille, we went to the mess hall to eat a free home cooked breakfast. You then assembled for work, unless you were sick or had a toothache, and instead went to a fully paid sick call clinic or dentist. You ate as much home cooked food as you wanted for lunch at the same mess hall. After work you ate another home cooked meal for dinner and took some back to the barracks for a snack. If you needed something at the PX, you paid subsidized prices for everything. If you needed your clothes laundered or cleaned, you put them in your laundry bag, and someone from the quartermaster service battery picked them up. A few days later you picked them up all cleaned, washed, starched and pressed. If you wanted entertainment, you went to the EM or NCO club and listened to free live musical groups and drank subsidized alcoholic beverages or went to the subsidized movie theater. You then went to sleep in a nice clean bed paid for by the generous American taxpayers. You then started all over the next day. If you were an NCO like myself and you had a automobile, you enjoyed subsidized auto insurance. You also had paid life insurance and 30 days of paid vacation a year. You could go to school during service, if you had time, or you could wait until you got out to enjoy fully paid college education at a state university. Some military personal also get a stipend while they’re attending school. You don’t make a lot of money compared to civilian life but that’s the contract you make to serve your country. And you’re on call 24/7 if necessary. But you also have paid medical care for life if your income is low enough. You serve your country and your country serves you in return. Our Federal government contracts with medical providers, drug companies and other companies for reduced costs for military personal, their families and the Veterans Administration. Socialism at it’s best. Something these Republi-cons just can’t understand; the American government and it’s citizens working together for a common goal.       John Hanno, www.tarbabys.com