ABC News chief Washington correspondent Jonathan Karl appeared Thursday on Deadline: White House, where he joined the growing chorus of people claiming Fox News opinion host Tucker Carlson is parroting Russian propaganda. Carlson has been accused of doing so multiple times in the past, this time coming the day after Carlson pushed the false Russian narrative that the U.S. military has secret bioweapons labs in Ukraine. Carlson opened his show Wednesday night propagating that exact message.

“He was giving credence to what the Russians are now saying, a really classic propaganda claim that the United States is manufacturing, or has been manufacturing chemical, biological weapons in Ukraine,” Karl said. “And Tucker Carlson used the segment to echo that claim, saying that he was at first skeptical about it, but now he’s convinced that there’s credence to it.”

Just an hour after Carlson’s segment aired, Fox News national security correspondent Jennifer Griffin appeared on Hannity where she contradicted what Carlson had said about the biolabs, stating the fact that they are neither secret, nor do they produce bioweapons.

On Thursday, Karl posted a tweet highlighting other pieces of Russian propaganda that Carlson has pushed.

“He says as just an aside that the United States encouraged Russia to invade Ukraine,” Karl said. “In what universe is that true? Only if you’re sitting in Moscow and watching Russian television because it’s exactly, again, what Vladimir Putin is saying.”

Karl went on to accuse Carlson of flat-out plagiarizing Putin.

“What is sort of inexplicable here is that what is being said is almost a plagiarism of Vladimir Putin,” Karl said. “It’s almost word for word what Vladimir Putin has been saying, not just now, but again, for several years, and what he has said in making the argument to justify what’s happening in Ukraine.”

And Karl wondered if Russia’s excuse for its deadly bombing of a Ukrainian maternity ward might be the next piece of Russian propaganda that Carlson pushes.

“Today, Russian propaganda is saying that that maternity ward that was bombed was somehow a military facility,” Karl said. “I mean, is that gonna be echoed next? It is inexplicable. I can’t explain it.” 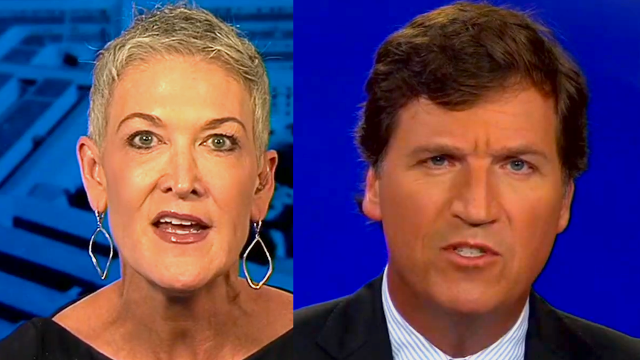