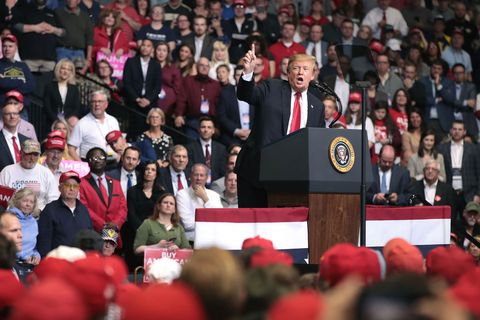 It is fitting we mark April Fools’ Day, a day on which people say something is true but it’s not actually true and that constitutes comedy, with an update on the president’s propensity for saying things that are not true. The only thing more flabbergasting than the sheer volume of false claims made by Donald Trump, American president, is the inability of some in The Liberal Media to take that extensive record into account when covering the world’s most powerful man. There is no reason to believe the president, or anyone who works for him, when they say something. This is nothing to celebrate—it’s bad for the country and bad for the world. But it’s a fact.

In case you were holding out hope that the president’s word was still worth a damn, you might consider the findings from the Washington Post this fine Monday. They’ve been tracking the false claims this president made from day one of his presidency, and in short, he’s been continually upping the stakes. It took Trump 601 days to reach 5,000 false claims in public—a prodigious rate. In 2018, he was throwing out 15 a day. But over the last 200 days in particular, he’s outdone himself.

Now, on his 801st day, the count stands at 9,451, according to The Fact Checker’s database that analyzes, categorizes and tracks every suspect statement the president utters. That’s a pace of 22 fishy claims a day over the past 200 days, a steep climb from the average of nearly 5.9 false or misleading claims a day in Trump’s first year in office.

Dave Chappelle has the lowdown here. Trump marked the occasion by lying about the Census, suggesting it’s “meaningless” without a citizenship question, which it has not had for nearly 70 years. He also described asylum—the principle under international law that people fleeing violence and persecution can seek refuge in another country—as a “loophole.”

Trump and first lady Melania Trump walk off Marine One on the South Lawn of the White House on March 31, 2019. TASOS KATOPODIS/Getty Images

But the real weapons of mass deception will be deployed as part of Trump’s resuscitated push to repeal Obamacare. You may recall Republicans tried this when they essentially controlled every branch of government in 2017, only to fail spectacularly. But Trump’s Justice Department opted last week gave up fighting a lawsuit lodged by various Republican secretaries of state, raising the possibility the law could be struck down by the kind of unelected judges about which Republicans occasionally used to complain. This raises the specter that the Trump administration—and the Republican Party more generally—will be complicit in throwing millions of Americans off their healthcare coverage heading into a presidential election year.

As the Post report on Trump’s truthiness illustrated, this will occasion a festival of deception from this president, like the dross he trotted out at his Totally Normal Rally in Grand Rapids, Michigan at the end of last week.

Remember this because it’s very important, and I’m speaking now for the Republican Party: We will always protect patients with preexisting conditions, always.

This goes well with Trump’s batty claim last week that “the Republican Party will become the Party of Healthcare!”

The various abominable healthcare “reform” bills Republicans cooked up in 2017 culminated with the Graham-Cassidy version, which offered states the chance to apply for “waivers” that granted them exemption from Obamacare’s “essential benefits” mandate. That guaranteed insurers had to cover 10 core services, like emergency room visits or prescription drugs or maternity care, but the Republican plan—which they tried to force through the Senate before it could be fully assessed by the Congressional Budget Office—could have waived these for insurance companies in states that applied.

Considering how many red states refused free money from the federal government to expand Medicaid (the Graham-Cassidy bill also rolled back that expansion), it’s safe to say many states would have sought waivers, which could have, according to Politico, jeopardized protections for “pre-existing conditions and undermine[d] prohibitions on annual and lifetime limits for insurance coverage.” As a fun little thing, Trump has tapped Bill Cassidy—the Cassidy in Graham-Cassidy—to develop the new Party of Healthcare’s plan. He’s joined by Rick Scott, who’s got his own stellar record on the issue.

You can safely assume that what you are hearing is a crock of shit, because the president says 22 false things per day in public now. Again, this makes it all the more gobsmacking that when Trump’s hand-picked attorney general wrote a summary of Robert Mueller’s report, members of The Liberal Media treated it as God’s own gospel. William Barr wrote a 19 page memo attacking the Mueller probe before he got the job, and now he’s saying his first letter was never meant to be a comprehensive summary of the Mueller Report’s findings. Yet The Barr Letter wasn’t just taken at face value—it was repeatedly referred to as The Mueller Report itself in press coverage.

Folks: It’s been years now. Lucy is not actually presenting the football for you to kick it.