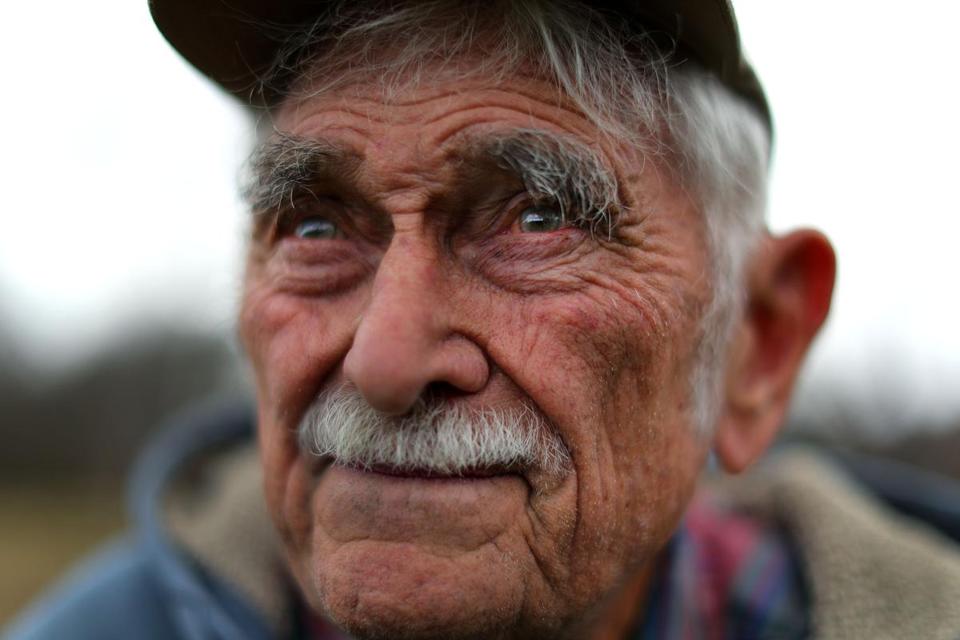 Joseph Gerry has spent most of his 92 years working on his family’s farm.  John Tlumacki/Globe Staff

BROCKTON — Joseph George Gerry has been picking rocks off Gerry’s Farm since he was a boy. Beyond the fields, you can see rock walls of the sort that landowners have been building in this region for centuries.

Gerry, 92, “The Chief,” as his family calls him, is the second generation to farm this land. He inherited it from his father, an immigrant from Poland. Gerry (pronounced with hard “G”) works every day; retirement of any sort isn’t something he ever considers. He has a good example: His father farmed until he was almost 90. Gerry’s wife, Dolores “Dolly” Gerry, 88, “Babci” to her grandchildren, stays close to the farmhouse, where she is surrounded by her favorite Polish pottery, religious images, and photos of her family and Polish Pope John Paul II.

Twenty years ago, I spent the growing season at Gerry’s Farm, visiting several times a week from the moment in May when the first plants went into the soil — timed to the cycles of the moon — until the stand was piled with pumpkins and then closed for the year. I stopped by recently to see how the Gerrys are faring and how the season went.

The couple sit at the kitchen table in their 1740 farmhouse kidding each other. When I ask something that Dolly Gerry thinks her husband shouldn’t answer, she chides him in Polish, calling him Jozef. (In Poland, the family surname was Giero.) It’s not hard to tell what she’s up to. She’s cautious and he’s an open book and they’re both very cheerful. Dolly Pazyra was a nurse before she married Joseph 67 years ago. They met at a dance at the Polish club in Chelsea. She could dance well and she could speak Polish, and he knew she was for him. “When we were young,” Dolly Gerry told me years ago, “you had to marry your own.” They moved into the farmhouse with his parents and, after the children were born, she never returned to nursing. 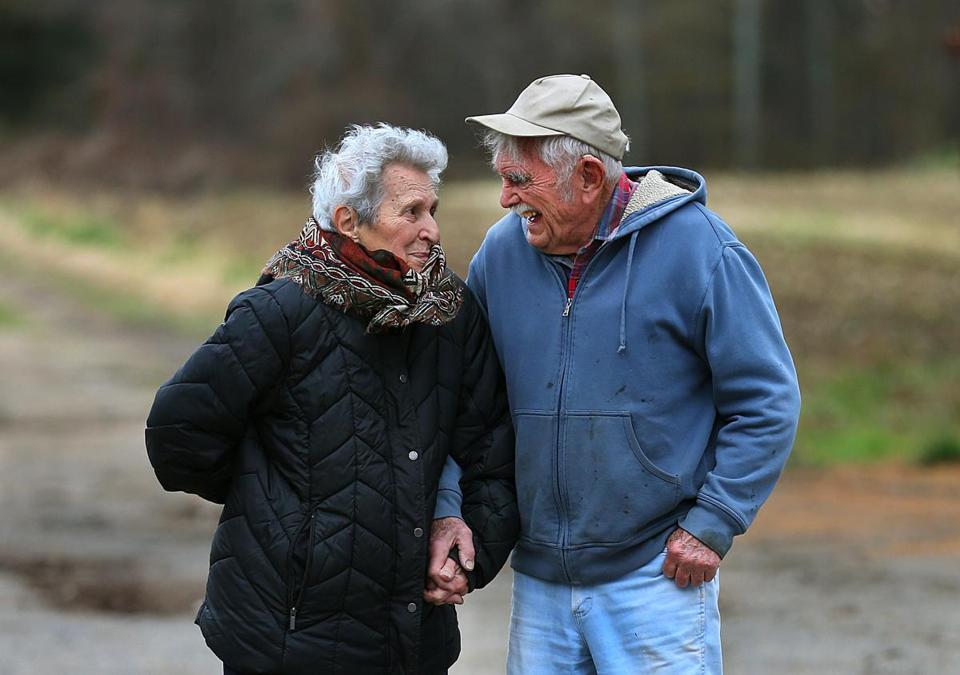 They had five children in nine years and her family took the train from Chelsea to help, cooking and cleaning and saving her sanity. At the time, he farmed and worked nights at the local egg auction and often slept only an hour or two before heading back to the fields. Other years he drove a truck all night and off season. 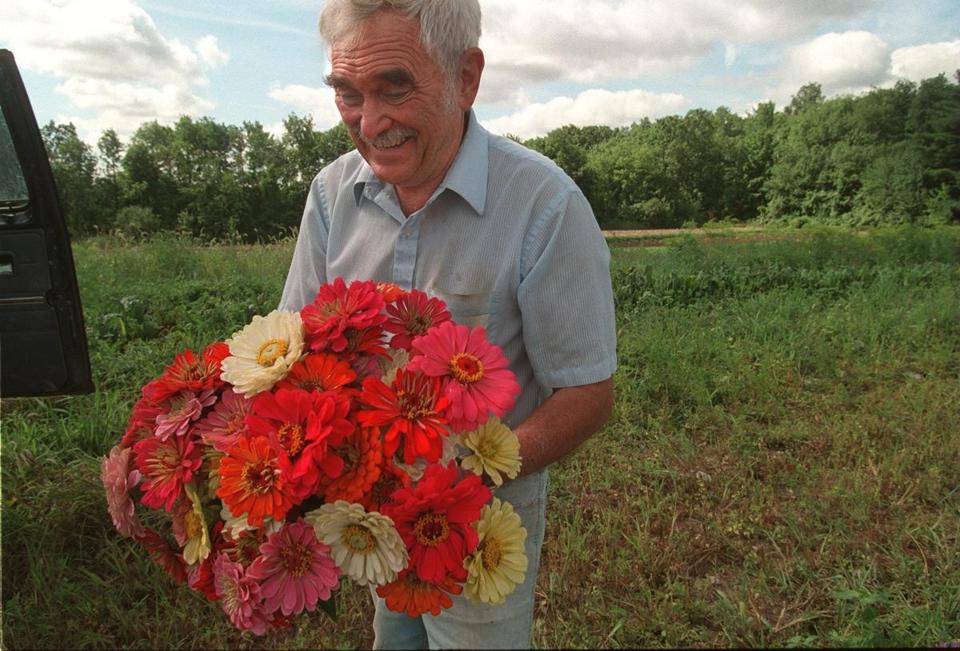 While the city of Brockton transformed around them, three generations of the Gerry family stood firm, sowing seeds, reaping vegetables, and serving their loyal customers.

Joseph Gerry could be in an ad for farm life. Years in the outdoors have weathered his skin and he doesn’t seem to feel the cold. In the fields on a day when the wind is wrapping itself around us, he wears a flannel shirt, jeans, a zipper sweat shirt, and shoes that open in the front when he walks because the soles have pulled away from the tops. He’s got a new pair but he loves these because they were made in Brockton at one of the few shoe factories left in this once-thriving manufacturing city. During the season, he’s in the greenhouses by 4:30 a.m., where he’s surrounded by flowers.

At one time, Gerry’s Farm only grew raspberries. Now they have other berries, a full array of vegetables, and honey from their own hives. The bees’ work of pollination is essential to agriculture. “If you don’t have bees, you might as well close the door,” he says. Raspberries thrive in the rocky soil. At one time, cows and chickens provided manure. In the 1950s, after an especially dry summer, and after the city stopped allowing Gerry to pull water off city hydrants, he took a bifurcated branch from an apple tree to use as a divining rod and found a pond on his own land, then a second one. “Mother Nature doesn’t want you to be too happy or jump too high,” he told me decades ago. “She’ll give you a little bit this time, then she’ll take it back.” 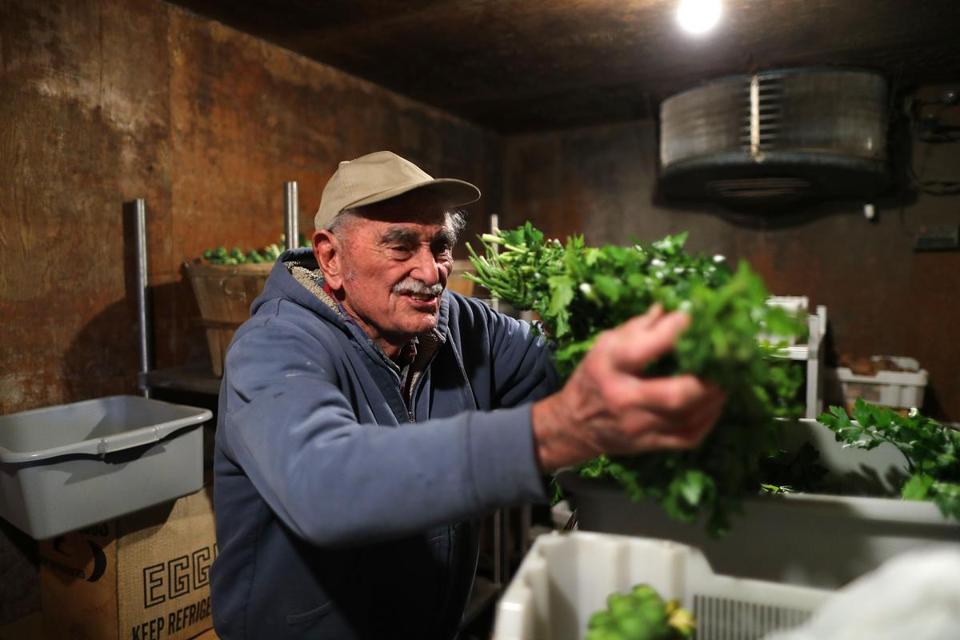 Farming comes with exhaustion, worries about droughts, wet seasons, frost, hail, equipment, and more. This season it was wild animals in the fields. Gerry doesn’t mind coyotes because they eat the woodchucks. “Terrible year with turkeys and deer,” he says. He attributes this to Brockton’s leash law. When residents used to let their dogs out without leashes, “they would drive the deer into the woods.”

It’s a difficult life without much remuneration, particularly when the profits from 55 acres are going to several families. In this case it’s the Gerrys, sons Carl and Christopher, and Carl’s son, Greg. Carl does the planting and plowing and Greg works beside his dad. “I think he’s going to take over,” says his grandfather. Christopher oversees the greenhouses and farmstand and runs a Christmas stand after the growing season. Daughter Julie Ann Clark, a nurse, also helps at the stand. There are seven grandchildren and nine great-grandchildren. Son Andrew is a rancher in Arizona and another son, Joseph, a retired engineer in North Carolina, comes back in the summer to farm.

Christopher lives upstairs in the farmhouse. “Nobody checks on us,” says Dolly Gerry. “It’s constant here. The great-grandchildren are here every day.”

Joseph Gerry had disk surgery when he was younger and it was so serious he was told he had a 50-50 chance of paralysis. “I was back working two weeks later,” he says. He’s also got two new knees. “I can’t stand up straight. When I walk I lean.” Otherwise he’s in good health.

Gerry’s land has been attractive to developers for years. Route 24, built in the 1950s, connected Brockton to Boston. Once when someone offered the family a staggering amount for the farm, he sat down with his sons to tell them what was on the table. They all wanted to continue farming. During the recent recession, the Gerrys sold some acres “to someone who built houses,” says Joseph Gerry. He will not use the word “developer.” It had been a bad year. “At the time it was desperation,” he says. 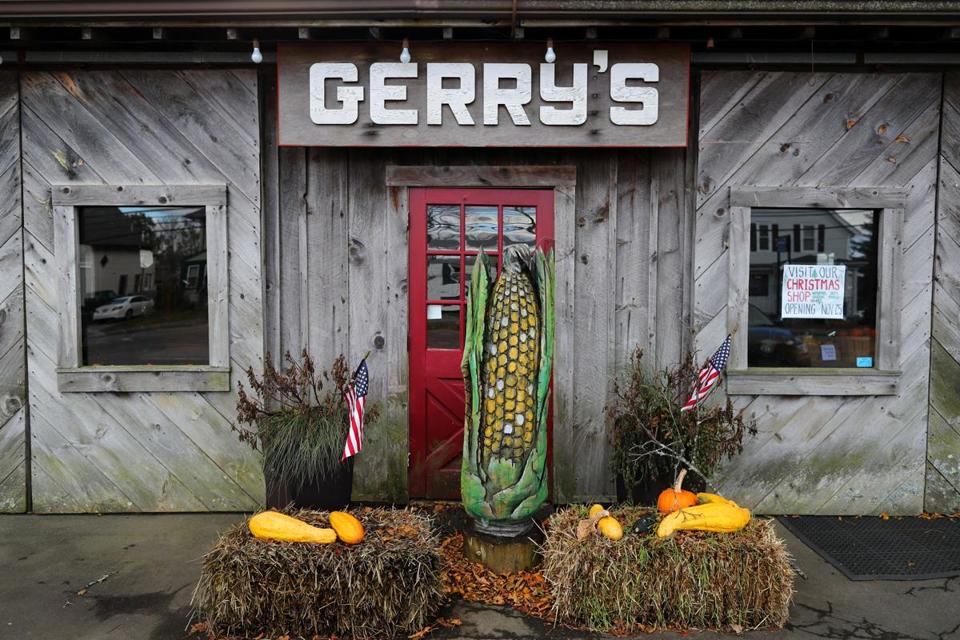 Operating the farmstand is a family affair.  John Tlumacki/Globe Staff

West Acres Nursing Home, which overlooks the fields, was built next door to the Gerrys on land Joseph sold to the business 45 years ago when he had a huge tax bill and nothing to pay it with. That was before farmland tax rates were lowered by the state Legislature. If they hadn’t, he told me, “no one would have survived.”

Joseph Gerry’s boyhood friend Al Wilbur died three years ago. Dolly Gerry affectionately called Wilbur her husband’s “first wife.” They went fishing and hunting every fall in rural Quebec for 75 years, in a spot so remote they had to be flown in by helicopter. Inside a big shed on the farm, where tractors are stored for the winter, a large canoe straddles the top of the cabinets, the one he and Wilbur used on their adventures. Gerry stopped when Wilbur died, but Dolly Gerry fulfilled a lifelong dream six years ago and went to Poland with her daughter and two grandchildren. She found the home where her father was born.

Recently, Joseph Gerry sold a little more land to the neighboring nursing home so it could expand. “They sit out and watch me,” he says of the residents. “Some of them are 50. I never want to go there.”

Looking skyward, he says, “The guy upstairs, he’s damn good to me.”

Sheryl Julian can be reached at sheryl.julian@globe.com.