This weekend, the New York Times revealed that, in August 2016, Donald Trump Jr. met in Trump Tower with representatives of Saudi Arabia and the United Arab Emirates, who offered campaign help. It is impossible to tell at this point just what this story means, or how it fits into the larger scandal.

One immediate takeaway is that it indicates Erik Prince, the former Blackwater head, Republican donor, and brother of Education Secretary Betsy DeVos, appears to have committed perjury. Prince arranged and attended the meeting, and reportedly said, “We are working hard for your father.” But as Ryan Goodman noticed, Prince has testified that he had had no other contact with the Trump campaign:

1. Meeting was arranged and attended by Erik Prince.

2. Compare this to what Prince told Congress and looks a lot like perjury. 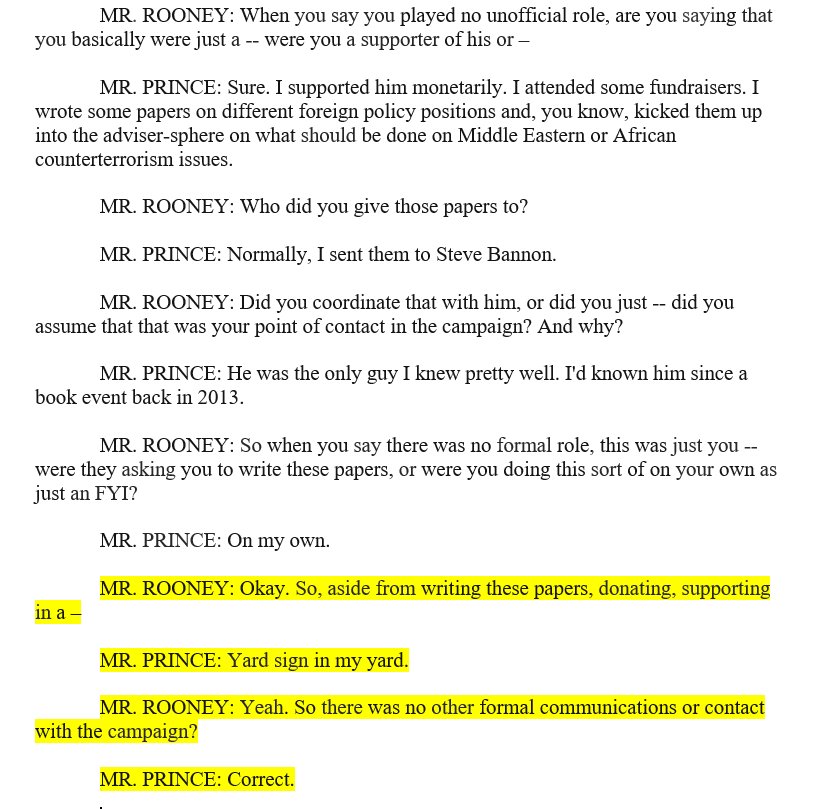 1. Meeting was arranged and attended by Erik Prince.

2. Compare this to what Prince told Congress and looks a lot like perjury.

Ryan Goodman: Prior tweet was Prince testimony about his contacts with Trump campaign in answer to questions by @TomRooney.

Here’s Prince’s testimony about contact with Don Jr in answer to questions by @RepSwalwell:

The Times story contradicts those assertions. The fact that Prince misled Congress about his dealings with these figures implies he had something to hide.

Second, the story provides still more evidence that Donald Trump Jr. was willing to solicit illegal foreign election assistance. The Times does not reveal what came of the August meeting, but at this point, it is safe to say Trump Jr. did not huffily inform his guests that U.S. election law prevents them from meddling and wish them good day.

A “source close to Trump Jr.” floats his defense to Mike Allen. Don is “the king of people wanting to leave a meeting happy, whether or not he intends to follow up,” and “He just trusts people way too much.” Apparently Trump Jr. will happily nod along with any criminal scheme presented to him simply to avoid social awkwardness. He just likes making people happy! Is that a crime?

The broader importance of the revelation remains unclear. The figures in the story have emerged in recent months and inhabit an unmapped but potentially vast new territory in the investigation. Prince, George Nader — a lobbyist for various Middle Eastern interests — and the Gulf States have had some role in the financial and political nexus between Trump and Russia. The figures convened in a suspicious meeting in the Seychelles before the inauguration, which Mueller is investigating as an attempt to set up a back channel to Russia.

Just why would this back channel be needed? After all, Trump was about to become president. He presumably did not need to conduct secret negotiations when he was poised to assume control of an entire governmental apparatus to communicate for him. A possible explanation is that the meetings were designed to facilitate a corrupt deal that needed to evade detection by American law enforcement — either payoffs to the Trump Organization, some return to Russia for its help in the campaign, or both. The Gulf States (as the Times reports) developed a strong preference for Trump to win the election and seem to have played a role.

Trump’s response to the story may give us more information about its importance than anything contained within it. Trump tweeted angrily that “the Witch Hunt has given up on Russia and is looking at the rest of the World,” and then again, “The Witch Hunt finds no Collusion with Russia – so now they’re looking at the rest of the World. Oh’ great!” His attorney Rudy Giuliani echoed this absurd defense. “It shows them at the end of the road — are we now going to check Africa and South America?” he told the Times.

If the news about the Gulf States is unrelated, it would hardly exculpate Trump. The discovery of an additional crime obviously does not constitute proof that the original crime did not exist. If the FBI is investigating a suspect for racketeering, and it turns up evidence he engaged in loan-sharking as well, “he’s definitely innocent of racketeering” is not the most likely explanation. The more intuitive account of these facts is that the suspect has a propensity to commit crimes.

The deeper question is how closely related the Gulf story is to the heart of the Russia question. Was it just another one of Donald Jr.’s legal misadventures? Or did Nader, Prince, and the Gulf States play a central role in facilitating a corrupt deal with Russia?

Trump’s furious lashing out, including his reckless escalation of a crisis with the Department of Justice this weekend, provides interesting clues. Trump has no poker face, no chill. The closer the investigators get to incriminating evidence, the more intensely he rages. He resembles a suspect at a crime scene screaming at the police not to go into the attic. And now that attic is looking awfully interesting.