Midterms 2018: Why the battle for the Florida governor’s office between Andrew Gillum and Ron DeSantis matters

Florida finds itself host to one of the most heated and ill-tempered of all the midterm election races.

Tallahassee mayor Andrew Gillum, 39, is running for governor against Ron DeSantis and hopes to become the first African-American to win the office in the Sunshine State.

Here’s our introduction to one of the defining contests of the autumn.

Who are the candidates?​

Mr Gillum is hoping to bring the blue wave to the beaches but is having to fight dirty against ex-congressman Ron DeSantis, 40, in the battle to succeed Rick Scott.

“He’s presided over a crime-ridden city. He’s involved in corruption. He’s not the guy to lead our state,” the Republican Iraq War veteran said of his rival in their first debate.

Mr Gillum has found himself embroiled in a bizarre scandal apparently involving an undercover FBI agent posing as a contractor offering him tickets to the Broadway musical Hamilton as part of a sting operation.

The candidate has laughed off the affair. “In the state of Florida we have many issues. And tickets to Hamilton ain’t one of them.”

For his part, Mr Gillum has worked to paint Mr DeSantis as a Trump “acolyte” while insisting he himself would be happy to work with the president, despite considering him “a bully”.

“This is not Russia. You shouldn’t have to kiss the ring of the president of the United States for the president to see to the goodwill of the third largest state in all of America,” Mr Gillum said at the podium.

As with Stacey Abrams’s battle against Brian Kemp in Georgia, the contest between these two is being read as emblematic of the national situation.

Like Beto O’Rourke in Texas, Mr Gillum has called for President Trump’s impeachment. He enjoys the support of billionaire Tom Steyer and veteran Vermont senator Bernie Sanders, who has campaigned with him.

What are the key issues?

In the wake of the Stoneman Douglas High School shooting in Parkland earlier this year, gun control will be firmly on the minds of the voters, in no small part thanks to the courageous opposition to the NRA displayed by the classmates of the victims on the national stage.

Mr Gillum has backed tighter controls but been criticized for doing so as “dangerous” by Andrew Pollack, grieving father of one of the slain students. 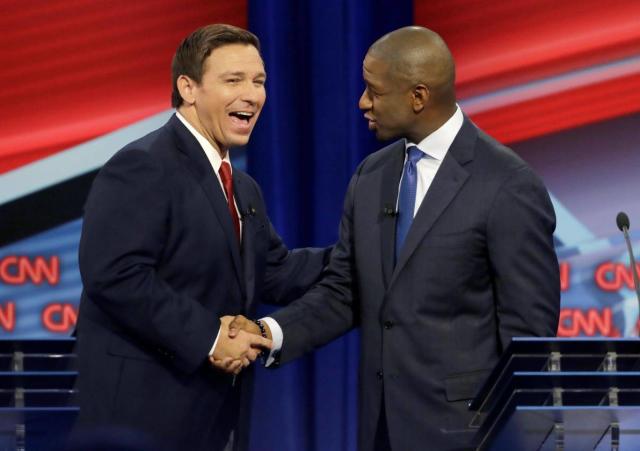 Healthcare and the future of Medicaid will be a major talking point here too, as will climate change – with the Florida panhandle regularly bearing the brunt of tropical storms developing in the Atlantic and Gulf of Mexico, most recently suffering considerable damage as a result of Hurricane Michael making landfall.

Andrew Gillum was strong on the subject in a recent TV debate, cuttingly referring to his opponent as an “election year environmentalist” and declaring: “What Florida voters need to know is that when they elect me governor, they are going to have a governor who believes in science.”

The economy is another key battleground, with Mr DeSantis arguing his opponent would reek devastation of his own by raising corporate tax and the minimum wage, driving investment away.

Mr Gillum, potentially the state’s first African-American governor, has also repeatedly called out Mr DeSantis for making the contest about race, taking particular offence at the latter’s incredibly ill-considered use of the phrase “monkey up”.

“He has only continued in the course of his campaign to draw all the attention he can to the color of my skin. The truth is, I’ve been black all of my life. So far as I know, I will die black,” Mr Gillum joked in Fort Lauderdale.

“I’m not calling Mr DeSantis a racist. I’m simply saying the racists consider him a racist,” he repeated at their next encounter in Davie.

Mr DeSantis has also faced criticism for stoking fear over law and order, suggesting in debate that “undocumented immigrant child molesters” could stalk the streets of sanctuary cities, a claim rubbished by his opponent.