Today’s fossil fuel giants can see that wind and solar power will be eating their lunch tomorrow, but knowing the disruption is coming doesn’t mean they can pivot to meet it.

Big oil companies are starting to consider what the world will look like after the reign of petroleum is over. For example, Royal Dutch Shell recently announced it will invest $1 billion per year in clean energy — a large number, but still a relatively small investment compared to its $25 billion in annual capital spending. Nonetheless, it was a public admission that clean energy is the future, not oil. Rival Total has, arguably, made the biggest investments in renewable energy, buying two-thirds of solar solutions leader SunPower, battery company Saft, and stakes in a number of solar power plant projects.

Chevron and BP have also been in and out of the renewable energy business over the past decade, though both have taken  steps back recently. ExxonMobil is really the only holdout among the hydrocarbon majors, continuing to focus solely on fossil fuels. What the rest of them are trying to do is create a path to a world beyond oil. But these old-school energy industry giants have a long road ahead to reach powerhouse status in renewable energy. 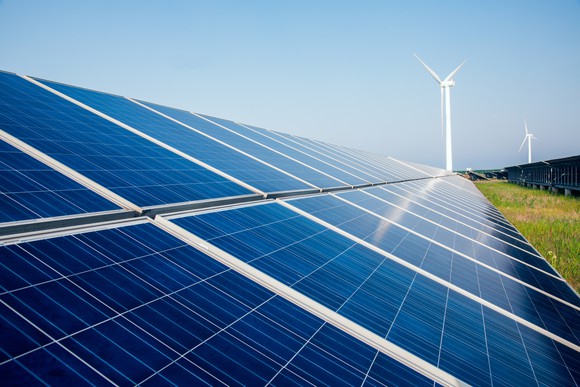 Disruption you can see a mile away

Everyone sees the renewable energy revolution coming. Solar and wind are getting cheap — I mean, really cheap — and systems for storing energy with batteries, compressed air, or hydrogen are getting more affordable by the day. Shell, ExxonMobil, Chevron, and Total can see the threat coming a mile away. The question is what they can do about it.

Disrupting your own business is hard. When a company is running at full steam and generating cash, and has decades of profitable history to look back on, it’s nearly impossible to admit that disruption is coming, even if it’s staring you in the face. Microsoft could have produced a viable device to compete with the iPhone, but it was making so much money from Windows and Office that it didn’t want to reinvent its business, so it missed out on the smartphone revolution. Sears, JC Penney, Walmart, and nearly every other major retailer are losing sales to Amazon.com, despite the fact that even a decade ago, it was easy to forecast that e-commerce was going to skyrocket. One could tell story after story about steady, profitable, incumbents that were unwilling or unable to make strategic shifts to new business models, despite the fact that they were able to see the changes coming to their industries years in advance.

The idea of a company making a firm transition from oil to wind or solar energy seems simple enough. Fellow Fool investor Jason Hall recently asked me if I thought Total would buy out the rest of SunPower soon, as part of its path to the energy business of the future. That decision would seem to make sense for Total, on the surface, but I still view it as unlikely, for now.

It’s difficult to make a wholesale shift to a new business model, and Total is a perfect example of that. Sources have told me that when it bought its majority stake in SunPower, it asked the company for a 10-year plan — something that’s standard in the fossil fuel industry, where businesses chart their investments many years in advance. But SunPower had never crafted such a plan, because if they did, it would be obsolete in a matter of months. The solar industry changes so quickly that companies must constantly adjust on the fly. According to GTM Research, in 2007, the solar industry installed 2.5 GW of generating capacity worldwide. In 2017, China alone installs about that much every two weeks! No one could have predicted that a decade ago, let alone devised a plan then that still made sense in the current environment.

It would be almost impossible for SunPower to be as nimble as it needs to be now under Total’s corporate umbrella. The better strategy for Total would be to keep its major stake, support the company financially if that’s needed, and maybe swoop in to buy the company outright in five or 10 years when the solar industry is mature and the oil business is dying.

Why big renewable buyouts aren’t on the horizon… yet

Just because oil companies don’t have the corporate structure, dexterity, or know-how to run renewable energy companies today doesn’t mean they’ll all go down in flames with the decline of oil. Once the world definitively moves past peak oil consumption and energy companies see darker days ahead, they’ll feel compelled to adjust their strategies. That’s when their acquisitions of solar manufacturers and developers will likely begin in earnest. But buying into the still-evolving industry that renewable energy is today is too risky, even for big oil’s balance sheets.

There’s a reason incumbent industries in general have a hard time adapting to upstarts that disrupt their businesses, even if they see the disruption coming. It’s hard to turn away from a profitable model and leap to a new growth opportunity, even if it’s one with a bright future like solar or energy storage. So, while it seems like the big oil companies are starting to take renewable energy seriously, a decade from now, they probably won’t be the big energy players they are today. They’re just not built to thrive in the fast-moving renewable energy industry.