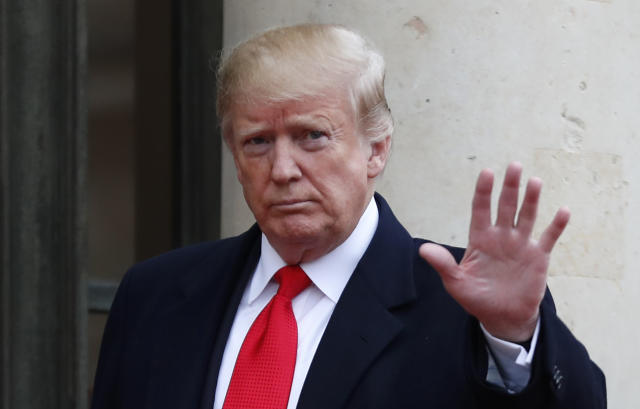 WASHINGTON ― Two days after skipping a visit to an American military cemetery near Paris because it was raining, President Donald Trump called for effectively disenfranchising overseas military members voting in Florida, raising further questions about the draft-evading president’s commitment to the armed services.

“The Florida Election should be called in favor of Rick Scott and Ron DeSantis in that large numbers of new ballots showed up out of nowhere, and many ballots are missing or forged,” Trump tweeted early on Monday, the observed Veterans Day holiday for the federal government. “An honest vote count is no longer possible-ballots massively infected. Must go with Election Night!”

Scott and DeSantis are the GOP’s candidates for U.S. senator and governor in Florida whose election-night margins of victory have resulted in legally mandated recounts.

But skipping those recounts would not only violate state law, it would ignore the ballots of tens of thousands of Florida-based troops deployed overseas. Those ballots are supposed to be counted if they arrive by this coming Friday.

“It’s a nice commentary from the commander-in-chief on Veterans Day,” said Will Fischer, who served in Iraq as a Marine and is now with the VoteVets group.

Less than two-and-a-half hours after Trump’s 7:44 a.m. tweet, the White House announced that Trump would remain there with no public events for the rest of the day.

“He’s not going to Arlington. He’s not even going up to Walter Reed,” Fischer said. “Once again, Donald Trump only sees the military as props. If it doesn’t benefit him, he’s not going to do it.”

Arlington National Cemetery is minutes from the White House across the Potomac River in Virginia. Walter Reed is the Army hospital a short helicopter ride away in Bethesda, Maryland, where service members wounded in combat are treated.

The White House did not respond to repeated queries about the president’s lack of a schedule on Monday. Nor did it respond to questions about Trump’s decision to cancel a visit to the American cemetery in France on Saturday and instead remain indoors tweeting, rather than go to an alternate site closer by.

Military officials in charge of transporting Trump prefer not to fly the Marine One helicopter through rain or fog, and the Secret Service prefers not to use motorcades for long drives when abroad.

In a statement to reporters during Trump’s flight back to Washington on Sunday, White House press secretary Sarah Huckabee Sanders said that a motorcade to the Aisne-Marne cemetery some 55 miles northeast of Paris would have lasted two-and-a-half hours each way and required many hours of road closures that would have been a major inconvenience for local residents.

The two-and-a-half-hour estimate, though, is considerably longer than the estimates from both Google Maps and Mappy, a site popular in France, which came up with one hour and 22 minutes on Monday afternoon. And presidential motorcades generally drive significantly faster than ordinary motorists are allowed to.

“Advance teams, working in close coordination with the Secret Service, typically start building contingency plans weeks – if not months – in advance,” said Ned Price, a spokesman for then-President Barack Obama’s National Security Council who sat through many hours of advance team debriefs in the last administration.

“They do so with precisely this type of scenario in mind, and rain in this part of France would’ve been high on the list of envisioned contingencies,” Price said. “It would seem to strain credulity to believe that President Trump was unable to attend the ceremony. It seems much more likely that he chose not to.”

There are other American cemeteries and monuments closer to Paris, and Trump could have visited one of them instead, even on short notice. Quick unannounced visits are often deemed relatively safe by the Secret Service because potential adversaries have no time to plan for them, either.

Instead, as other European leaders braved the rain Saturday to attend commemorative services at various sites around Paris, Trump remained at the U.S. ambassador’s residence the entire afternoon and into the evening, when he arrived more than an hour late to a state dinner hosted by French President Emmanuel Macron.

Fischer, of VoteVets, is skeptical that the president even made good use of those hours. “I think he sat there in a bathrobe watching Fox News and tweeting ridiculousness,” he said.

During the afternoon, Trump had, in fact, issued tweets, including: “Trying to STEAL two big elections in Florida! We are watching closely!”

On the campaign trail in 2015, Trump claimed that he would be the “most militaristic” president the country had ever seen. (He likely meant he would be the most supportive of the military, rather than the one most prone to start wars, which is what that phrasing might more readily imply.)

His words and actions, though, have not necessarily reflected support for the military and its members. Before he became president, Trump insulted the late Sen. John McCain, a former POW, saying that he himself preferred those who had not been captured. He also insulted a Gold Star Muslim family whose son had been killed in 2004 in Iraq while saving those under his U.S. Army command.

Since he became president, Trump has made but a single visit to Dover Air Force Base to meet the returning coffins of fallen soldiers and has never visited troops in a combat zone. Even the two major accomplishments he boasts of ―providing record-high budgets for the military and passing a law to let veterans see local private doctors ― are both false.

Obama approved a $721 billion defense budget in 2010 and a $717 billion budget in 2011. Both were higher than the $716 billion budget this year that Trump repeatedly brags about – even before adjusting for inflation. And the “veterans choice” program that Trump claims passed because of him was actually also passed under Obama, in 2014.

And now, Trump has deployed thousands of troops to the Mexican border to string up barbed wire against what he describes as an “invasion” of Central American refugees seeking asylum, even though they are still hundreds of miles away. The soldiers are likely to remain there through the Thanksgiving holiday, at least.

“Ripping people from their families and their training and deploying them to the border for the purpose of, well, your guess is as good as mine,” Fischer said.

Trump himself avoided military service when he had the opportunity during the Vietnam War, receiving four education deferments and then claiming a medical exemption because of bone spurs in his heels.

He later compared the dangers of war to the risks of contracting sexually transmitted diseases from the women he was sleeping with. “It is my personal Vietnam,” he told radio host Howard Stern in 1997. “I feel like a great and very brave soldier.”

Despite his personal avoidance of military service, though, Trump has long described himself as a great supporter of the armed forces and has particularly enjoyed the pageantry associated with it.

After attending France’s Bastille Day parade in 2017, Trump told the U.S. Defense Department that he wanted a full military parade of his own, including tanks, for Veterans Day 2018. But after cost estimates of $92 million for the event ― which included estimates for repairing roads damaged by the tanks – were leaked in August, Trump canceled the parade and announced he would go to Paris, instead.

“The local politicians who run Washington, D.C. (poorly) know a windfall when they see it. When asked to give us a price for holding a great celebratory military parade, they wanted a number so ridiculously high that I cancelled it. Never let someone hold you up! I will instead attend the big parade already scheduled at Andrews Air Force Base on a different date, & go to the Paris parade, celebrating the end of the War, on November 11th. Maybe we will do something next year in D.C. when the cost comes WAY DOWN. Now we can buy some more jet fighters!” he wrote in a pair of Aug. 17 tweets.

But there was no parade of any consequence in Paris this past weekend. European leaders have been de-emphasizing military might and nationalism – among the causes of both World Wars – and emphasizing international cooperation, which Trump has openly disdained since taking office.

After receiving much criticism for skipping Saturday’s visit to the cemetery near Bellau Wood, where nearly 2,000 American troops died in a critical battle in 1918, Trump did keep his scheduled visit to the cemetery at Suresnes on the outskirts of Paris just before his flight back to the United States on Sunday.