Under Trump The EPA is More About Politics Than Science

A former Trump campaign aide is now vetting hundreds of millions of dollars in grant money the EPA gives out to worthy environmental science and projects each year. It could mean that thousands of science projects are in jeopardy under the Trump administration.

In late August the energy and environment website E&E News revealed a directive from EPA Administrator Scott Pruitt instructing all grants to be routed to Konkus. If Konkus “has any concerns, comments, or questions on the solicitation,” it reads, he will intervene in the grant process. 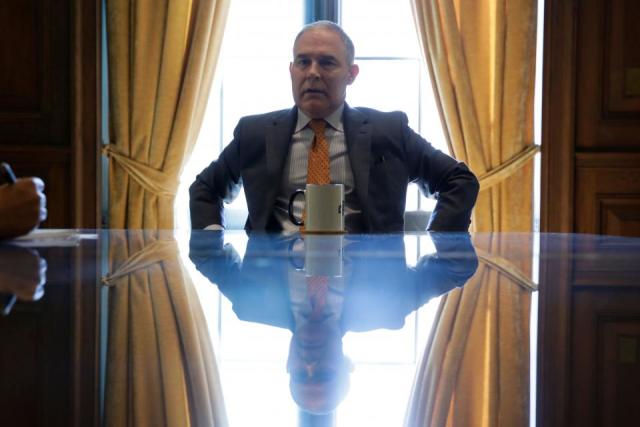 Konkus’ title at the agency is deputy associate administrator for public affairs, placing him in the EPA’s communications department. From 2013 to December 2016 he served as executive vice president at the political consultancy Jamestown Associates. Konkus joined the EPA in early February after acting as Pruitt’s “sherpa” during his confirmation hearings.

President Donald Trump, Pruitt has questioned the very existence of climate change and whether it is man made. President Donald Trump outlined his plan to cut $2.4 billion from the EPA’s budget in 2018 last March. About half of the agency’s annual $8 billion budget goes to grants.

Konkus is now making decisions about which scientific projects are worthy of funding. So far he has cancelled nearly $2 million for university and nonprofit organization projects.

An EPA spokeswoman pointed out to The Post that the figure represents just 1 percent of grants that have been given since Pruitt took office.

The new policy is a break with tradition and shows a politicization of the grant process. Public relations are not usually involved in funding decisions.

Yet Konkus is not the only political appointee at the agency. Pruitt is staffing the upper ranks of the agency, which regulates America’s energy and oil and gas industry, with climate change deniers.

At the end of August former secretary of the Wisconsin Department of Natural Resources (DNR) Cathy Stepp was appointed to head one of the EPA’s regional offices. “Her qualifications?” a release from the Natural Resources Defense Council (NRDC) asked, “Stepp doubts human activity is the primary cause of climate change.”

While Stepp was serving in Wisconsin the EPA had to step in twice to spur her to deal with issues such as manure-contaminated drinking water. She also told her department to remove information from their website talking about how carbon emissions impact climate change. Fines for violating environmental rules shrank during the six-years Stepp headed Wisconsin’s DNR.

Over the weekend the EPA took a page from President Trump’s playbook and began attacking journalists from the Associated Press who reported that the EPA had not yet visited toxic dumps in and around Houston, Texas, after Hurricane Harvey made landfall August 25.

A majority of the sites, AP reporters found, were accessible by foot or vehicle. The EPA accused the newswire of ‘fake news.’

Since Trump’s inauguration the EPA’s news releases have taken a decidedly pro-energy industry turn, New Yorker magazine fact checker Talia Lavin pointed out in a series of tweets Saturday. The press releases, Lavin said, show an EPA “that has near utterly abdicated its duty to regulate” that industry.

In calling the AP’s reporting false and targeting Biesecker, the agency “is engaging in political smearing of the press and critics,” she said.

In late August a group of Democratic Senators accused Pruitt in a letter of taking “deliberate steps to thwart transparency” at the agency, including forbidding “staff from taking notes during meetings, so that they do not create records of your questions or directions.”

When questions about Konkus’ qualifications to evaluate scientific and other environmental projects applying for grants were put to the EPA by E&E News, a spokesperson said, the “grants are being reviewed to ensure they adhere to the Trump administration’s goals and policies and the EPA’s back-to-basics agenda.”