Thousands of people are being arrested and jailed each year because of outstanding civil debts, despite the United States banning debtors’ prisons nearly 200 years ago, according to a new report from the American Civil Liberties Union.

An estimated 77 million Americans have debt that has been turned over to a private collection agency, the ACLU claims. The union has alleged that private debt collectors are partnering with local courts and prosecutors’ offices to use the criminal justice system to punish debtors and to try to force repayments, even when debts are in dispute.

The ACLU said it found courts in 26 states and in Puerto Rico where judges has issued arrest warrants for alleged debtors at the request of private debt collectors. 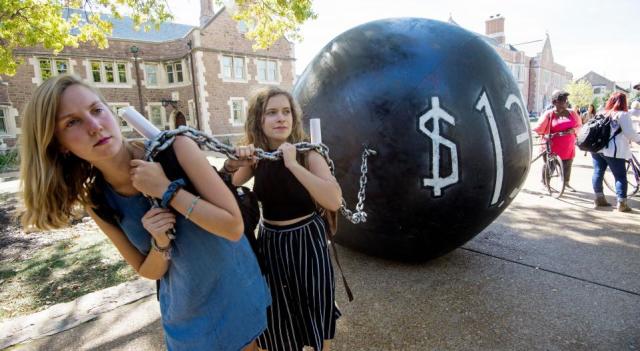 Debtors’ prisons were abolished by Congress in 1833, but the ACLU said courts have issued tens of thousands of arrest warrants every year for people who fail to show up in court to deal with unpaid civil debt judgments.

“The private debt collection industry uses prosecutors and judges as weapons against millions of Americans who can’t afford to pay their bills,” said Jennifer Turner, the principal human rights researcher at the ACLU and author of the “A Pound of Flesh: The Criminalization of Private Debt” report, which the union has touted as the first-ever glimpse into the impact of cooperation between courts and the private debt collection industry.

“Consumers have little chance of justice when our courts take the debt collector’s side in almost every case—even to the point of ordering people jailed until they pay up,” Turner added in a statement provided by the ACLU.

The Urban Institute estimates that one in three adults in the U.S. has had a debt that has been turned over to a private collection company, with more than 6,000 of these companies operating in the U.S.

The ACLU said that thousands of these debtors have been arrested and jailed, with many more being threatened with imprisonment. The report tells the stories of dozens of people who said they have been threatened with arrest over their outstanding debts.

Tracie Mozie of Dickinson, Texas said two armed U.S. marshals entered her bedroom in 2014 to arrest her for failing to appear in court over a $1,500 federal student loan she took out in 1986 to pay for truck-driving school.

“They had a warrant for my arrest and I asked them for what, he didn’t say what it was for. He said, ‘He’ll tell you later,’” Dickinson told researchers.

Mozie said she had a prosthetic leg, which she had to put on before marshals could shackle her feet and waist before taking her into custody.

She said she could not afford to pay back her loan, which had grown to more than $13,000 with interest and fees, because she is unemployed and living on disability benefits.

Mozie described how she is still shaken from the experience of being jailed overnight, telling researchers: “I’m scared someone is going to come to my door and get me again.”

In another case cited in the report, a single mother in Missouri told researchers she was arrested and jailed for three days after she failed to pay back a high-interest payday loan of $425.

“Our courts have become mills for these companies, approving without evaluating scores of arrest warrants, wage garnishments, property seizures, default judgments, and other legal actions against consumers accused by debt collectors of owing money,” she added.

The ACLU said researchers analyzed more than 1,000 cases in which judges issued arrest warrants for alleged debtors and found that courts helped debt collectors “coerce alleged debtors to pay up, even when there’s no evidence the debt is owed or when the person isn’t legally required to pay.”

“For example, many judges issue the requested warrants without checking whether the person has the ability to pay,” the ACLU said.

Turner also said the use of the court system to collect debt impacts “Black and Latino people most harshly because of longstanding gaps in poverty and wealth.”

“The impact of predatory debt collection practices falls most heavily on minority communities, who often lack the savings, financial assets, or inherited wealth to avoid financial disaster,” she said. “And some studies show there are marked racial disparities in which communities debt collectors choose to target for lawsuits.”

The ACLU report calls for legislation that would prohibit courts from issuing arrest warrants in debt collection proceedings and ensure that people cannot be jailed over civil debts that they “haven’t been notified about, can’t pay or aren’t legally obligated to pay.”