This Thanksgiving, Try Something New: Decolonize Your Mind 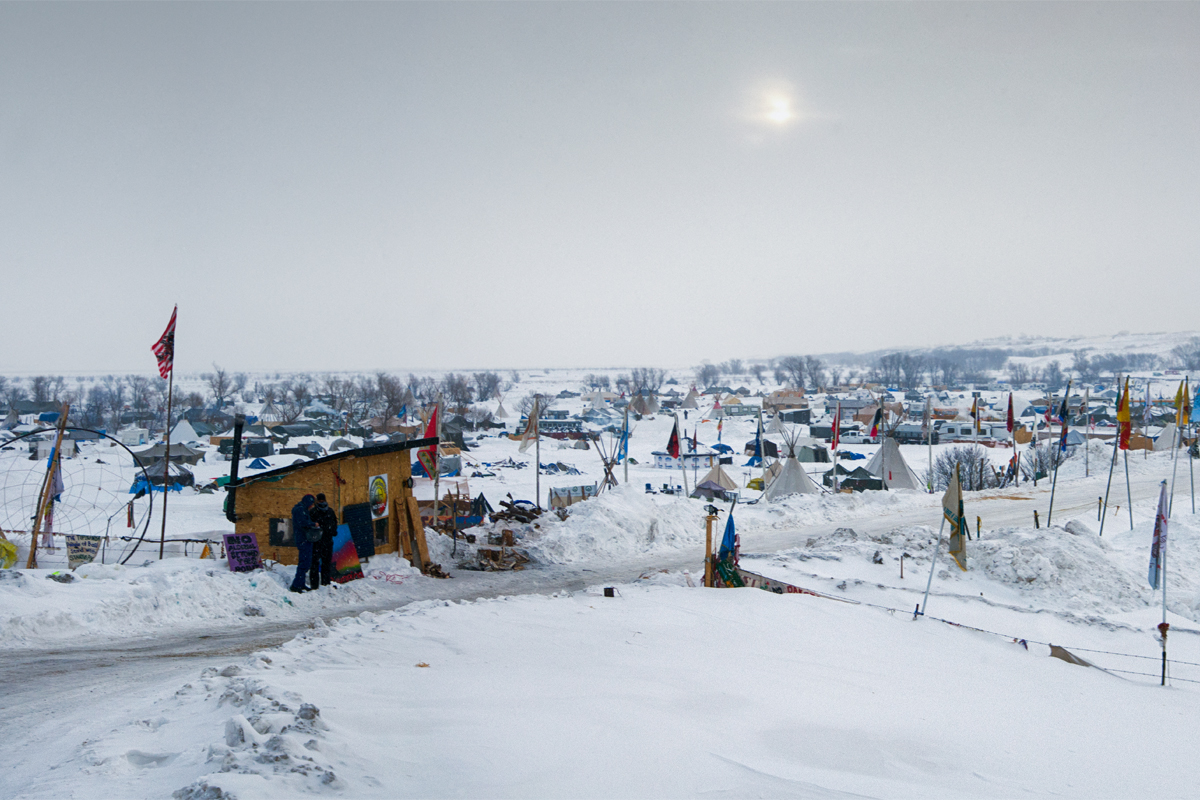 Entrance to the Oceti Sakowin Camp at Cannon Ball, North Dakota, on January 6, 2017. Photo credit: 7Michael on iStock.
Traditionally, Ojibwe people observe a lunar calendar. Each moon, or giizis, is often named after activities conducted during those times, weather, harvests, or other notable things in Ojibwe life. November coincides with Gashkadino-Giizis or Freezing Over Moon.

Since beginning my career as a journalist, however, I have come to think of November, National Native American Heritage Month, as the Moon of Explaining Indians to White People.

Inevitably I get requests from editors of mainstream publications to write opinion pieces about the Native perspective on the month and the tie to Thanksgiving.

Similarly, local church, school, and civic organizations approach me to present a generic version of Native dancing, crafts, traditional food preparation, spirituality, and/or provide a comprehensive but extremely brief and benign history of Native peoples in the United States. Most of these requests, unfortunately, frame Native folks firmly in the past tense.

Early in my career, I would take on these requests and assignments with a fire-in-the-belly determination to shatter stereotypes, expose the full history of federal policies toward Native peoples, and most importantly, let my neighbors know we are still here.

Mostly, however, folks didn’t want to hear about the diversity of Native cultures, the complexity and history of federal policies affecting us, our sophisticated understanding of our relationship to the earth, or the fact that Native peoples embrace popular culture in addition to their own traditions.

My audience’s eyes would glaze over at these talks. They wanted to learn instead about how Native peoples lived before European contact. They wanted to know about how they could participate in ceremonies, dances, drumming, and spirituality. They wanted me to give them Indian names, identify their power animals, and teach them how to be shamans. Mostly they just wanted to play Indian.

During my long tenure as an Ojibwe woman and a journalist, I’ve witnessed popular culture’s interest in Native peoples wax and wane. I’ve lived through the beginnings of the American Indian Movement, Wounded Knee, Alcatraz, and, most recently, Standing Rock.

Unfortunately, the patterns of public narrative regarding Native peoples show a shocking sameness. We are still regarded as denizens of history, defined by our “plight,” or seen as supernatural noble, selfless defenders of the Earth. Our cultures, traditions, and spirituality have been subsumed into the great buffet of American consumerism; we are food for hipster and New Age appropriation, one in the dizzying blur of passing social memes.

All of it has become too tedious and painful, so I tend to lie low in November and hope to dodge the Moon of Explaining Indians to White People.

This year, however, events on the ground in Indian Country and beyond have awakened me from my cranky sleep of ennui. The fallout from climate change, exacerbated by the unbridled greed of the world’s current politicians and their supporters, is on track to make our Earth uninhabitable. The events at Standing Rock, and the public attention they garnered regarding the importance of safe water and the environmental dangers posed by expanded reliance on fossil fuels, revealed a growing global awareness that business as usual—the colonial model of ever-growing exploitation—is unsustainable.

Although millennials working to forward their own interests and brands and becoming instant experts on Indians were thick on the ground at Standing Rock, there was a flurry of something almost intangible in the camps. People let their guards down and found the sacred, if only for a few fleeting moments.

Therefore, emboldened by this growing awareness, I would like to make a modest proposal for commemorating Native American Heritage Month: Decolonize your mind. Find the sacred.

You can do this easily. You don’t need to buy anything. No ceremony; name change, travel; acquisition of a power animal; funding; community outreach; or creation of a committee, program, or agency is required.

Make no mistake, however: Decolonizing the mind is not without risk or discomfort.

To decolonize is not only an act of humility and acceptance; it requires the courage to take responsibility for our role in this great, relentless process that is our life on Earth. In decolonizing our minds, we embrace the notion that we are a part of rather than apart from the Earth. Whether or not we enjoy camping or prefer to dwell in high-rise apartments without our feet ever leaving pavement, we are all subject to the same natural processes. There is no escape; there is only community and responsibility.

The understanding that humans are merely one part of a huge complex of interconnected creatures is the basic tenet of most Native cosmologies. In recognizing this tenet, we can’t help but love and hold the Earth and ourselves sacred. So how do we begin?

The first Christian missionaries who proselytized among the Ojibwe in the 17th century found the people willing to listen to priests talk of Jesus and the Bible. In their dispatches home, however, the missionaries complained that the Ojibwe spent far too much time in idle visiting, leaving productive tasks undone.

Although unrecognized and appreciated by the missionaries, the Ojibwe were engaged in important work. These spans of unstructured shared time allowed people to engage spiritually and grow to understand needs and formulate paths forward. Ojibwe know and value the power of visiting. Unencumbered by agenda points and outcomes, we trust that through prayer and community that we can determine how to honor and care for the environment, each other, and ourselves.

So during the month of the Freezing Over Moon, why not spend time visiting with others especially those whose ethnicity and social class differs from your own? Eat, drink coffee, let silence fall, and wait to find out what needs to be done. At first, it might be just about being human together; decolonization needs these roots to begin.

This article originally appeared in YES! Magazine, and is reprinted with permission.