President Trump walks out after an announcement about the Paris climate agreement in the Rose Garden of the White House in Washington on June 1. (Andrew Harrer/Bloomberg)

Kathleen Hartnett White was nominated by President Trump last month to lead his Council on Environmental Quality, the top environmental position within the White House. Under Barack Obama, the council’s initiatives included implementing sustainability efforts throughout the executive branch and establishing systems for addressing climate change.

Based on her testimony Wednesday during a confirmation hearing, it’s safe to assume that Hartnett White will not continue similar efforts.

Our Chris Mooney articulated the various ways in which Hartnett White was pressed on the issue of climate change, including her insistence that, while human activity probably contributes to the warming climate, the extent of that contribution is “very uncertain.”

That’s not the view of the vast majority of climate scientists, of course. Climate scientists agree that the burning and extraction of fossil fuels releases tons of gases into the atmosphere — carbon dioxide and methane, for example — that serve as a blanket (or the glass in a greenhouse, if you will), preventing heat from escaping. This is, for the time being, still the position of the Environmental Protection Agency.

Hartnett White’s position is a political one. From the outset of the modern debate over climate change, uncertainty has been the watchword of those who weren’t interested in addressing greenhouse-gas emissions. That asserted uncertainty once centered on whether warming was happening. Then it focused on whether humans were involved. Now, in the Hartnett White iteration, it centers on how much humans are involved. (This was the position Trump espoused in an interview with the New York Times during the campaign.)

In the case of Hartnett White, that insistence that there’s uncertainty — again, a view not widely held in the scientific community, as NASA points out —  leads to some difficult rhetorical dead ends.

Consider this exchange from Wednesday, in which Hartnett White is questioned by Sen. Sheldon Whitehouse (D-R.I.). 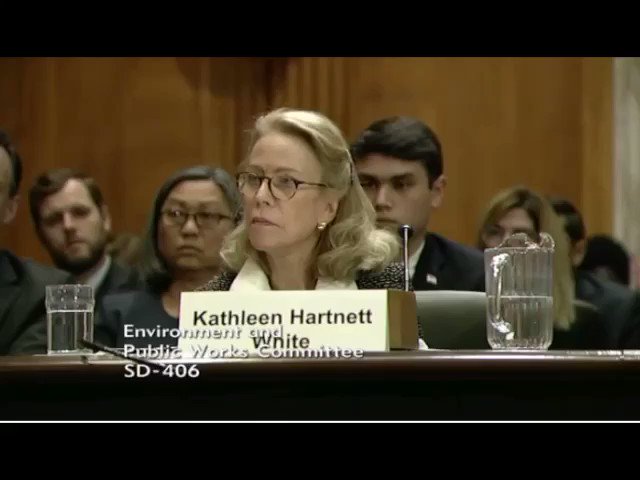 Whitehouse asks two questions. The first is whether Hartnett White is aware of the extent to which oceans trap heat. This is a complicated question that is probably outside the awareness of a layperson. Whitehouse seems to believe that such a question — not a complicated one in the context of the issue of climate change — should be understood by the nominee to serve in the top White House environmental position.

In short, research suggests that as much as 90 percent of the heat trapped by the atmosphere ends up being stored in the Earth’s oceans. That has an expected consequence: Ocean water temperatures are higher now than they used to be. Those warmer water temperatures have some perhaps unexpected consequences, too. It’s shifted the habitats of sea animals and endangered other sea life. The environmental effects, in other words, are not insignificant.

Notice, though, that Hartnett White doesn’t say that she knows whether more than 50 percent of the heat trapped in the atmosphere has been stored in the oceans (the correct answer, of course, being that far more than 50 percent has). All she knows is that, whatever the answer, it’s contested. How it’s contested isn’t clear; all she knows is that it is. Her knowledge of the issue is limited to one data point: Uncertainty exists. We’ll note that that data point is not supported by any available evidence.

We noted some unexpected effects of a warming ocean above. But anyone who’s ever tried to boil water on a stove is aware of another effect of warming water: It expands. Fill a saucepan to the brim with water and crank up the heat — you know what happens next.

But when Whitehouse asks that question — does water expand when it’s warmer? — Hartnett White won’t answer.

This is important in the context of climate change. Warmer seas mean higher sea levels, and higher sea levels mean more flooding and more damage to coastal real estate. Melting ice due to global warming will raise sea levels, but hotter seas will expand by themselves.

The answer goes back to our point at the outset. Hartnett White was probably nominated to run the CEQ because she’s willing to brush aside the scientific consensus on climate change, not in spite of it. If that means that an awkward video trickles out over social media for one day, so be it.

Philip Bump is a correspondent for The Post based in New York City.