The line between facts and reality has vanished. 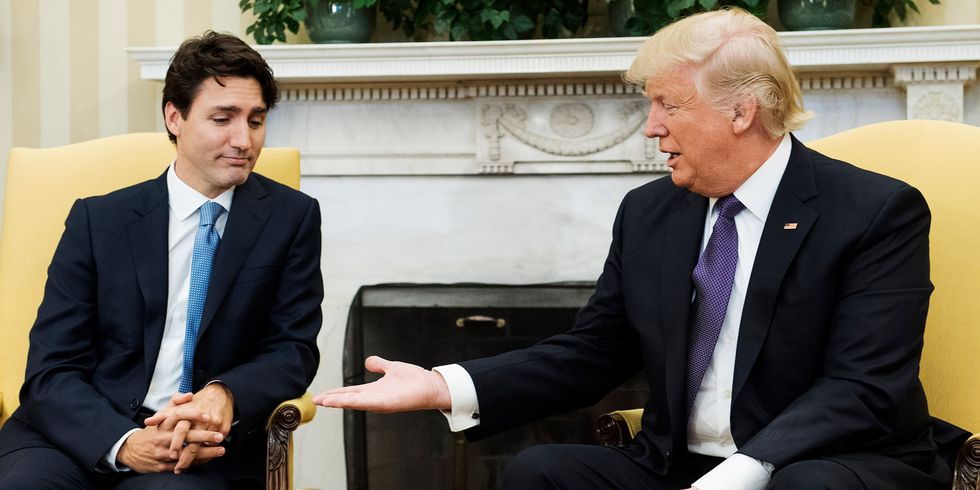 It’s fun to have a Normal Adult President who engages in petty feuds with the United States’ closest allies to make himself feel strong. To “win” the feud, President Trump makes things up and insists they are true, over and over. To feel even stronger, he brags about this in front of large groups of people—and likely piles more lies on top in the process.

In a fundraising speech Wednesday evening reported on by The Washington Post, Donald Trump, the nominal leader of the free world, told a story about hosting Canadian Prime Minister Justin Trudeau in the Oval Office recently. Trudeau suggested to Trump that the U.S. does not actually have a trade deficit with Canada—the basis Trump claimed for his new steel and aluminum tariffs. Trump reacted as any Adult President would:

“Trudeau came to see me. He’s a good guy, Justin. He said, ‘No, no, we have no trade deficit with you, we have none. Donald, please,’ ” Trump said, mimicking Trudeau, according to audio of the private event in Missouri obtained by The Washington Post. “Nice guy, good-looking guy, comes in — ‘Donald, we have no trade deficit.’ He’s very proud because everybody else, you know, we’re getting killed.”

This is already sufficiently batshit. The president is admittedly just making things up in meetings with world leaders to mess with them and feel a rush of power. At one point, he says he responded to a factual claim from Trudeau—”we have no trade deficit”—by saying he “feels differently.” About objective facts. This is Truthiness Unchained, running riot at the highest levels of international politics.

(We’ve heard tales of Trump’s interactions with other leaders before, most prominently those train wreck phone calls when he first took office. He told the president of Mexico, whom he called “Enrique” 14 times to show Tremendous Respect, “You have some pretty tough hombres in Mexico that you may need help with, and we are willing to help you with that big-league.” Trump told Australian President Malcolm Turnbull that he, Trump, is “the world’s greatest person,” and that refugees “are not going to be wonderful people who go on to work for the local milk people.” Turnbull was later caught on tape mocking Trump, but many heads of state simply ridicule the president in public.)

This is more evidence that Trump’s disregard for truth is not always simply a man wandering in the dark. He knows what he’s doing at least some of the time, just as he did when he piled on more lies while telling the story last night:

‘Well, sir, you’re actually right. We have no deficit, but that doesn’t include energy and timber. … And when you do, we lose $17 billion a year.’ It’s incredible.”

The president made up some nonsense and was embarrassed when his own staff presented him with the facts, so while recounting the story publicly—which, to repeat, he in no way had to do—he lied about what his staff told him. The Washington Post, in a subtle bit of (dark) comedy, simply called the same staffers, who will probably be fired by lunch.

Trump seemed to threaten to pull U.S. troops stationed in South Korea if he didn’t get what he wanted on trade with Seoul, an ally. He said the country had gotten rich but that U.S. politicians never negotiated better deals. “We have a very big trade deficit with them, and we protect them,” Trump said. “We lose money on trade, and we lose money on the military. We have right now 32,000 soldiers on the border between North and South Korea. Let’s see what happens.”

“Our allies care about themselves,” he said. “They don’t care about us.”

The president has never understood that the United States maintains alliances for a number of reasons, but almost never just to make some money. Geopolitical strategy is obviously beyond a man of even Trump’s formidable intellect, but you’d think he might at least grasp that we have troops in South Korea to deter North Korean aggression—something he was focused on, like, three days ago—and that might be more valuable than forcing a trade surplus with the South. Then again, the president discussed his 2016 election win last night, so we know where his head’s at.

And then there was this:

He accused Japan of using gimmicks to deny U.S. auto companies access to its consumers, said South Korea was taking advantage of outdated trade rules even though its economy was strong and said China had single-handedly rebuilt itself on the back of its trade surplus with the United States.

“It’s the bowling ball test. They take a bowling ball from 20 feet up in the air and drop it on the hood of the car,” Trump said of Japan. “If the hood dents, the car doesn’t qualify. It’s horrible,” he said. It was unclear what he was talking about.

It was unclear what he was talking about. The phrase heard ’round the world. Just put that on repeat—and not just for this speech. This, as a reminder, is the man we’re all supposed to believe is going to march into a meeting with Kim Jong-un and solve the North Korean nuclear crisis. Donald Trump will succeed where a Rhodes Scholar and an editor of the Harvard Law Review failed before him—something Trump also boasted to the crowd last night:

Trump also described for donors his decision to meet with North Korean leader Kim Jong Un in the coming months through the prism of making history and besting his predecessors while lamenting his media coverage, questioning U.S. allies and labeling his presidency as “virgin territory.”

“They couldn’t have met” with Kim, he said, after mocking former presidents Barack Obama and George W. Bush. “Nobody would have done what I did.”

“It’s called appeasement: Please don’t do anything,” he said of other presidents.

“They say, ‘Maybe he’s not the one to negotiate,’ ” he said, mocking the voice of a news anchor. “He’s got very little knowledge of the Korean Peninsula. Maybe he’s not the one. … Maybe we should send in the people that have been playing games and didn’t know what the hell they’ve been doing for 25 years.”

The through lines of Trump’s meandering speech were simple: Trump was tougher than all the rest, and the United States was not going to be laughed at or taken advantage of.

One thing’s for sure: “He’s got very little knowledge of the Korean Peninsula.” Trump seems to think previous presidents did not meet with North Korean leaders because they were weak or afraid. The idea that maybe the decision was strategic, and that the Kims’ longtime goal was to get the visual of them meeting an American president as equals, thereby establishing them on the world stage, never occurs to him. But no one ever said the president was a foreign policy expert. He’s a Branding Guy—just ask him.

He actually did. There’s a lot to fear in this report, not least that the guy ranting about Japanese bowling balls intends to get in a room with Kim Jong-un and hash out this whole nuclear thing. But perhaps the most frightening thing is that it’s genuinely unclear when the president is dismissing facts for his own gain or self-aggrandizement, and when he genuinely cannot tell the difference between reality and the inside-out Truman Show he is constantly constructing around himself. At one point, the WaPo headline read, “Trump says he made up facts.” A line for our times, if ever there was one.