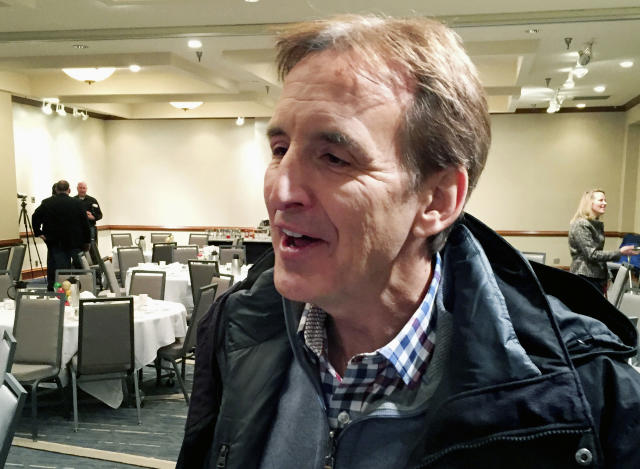 In this Dec. 8, 2017, file photo, former Minnesota Gov. Tim Pawlenty speaks after a Chamber of Commerce breakfast in St. Louis Park, Minn. The ranks of the forgotten Republicans are growing. They are members of Congress, governors and state party leaders who have been left behind by President Donald Trump’s Republican Party. Some, like former Minnesota Gov. Tim Pawlenty, were forced out. (AP Photo/Steve Karnowski, File)

NEW YORK (AP) — The ranks of forgotten Republicans are growing.

Some were forced out, such as Tim Pawlenty, a former two-term Minnesota governor who lost this week’s bid for a political comeback. Some, such as the retiring Republican Sen. Bob Corker, chose to leave on their own. Others still serve, but with a muted voice.

Whether members of Congress, governors or state party leaders, they are struggling to fit into President Donald Trump’s Republican Party.

The expanding list of marginalized GOP leaders underscores how thoroughly Trump has dominated — and changed — the Republican Party in the nearly two years since he seized the presidency. The overwhelming majority of elected officials, candidates and rank-and-file voters now follow the president with extraordinary loyalty, even if he strays far from the values and traditions many know and love.

The Republicans left behind are warning their party with increasing urgency, though it’s unclear whether anyone’s listening.

“I hope this is a very temporary place for the Republican Party,” said Corker. “I hope that very soon we will return to our roots as a party that’s very different, especially in tone, from what we’ve seen coming out of the White House.”

Isolation and political exile have been their rewards.

Their diminished roles leave fewer Republican leaders willing to challenge Trump under any circumstances, even in his darkest moments.

Fact checkers have recorded an extraordinary level of false and misleading statements flowing out of the White House. And beyond dishonesty, some of the forgotten have decried a disturbing pattern of racially charged rhetoric on issues like immigration, NFL anthem protests and Confederate monuments.

“White nationalism isn’t something I’m ever going to be comfortable with. But it is embraced by, or simply doesn’t bother, a lot of Republicans,” said former Ohio Republican Party chairman Matt Borges, once a Trump confidant who was forced from his leadership post after criticizing Trump in the weeks leading up to the 2016 election.

After Trump’s victory, Borges returned to practicing law, while he continues to play a modest role in local politics.

“To me, it became a matter of how much of your soul are you willing to sell. I would be the wrong person to be leading this party right now,” Borges said.

Trump remains popular among rank-and-file Republicans. And the vast majority of Republican candidates across the country this midterm season are pledging unconditional loyalty — and being rewarded with primary victories.

Gallup found that 82 percent of Republicans approved of the president’s job performance earlier this month. That’s compared to just 34 percent of independents and 7 percent of Democrats.

Kasich, who has not ruled out a primary bid against Trump in 2020, said the president’s approval is misleading because the universe of people identifying as Republican is shrinking.

“We’re dealing with a remnant of the Republican Party. The party is not what it was,” Kasich said in an interview.

The term-limited governor said he’s content to focus quietly on addressing issues like the opioid epidemic and urban violence on a bipartisan basis while the Trump-led GOP focuses on partisan squabbling.

“Let those in the Republican Party who want to be ideological and partisan, let them wallow in their own failures,” said Kasich.

Other GOP leaders aren’t feeling quite so emboldened.

Pawlenty’s quest for a third term collapsed after Republican primary voters determined his experience — and his years-old description of Trump as “unfit and unhinged” — weren’t welcome.

Pawlenty politely declined to be interviewed, but a former aide, Alex Conant, said this week’s result, like those of other primary elections this year, sent a clear message about the modern GOP.

“There’s not a lot of room for dissent in the Republican Party right now,” Conant said. “Moderates don’t feel welcome. And if you’re not loyal to Trump, there’s not necessarily room for you.”

The details may be different, but Pawlenty’s unexpected exit is reminiscent of that of other public officials who have struggled to find their footing in the Trump era.

Bush, another Trump critic, declined to comment for this story. He has been forced into silence, at least in part, for fear of hurting his son’s political career. In June, Donald Trump Jr. withdrew from a fundraiser for Texas land commissioner George P. Bush after Jeb Bush criticized the president’s policy of separating immigrant children from their families at the border.

Another periodic Trump critic, former House Speaker John Boehner, is in the midst of a 20-stop bus tour to help raise money for vulnerable House Republicans.

Spokesman David Schnittger said it was up to each of the campaigns involved to disclose Boehner’s help. “I’m not sure anyone has exercised that option to date,” he said.

Boehner’s successor, Paul Ryan, has seen his once sky-high career prospects flounder in the Trump era. The 2012 GOP vice presidential nominee has occasionally criticized Trump, but he is retiring at the end of the year.

Days later, Sanford described Trumpism as “a cancerous growth.” As he prepares to leave Congress, he’s warning the GOP the cancer is spreading.

“We have a president that will tell numerous dis-truths in the course of a day, yet that’s not challenged,” Sanford said in an interview. “What’s cancerous here is in an open political system, there has to be some measure of objective truth.”

“I’m baffled by the way so many people have looked the other way,” he said.

Asked whether he feels like he fits in today’s GOP, Sanford said simply, “No.”

Back in Ohio, Borges vowed that his departure from politics was only temporary.

“The Trump phenomenon is going to end at some point in time. That might be six years, that might be two years, that might be sooner. No one knows,” the former Ohio GOP chairman said. “When it does end, it’s the job of a lot of us … to make sure that the party is still populated by good, honest, decent candidates and officeholders who we can continue to be proud of.”