Trump is guilty of conduct unbecoming an officer and a gentleman 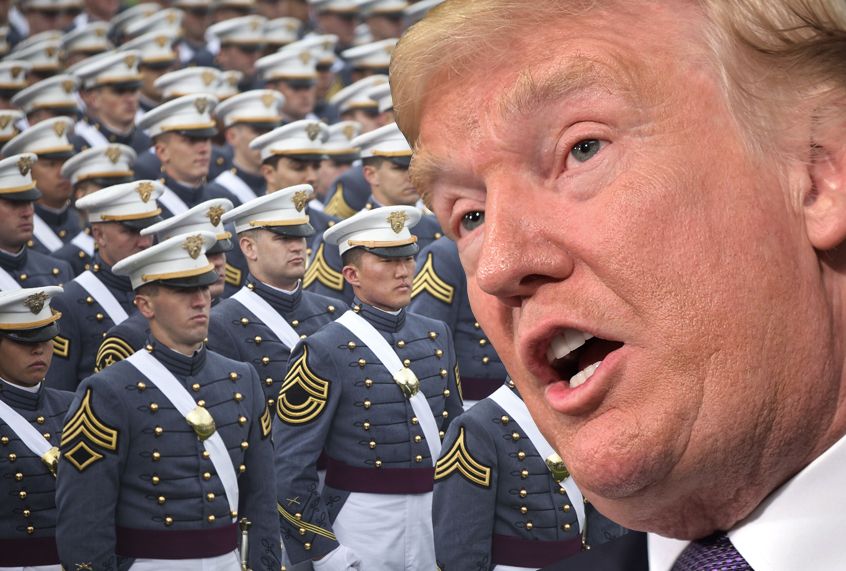 It was the spring of 1970, and I was in a shitload of trouble in the Army when the powers that be at Fort Carson, Colorado, decided to charge me with Article 133 of the Uniform Code of Military Justice, “Conduct unbecoming an officer and a gentleman.” They were looking for a way to run me out of the Army because I had had the temerity to suggest after I had lost two soldiers in my platoon to heroin that we had a real problem with hard drugs in the Army. Soldiers were coming back from Vietnam with heroin habits, and the Mob was moving into the towns near Army posts and supplying this new market with the drug the addicted soldiers craved. One soldier in my platoon had been shot in the stomach with a sawed-off shotgun because he was dealing, and the Mob didn’t want rogue operators like him poaching on their market.

After two guys in my platoon died, another of my men came to me and admitted that he was addicted and wanted to get detoxed and rehabilitated. I put him in my car and drove him to the post hospital and together, we went to check him into their rehab unit. When the nurse asked him how much he was drinking, he explained that alcohol wasn’t his problem. He was addicted to heroin. The nurse picked up the phone and called the MPs. Within an hour, he was under arrest and in the stockade going through withdrawal cold turkey.

The offense I committed was to suggest to the commanding general at Fort Carson, (then) Major General Bernard Rogers, that he should order an amnesty program so that soldiers seeking treatment for heroin addiction could get rehabbed, not arrested. In a meeting in his office, Rogers told me if he instituted such a program, he would lose his career. I told him I wasn’t really interested in his career, because I had two guys in my platoon who hadn’t lost their careers, they’d lost their lives.

This was not the way a second lieutenant was supposed to talk to a major general, and after spending every one of my 22 years on the earth in the Army and having a general for a grandfather, I knew it. I had had more men die in six months than a typical platoon lost in the same amount of time in Vietnam. I knew that I had just signed the death warrant for my Army career, but I didn’t give a shit. I was finished being a good little West Point graduate and lieutenant. The Army I had grown up in wasn’t the Army I was serving in. It was coming apart at the seams. Fifteen percent of the 5th Mechanized Infantry Division was addicted, and Rogers knew it. The Pentagon knew the problem was a huge one, not only in Vietnam, but all over the Army. They weren’t going to do anything about it because it would be bad for the Army’s image.

The easiest way to get me out of the Army was to charge me with insubordination and court martial me. But the officer to whom I had been insubordinate was Major General Rogers, and he didn’t want to testify at a court martial in which he could be questioned about the details of the insubordination I was charged with. They knew I would take the opportunity of the court martial to put the Army’s drug policy — and the way Rogers was implementing it — on trial. So the word was passed down to the brigade commander to get me on something under the Army’s catch-all charge. “Conduct unbecoming” could be anything they said it was.

It just so happened there was a Specialist Fourth Class (Spec-4) who had recently been caught with marijuana, so the brigade commander told my battalion commander to offer him a deal. They would drop the charges against him if he reported that I had flashed a peace sign at him instead of saluting when we passed in the battalion area. The Spec-4 got word to me through one of the cooks in the mess hall that I was being set up. Sure enough, I was called into the battalion commander’s office and charged with conduct unbecoming an officer and a gentleman. The charge was that I had formed a “V” with my forefingers and flashed the peace sign when the Spec-4 saluted me. And what do you know, but they had pressured two of the other lieutenants in my company to say that they had witnessed this grave offense against the Uniform Code of Military Justice.

Late that day I met with the Spec-4 and my fellow lieutenants. They wanted to know what they should do. I told them to just play along, that I had something up my sleeve. The next morning I was informed that an “Article 32” hearing would be held that afternoon. They were in a hurry. This was the Army’s equivalent of a grand jury, when evidence would be presented establishing that there was sufficient cause to hold a court martial. My friends and the Spec-4 would be called to testify at the Article 32 hearing.

By this time, I had been made aware by a friend of mine in division headquarters that there was a first lieutenant assigned to the battalion who was in reality a military intelligence agent looking for “subversion” in the ranks, and that the main subversive he was spying on was me. I knew this guy had a direct pipeline to the powers that be at Fort Carson, so I invited him over to my mess hall for a cup of coffee. I told him as soon as we finished our coffee, I was getting in my car and driving over to the provost marshal’s office and charging the brigade commander with theft of government property, since I had it on good authority that he had ordered a sergeant I knew to steal wood that was supposed to be used to build dugouts for the Little League field, so he could use the wood to put up a waist-high stockade fence around his headquarters. In fact, there was a brand new stockade fence that we could see out the window of the mess hall, and a couple of soldiers were in the process of painting it white.

The first lieutenant quickly finished his coffee and fled the mess hall in the direction of the parking lot. A couple of hours later, I was called in by the battalion S-1, the personnel officer, and told that my Article 32 hearing had been cancelled. No explanation was given.

Article 133 of the Uniform Code of Military Justice reads: “Any commissioned officer, cadet, or midshipman who is convicted of conduct unbecoming an officer and a gentleman shall be punished as a court-martial may direct.” The Manual for Courts Martial defines conduct unbecoming as lacking “moral attributes” involving “acts of dishonesty, unfair dealing, indecency, indecorum, lawlessness, injustice, or cruelty.”

Broadly defined? Just a tad. But not so broadly that they would charge me subsequently with “lawlessness” I actually engaged in by blackmailing my way out of that court martial. They abandoned using the law and turned instead to a chapter in the Army’s personnel regulations that allowed separation “for the good of the service.” I was entitled to a hearing, but waived my rights and was discharged administratively a couple of months later.

I was 22, and I was an arrogant hothead, but I was right. A year after I left the Army, the Pentagon sent a brigadier general and a chaplain to Capitol Hill to testify before the House Armed Services Committee, where they announced that the Army was beginning an amnesty program designed to deal with its burgeoning problem of heroin addiction, which now involved at least 10 percent of the force. All three of the others involved in the Great Peace Sign Court Martial were out of the Army by that time. A couple of years after that, in March of 1973, the last American combat troops pulled out of Vietnam. The draft was ended that June, and on July 1, 1973, the “all volunteer” military was instituted.

Donald J. Trump, with four draft deferments for college and a designation as medically unfit (4-F) for a bone spur on his heel, was never subject to the Uniform Code of Military Justice. Article II, Section 2, of the Constitution states that “The President shall be Commander in Chief of the Army and Navy of the United States.” I’m still an arrogant hothead, and I am among those who say that as commander in chief, he should be subject to military law today. Article 133 would seem to be tailor-made for Donald Trump. Lacking “moral attributes” involving “dishonesty, unfair dealing, indecency, indecorum, lawlessness, injustice, or cruelty” — the Uniform Code of Military Justice could have been written with Trump specifically in mind.

At the very least, it is the duty of any leader to set an example for others to follow. Trump hasn’t so much set an example as become a poster boy for all of the behavior proscribed by Article 133. He hasn’t even bothered to be subtle about it. One of the first things his lawyers did after he took office was to assert that the laws regarding ethical behavior by officers of the Executive Branch of our government did not apply to him.

Well, that’s now an argument before the courts. But the commander in chief who orders soldiers into harm’s way, the man whose orders soldiers are following when they give their lives, has an obligation not to engage in conduct unbecoming an officer and a gentleman whether he is subject to military law or not. It’s the least he can do for those he leads, not to embarrass them every time he opens his mouth or twiddles his thumbs, not to send them into battle with their heads hung in shame.

Lucian K. Truscott IV, a graduate of West Point, has had a 50-year career as a journalist, novelist and screenwriter. He has covered stories such as Watergate, the Stonewall riots and wars in Lebanon, Iraq and Afghanistan. He is also the author of five bestselling novels and several unsuccessful motion pictures. He has three children, lives on the East End of Long Island and spends his time Worrying About the State of Our Nation and madly scribbling in a so-far fruitless attempt to Make Things Better. He can be followed on Facebook at The Rabbit Hole and on Twitter @LucianKTruscott.