This Performance Is a Uniquely American Brand of Authoritarianism

Some Trump supporters know it’s a shtick. That doesn’t make the consequences any less real. 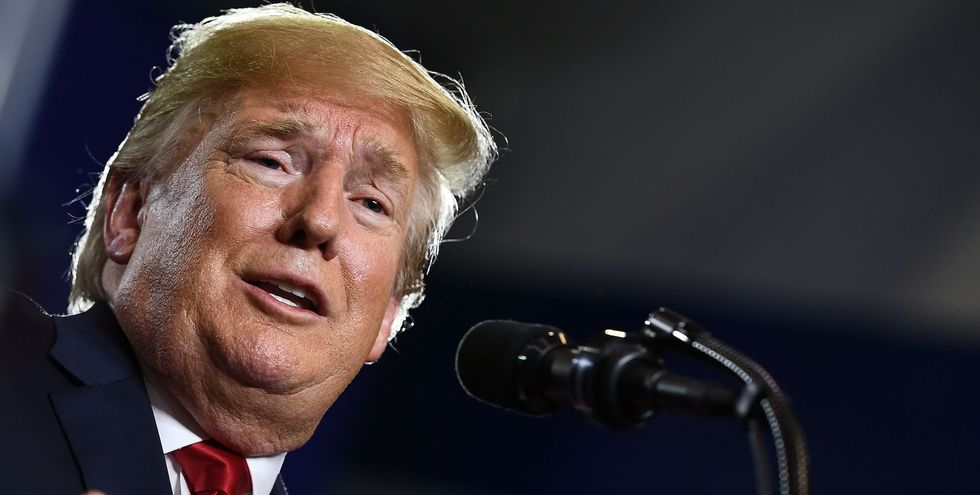 Like it or not, this country that has for so long called itself Exceptional can now take some cues from other nations—specifically, those that slid into authoritarianism.

We have a president who attacks and seeks to undermine all institutions of democracy that provide a check on his power, from an independent judiciary and the rule of law to the free press. (The Republican Congress no longer merits a mention.) He combines that with dehumanizing attacks on vulnerable social minorities, whom he blames for the country’s problems—real and imagined. He has cultivated a base of support whose members have incorporated support for The Leader into their basic identities.

And, as Filipino author Rin Chupeco put it so well in a series of tweets early Tuesday morning, all this has been met by a chattering class of predominantly white elites who deny efforts to resist the slide into autocracy on the basis they are “uncivil.”

Rin Chupeco: Speaking as someone born in the last years of a dictatorship, you Americans are already several steps in one. Ferdinand Marcos’ greatest trick was convincing people all protesters were communist animals, so when they went missing, few cared. Even after bodies were discovered.

Rin Chupeco: Speaking as someone born in the last years of a dictatorship, you Americans are already several steps in one. Ferdinand Marcos’ greatest trick was convincing people all protesters were communist animals, so when they went missing, few cared. Even after bodies were discovered.

Rin Chupeco: These white people & journalists talking about being civil? These were the rich people, the Fil-Chinese, the mestizos in the Philippines who knew they won’t be affected by many of Marcos’ policies, and therefore could ignore them even as the killings started.

Rin Chupeco: But Filipinos have always been susceptible to strongman personality cults, just like your Republicans. (Yeah don’t @ me on this one, Repubs still singing Reagan’s praises despite the fact he was FRIENDS with Marcos and helped him retain power, making it 1000x worse for us.)

Rin Chupeco: White people, journalists who insist on civility- you seem to think civility is a common ground you share with opponents like Trump et al. Here’s a clue – whenever you offer these assholes middle ground, they will invade that space & then claim you never gave them ground at all.

This was in evidence at President Trump’s rally in South Carolina Monday night, which was nominally on behalf of South Carolina Governor Henry McMaster. In reality, it could only ever be about Trump. This was a full exhibition of the Trumpian id, as he rated late-night hosts and talked up his verification-free nuclear deal with Kim Jong-un and explained that if Melania Trump had gotten a facelift, he would let you know.

But one moment in particular spoke to Chupeco’s point:

Aaron Rupar: Trump detours into telling the crowd about a backhanded compliment filmmaker David Lynch gave him, then tells his audience that they are “the super elites.”
“Look, everybody here makes money, works hard, pays taxes. Does a great job.” pic.twitter.com/pECbx0uF1K 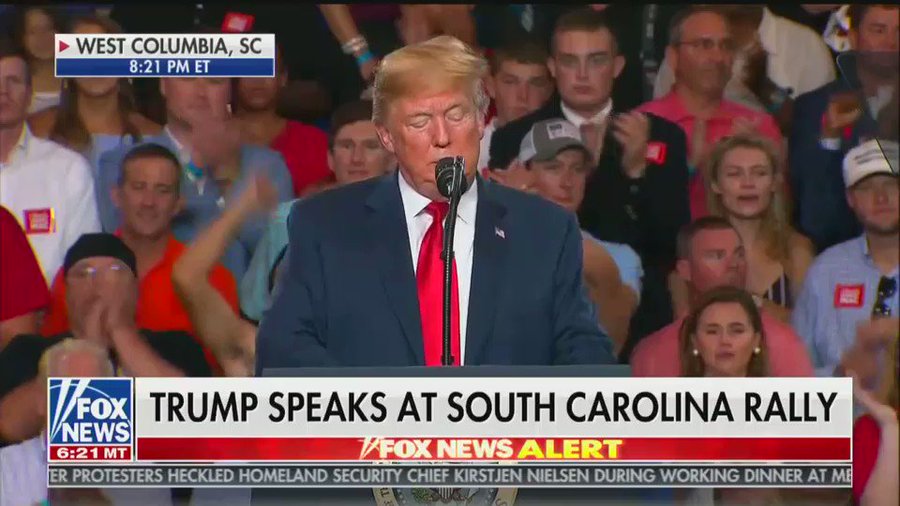 Aaron Rupar: Trump calls the media “the enemy of the people,” then brags about a woman who was recently interviewed and said there was nothing Trump could possibly do to lose her support. pic.twitter.com/pHuDcFM4XW

Here Trump called the free press “the enemy of the people,” a suggestion it spreads false information to the detriment of Trump and, in his extended view, the country. Except he then told the story of a supporter who said she would never abandon him, which the president learned about because … members of “the media” interviewed her. This is part of a long-running performance from Trump, who has openly admitted he attacks the media as “fake” to defend himself against legitimate negative reporting, and that when he says “fake news,” he really means negative coverage:

donald j. trump: The Fake News is working overtime. Just reported that, despite the tremendous success we are having with the economy & all things else, 91% of the Network News about me is negative (Fake). Why do we work so hard in working with the media when it is corrupt? Take away credentials?

Of course, the most troubling thing about Trump’s account a fan is that she has completely abdicated her responsibility as a citizen to hold her elected representative accountable, instead pledging undying fealty to a politician. (You don’t really have to trust Trump on this—accounts like this are common among Trump supporters.) But both sides of this point to the irrelevance of facts, and even intention.

It doesn’t matter that Trump openly admits he derides legitimate coverage as fake. It doesn’t matter that this entire thing is delivered in bad faith, just like all the calls for “civility.” What matters is the performance: Trump, the strongman leader, bashing the Enemies. That includes undocumented immigrants, but it also includes the free press, Democrats, late-night hosts, and anyone else who might stand in the way of The Movement. The details aren’t important.

This has filtered down to the fanbase, which had a fascinating encounter with CNN’s Jim Acosta last night at the rally. 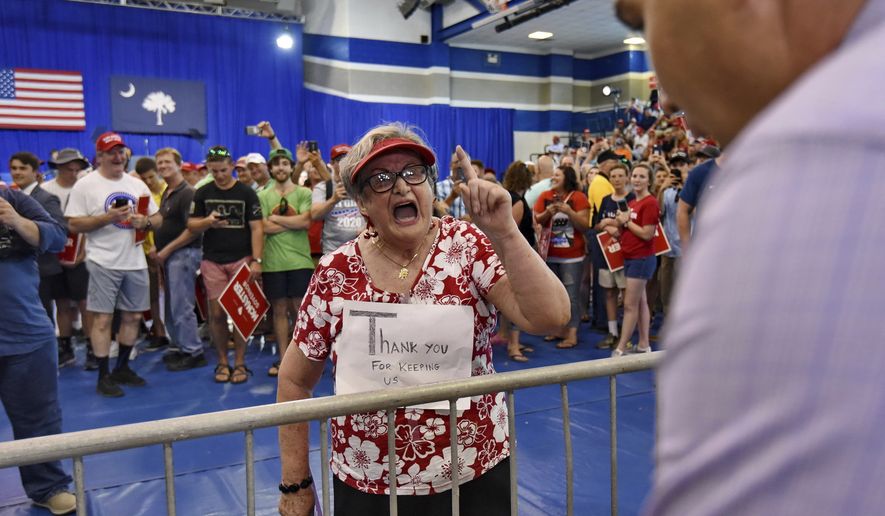 At least some of Trump’s supporters understand his shtick as a performance, and they engage in it, too. That’s why they’re ready with “Build the Wall” and “Lock Her Up!” chants, even when they’re only tangentially related to whatever he’s ranting about. All the world’s a stage, and even Acosta got in on the act, signing autographs for people who just assaulted his integrity and suggested he did not belong there. And yet the performance, at its root, is a primal scream from White America in defense of a social order fast eroding under strain from monumental forces of change.

And of course, Trump’s performance has real consequences: 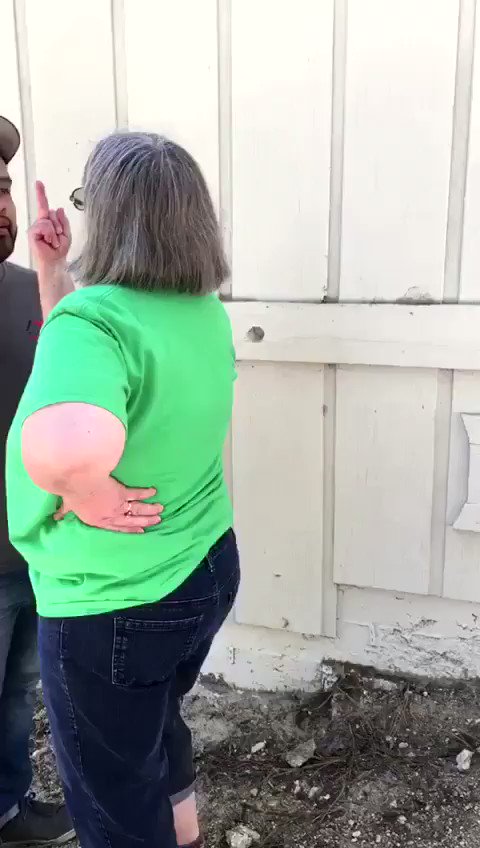 the realkenidrawoods: A friend, Esteban Guzman sent me this video of a racist white woman harassing him while out working with his mom.

“Why do you hate us?”
“Because you’re Mexicans.”
“We are honest people right here!”
“Haha..yeah.. rapists & animals.”

This reality show presidency is a uniquely American flavor of authoritarianism. Citizens from the national home of The Bachelor require only a thin veneer of reality to paper over the obvious money-grabbing deceit of the production in order to be taken in. This is our version of the authoritarian slide, in which The Leader rants about Jimmy Fallon and whether his wife got a facelift as he attacks the institutions of democracy that safeguard a free society. The entire production is carried out in complete bad faith, just like when Sarah Huckabee Sanders—who works for a man who invents demeaning nicknames for opponents, bragged about grabbing women “by the pussy,” and calls predominantly black and brown countries “shitholes”—insists we need civil discourse.

Rin Chupeco: So you shift the goalposts, and you enable the gaslighting, even if inadvertently. “Maybe if YOU hadn’t been so rude they wouldn’t have done that.”
Bullshit. You KNOW they’ll do it anyway because again, your goddamn status quo.

People invested in putting kids in cages don’t want your civility. They don’t want you to extend them the same courtesy they never had – and never wanted – from you. What they want is for you to retreat.

Replying to RinChupeco: People invested in putting kids in cages don’t want your civility. They don’t want you to extend them the same courtesy they never had – and never wanted – from you. What they want is for you to retreat.

Rin Chupeco: And every ground you grudgingly give, hoping that they’ll construe that as some good faith on your part, is only an incentive for them to push harder until you have no ground left. Then they’re going to tell you they’ve owned the land all along.

Chupeco’s whole thread is worth reading.

The president again suggested we should suspend due process for people captured at the border last night. He is creeping up the field, seizing first the shallow ground allotted to the most vulnerable among us. No amount of civil discourse is going to convince him to turn back, or persuade any of his supporters they have chosen the wrong path. It might be reality TV, but the supporters don’t want to know. They’re enjoying the show. The tax cuts might be reserved for the rich, but the attacks on the Other are all theirs to savor. Where will the next attack be, the next ground seized?