These 5 U.S. Towns Are Powered Entirely By Renewable Energy

“For too long, dirty fuels have jeopardized the health of our communities and put our children’s future at risk.” 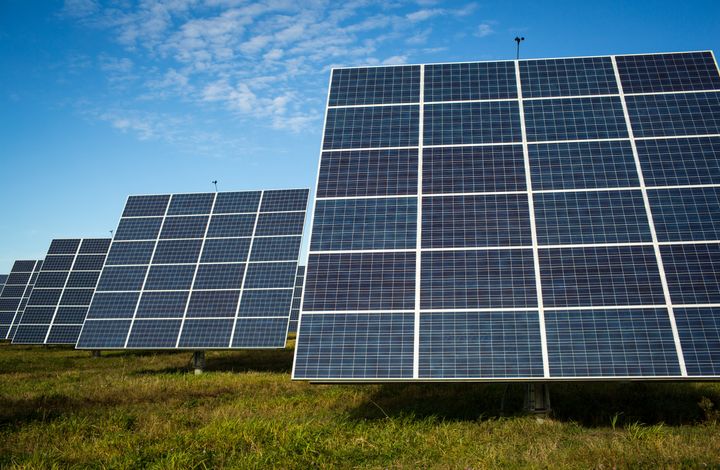 As President Donald Trump stands his ground on fossil fuels and works to roll back America’s climate and clean energy policies, cities around the country are committing to renewable energy ― and a handful already get all their power from sources such as wind and solar.

Since Trump was elected in November, the number of cities and towns that have committed to using only clean power sources has more than doubled, with 46 cities, including Atlanta and San Diego, promising a move in that direction, said Jodie Van Horn, campaign director for the Sierra Club’s Ready for 100 initiative. The campaign, which launched in 2016, is challenging 100 U.S. cities to commit to 100 percent clean energy.

“For too long, dirty fuels have jeopardized the health of our communities and put our children’s future at risk,” said Van Horn. “Now cities are not only our best offense, they’re also our best defense against Trump’s destructive policies.”

Cities play a key role in reducing carbon emissions, since they account for roughly 75 percent of global C0₂ emissions. It’s becoming easier for cities to clean their air as renewable energy continues to become more affordable. Once extremely costly, wind and solar will become the cheapest sources of electricity globally by 2030, according to research firm Bloomberg New Energy Finance.

While cities’ pursuit of 100 percent renewable energy is an “admirable goal,” the feasibility of every city achieving this target depends partly on the city government’s mandates and how they define what “100 percent renewable” means, said Michelle Davis, senior solar analyst at GTM Research.

Even the five towns that have already made the transition had different ideas about how to reach this target, Davis said. So one city’s path to 100 percent renewable energy could look very different from another’s.

“It’s one of the main areas of criticisms of most of these renewable energy targets and policies ― it is not consistent from state to state and city to city exactly how an entity claims they are meeting certain renewable energy goals,” Davis said.

Another challenge lies in who runs a city’s electric grid, she said. Some grids are run by municipal utilities, which means the city can decide whether it wants to integrate cleaner energy options. However, other cities have grids that are run by a statewide monopoly utility. These cities don’t have jurisdiction to make those decisions.

But as clean energy technologies continue to become more affordable and efficient, a 100 percent renewable power target should be within reach for most cities.

“Right now the cities that are doing it are ones where ‘the right conditions’ ― already a good energy mix, rich ― are in place, but this doesn’t need to persist,” said Dan Kammen, a professor of energy at the University of California, Berkeley. “Cities can all essentially source green energy and use offsets to fill gaps until more clean generation comes online.” 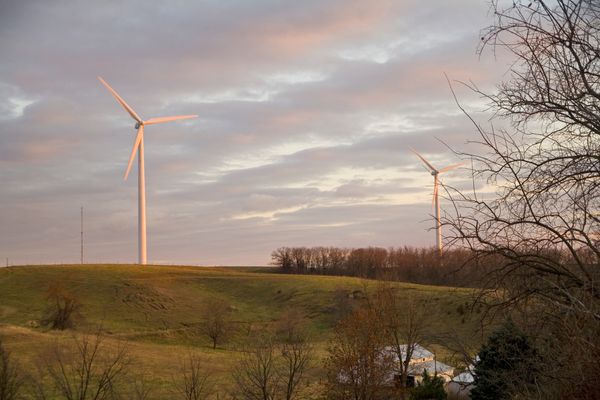 In 2008, Rock Port, a small farm town in northwest Missouri, became the first community in America to be powered entirely by wind energy. Four large wind turbines are connected to the power grid and provide Rock Port’s 1,300 residents with more electricity than they can use. 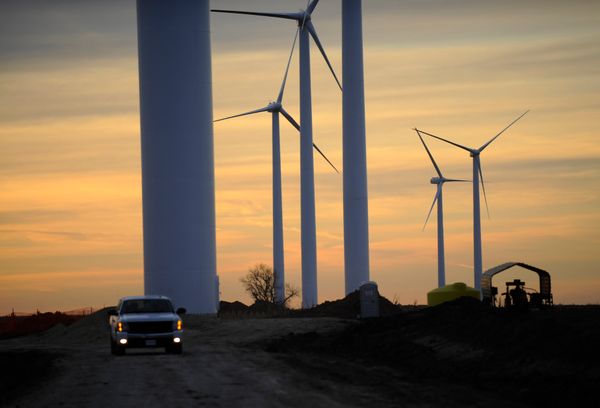 A rural hamlet in south-central Kansas, Greensburg is the little town that could. When a tornado devastated Greensburg in 2007, half the town’s population of 1,400 left. Those who stayed decided to rebuild their community with sustainability at its core. Greensburg met its 100 percent renewable energy goal in 2013, harnessing the very thing that decimated it: wind. They also used solar and geothermal technologies. The city buys its electricity from a 12.5 megawatt wind farm just outside of town, which provides more energy than the town needs, allowing it to sell the excess.

“The wind that destroyed Greensburg is also the wind that would make us energy sustainable,” said Mayor Bob Dixson.

A big hurdle was cost. Rebuilding with an eye on going green would set the town back 20 percent more than if it had stuck with conventional energy sources and building materials. But the investment is paying off in the long term: Greensburg now saves $200,000 annually in energy costs for its largest buildings, which are all LEED certified. 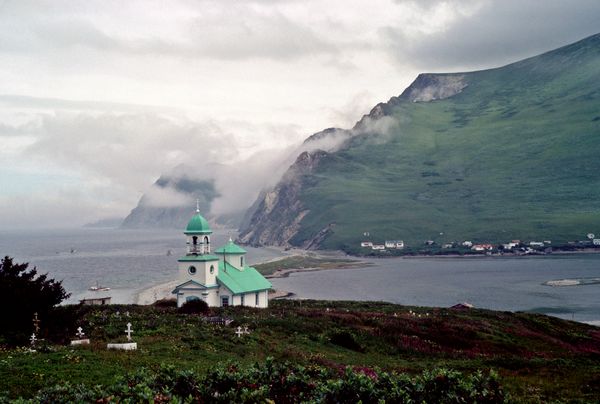 Since 2014, Kodiak Island in southern Alaska has been 99 percent powered by wind and hydro. A decade ago, Kodiak got the majority of its power from hydro, but it was still burning 2.8 million gallons of diesel a year to make up the energy shortfall, at a cost of $7 million annually. So the island’s electric utility company set an ambitious goal that 95 percent of the community’s power would come from renewable energy sources by 2020. Kodiak succeeded in meeting its target six years ahead of schedule. It was a steep learning curve. The city bought three 1.5 MW wind turbines in 2009, but installing them was a challenge. “There was not a lot of information back then on how to keep the grid frequency and voltage steady with an influx of variable wind power,” Kodiak Electric Association CEO Darron Scott told the nonprofit Rocky Mountain Institute. “It was uncharted territory.” 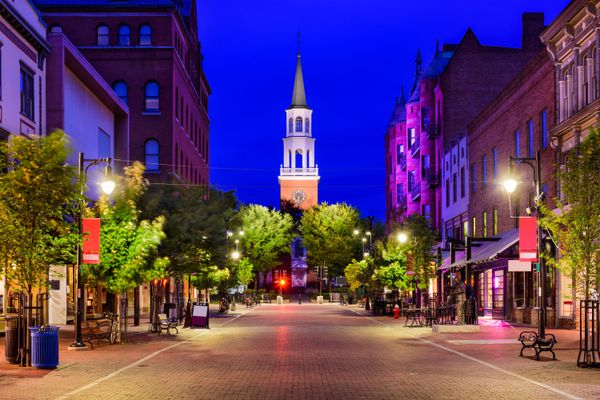 Vermont’s largest city, Burlington, achieved 100 percent renewable electricity in 2014 when it bought a hydropower facility on its outskirts. Burlington, which once relied heavily on coal, is now powered by a combination of energy from burning wood chips, wind, solar, landfill methane and hydropower. During times of high demand, Burlington might use a small amount of power that comes from fossil fuels, but it generates and trades enough renewable energy during the year to effectively cancel out that usage. The city estimates it will save $20 million over the next two decades. 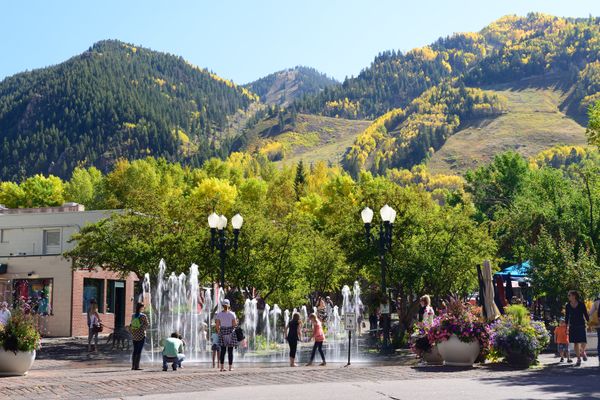 Aspen is a winter ski destination for the mega-rich, and it’s also one of the greenest towns in America. Ski resort towns have been hit hard in recent years as warmer winters mean less snow, so they’ve been ahead of the curve in tackling the effects of climate change. Aspen committed to a 100 percent renewable energy target in 2007 and achieved its goal in 2015 using primarily wind and hydropower. It wasn’t an easy road getting there. The city already had two hydroplants – built in the 1980s – to draw power from, and by 2014 it was using around 80 percent renewable energy. To close the final gap, Aspen decided to buy wind power from other states rather than resurrect a third hydroplant, which would be too costly.