The real cost of the Republican tax cuts

They’ll require spending cuts, or tax increases in other areas. Either could hurt many American families. 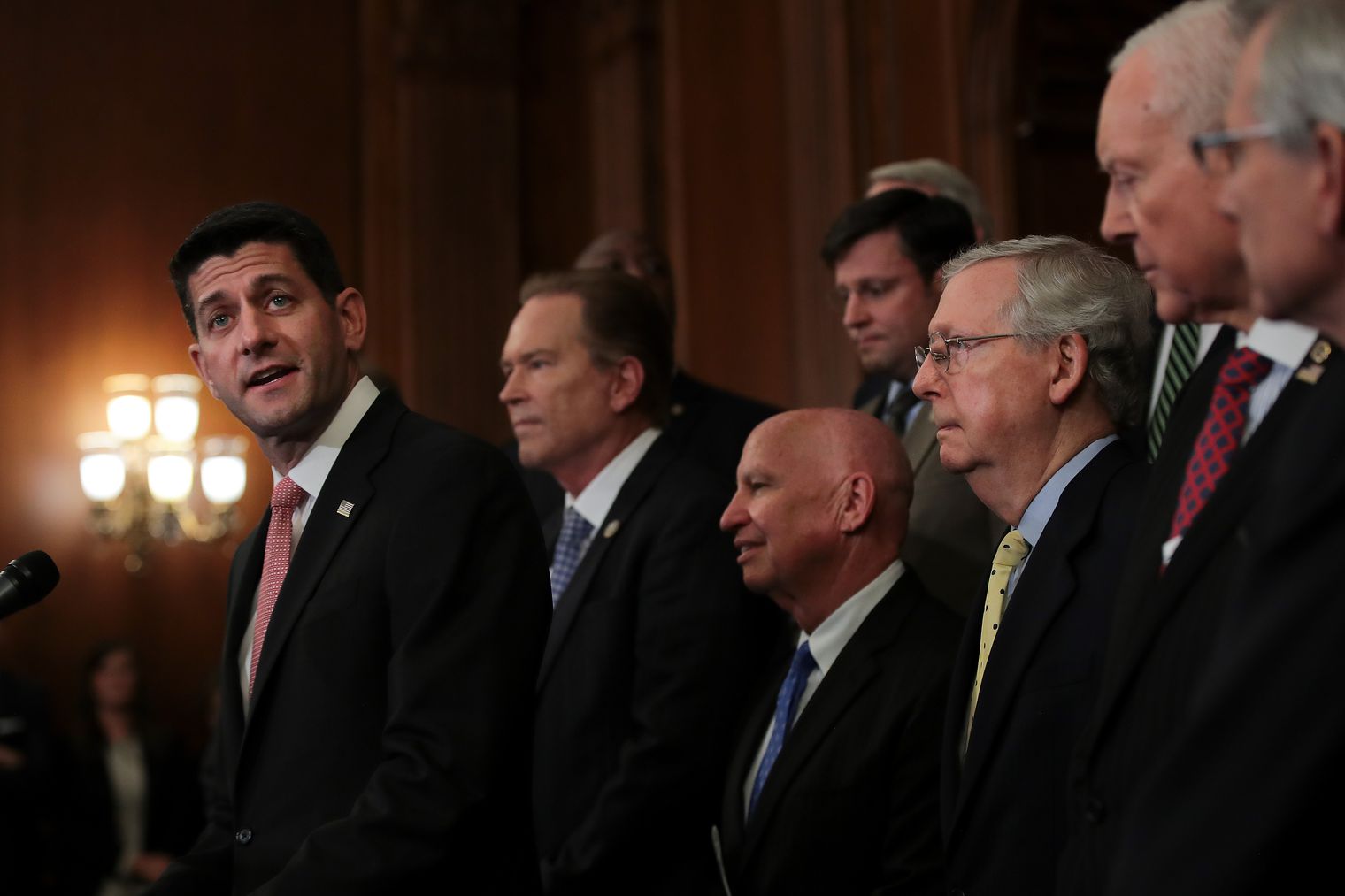 House Republicans are expected to unveil a draft tax bill this week, and a flurry of analysis will follow — from the congressional Joint Committee on Taxation as well as other organizations from across the political spectrum. But these analyses, whether positive or negative, will be profoundly incomplete.

That’s because the House Republican plan will itself be incomplete (notwithstanding what could easily be hundreds of pages of legislative language): It will fail to include any specific information about how the proposed tax cuts will ultimately be financed — whether that means future tax increases or spending cuts.

The primary stated goals of the tax plan are to raise economic growth and increase the after-tax incomes of middle-class households. But taking financing into account appropriately would show how unlikely it is that the plan will achieve those goals.

We expect, consistent with the reconciliation instructions in the budget resolution, that the draft bill will specify tax cuts that cost $1.5 trillion over the next decade according to the Joint Committee on Taxation’s conventional scoring. (That scoring ignores positive and negative macroeconomic feedback. It also does not reflect long-run costs that could result from one-time revenues or provisions that phase in or sunset.)

But even if one believes the plan will increase the overall size of the economy, spending cuts or tax increases will almost certainly still be required to pay for it. Analyses that do not account for those spending cuts or tax increases, whether they occur in the near term or in the longer term, obscure who will ultimately be hurt by them. Indeed, the very opportunity to obscure who will ultimately pay for the tax cuts likely explains why Congress pursues deficit-financed tax cuts more often than revenue-neutral tax reform or tax cuts accompanied by spending cuts.

A complete analysis of the tax plan including financing would most likely show that it would have a negative impact on many, and perhaps most, Americans.

The primary purpose of the tax system is to raise revenues. Therefore, evaluating changes in tax policy while ignoring the impact of the policy’s reduction in revenues makes no sense. It ignores the very reason taxes exist. Indeed, absent consideration of financing, simplistic arguments that a 20 percent corporate rate is better than a 35 percent rate — the Republicans’ current proposal — would also imply that a zero percent rate is better than a 20 percent rate.

And a negative 20 percent rate would be still better! Once you consider the need for financing, such simplistic arguments fall apart.

Whether and how tax cuts are financed makes all the difference in the world. Consider two alternatives. One kind of well-designed tax reform can maintain the same level of revenues and boost living standards. Such a reform would inevitably increase taxes on certain activities and decrease them on others.

This type of reform could generate a modest boost in the level of economic output in the long run and, if so, would temporarily increase the growth rate. It could also increase living standards (even with no change in output) by eliminating wasteful tax incentives that encourage people to over consume certain goods or services to maximize their tax benefits. Revenue-neutral reforms along these lines would almost certainly make some families better off and other families worse off. Who was hurt or helped would depend on the taxes that are changed.

But the situation now is that House Republicans appear likely to release a bill that will cut taxes on net with no indication of how the resulting deficits will be paid for. As a result, we’re left in the dark about the legislation’s ultimate impact.

Paying for tax cuts would likely leave most people worse off

Conventional distribution tables for tax cuts show most of the gross benefits of tax cuts but not the impact of paying for them. When the proposal increases deficits and does not specify how those deficits will be addressed, the possibilities range from cuts to programs to low-income households to increases in taxes for high-income households.

We give a rough estimate, here, of the impact that three different approaches to financing a large tax cut would have on families across the income distribution. This example is not intended to show the actual distribution of the forthcoming House bill, but is broadly illustrative of the trade-offs involved in financing a tax cut that offers larger benefits for higher-income families than for lower-income families, as it seems likely the bill from House Republicans will do.

Specifically, we use the Tax Policy Center’s analysis of the principles for tax reform released by the Trump administration in April. This analysis found that families in every income group would see lower taxes on average from the plan as proposed, albeit with much larger increases in after-tax incomes for higher-income households (see the blue bars in Figure 1, below).

But if the plan were financed by spending cuts or tax increases enacted at the same time, the distributional effects of the plan would change significantly. 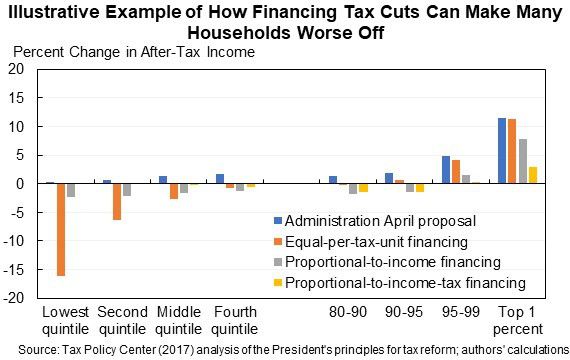 The analysis considers three scenarios for financing. In each scenario, families pay more in tax or receive less in benefits to offset the cost of the tax costs. (In practice, the total amount of financing would depend on the magnitude of the behavioral response to the tax cuts but that is ignored here.) The scenarios range from the relatively progressive, in which the cost assigned to each family is proportional to their current income tax liability (yellow bars), to the relatively regressive, in which the cost assigned to each family is the same dollar amount (orange bars). In the intermediate case, the cost is proportional to income (gray bars).

Families in the bottom 90 percent of the income distribution would be worse off on average under each of the three scenarios.

If anything, this chart understates just how regressive the total ultimate impact of the Republican plan could be. While an equal payment per family would be regressive, the reductions in Medicaid spending that House Republicans passed earlier this year — which would have a significant impact on lower-income households and very little on the highest-income households — would be even more so.

The analysis shown in Figure 1 assumes that financing is enacted at the same time as the tax cut. In practice, policymakers can delay the enactment of financing for either a short or extended period. In such a scenario, even larger spending cuts or tax increases in the future would replace the required cuts today. Such an approach would introduce disparities across time as well as income.

Enacting deficit-financed tax cuts allows policymakers to avoid the need to specify spending cuts or tax increases to pay for them and thus obscures the costs of the proposal. In addition, deferring the financing can itself reduce growth and reduce incomes even before the required financing policies are enacted. Those costs magnify the direct costs of any tax cuts.

Preliminary analyses by the Tax Policy Center of the Republicans framework (plus additional assumptions about unspecified elements of the plan from TPC) show the potential long-term consequences of deferring financing. In the short run, the TPC finds that the proposals would boost output. But over the longer run, the effects of mounting deficits and debt would turn the growth impact negative.

At the end of the first decade, the Tax Policy Center estimates that GDP will be 0.1 percent lower than it otherwise would have been, and at the end of two decades, it would be 0.4 percent lower. As a result, wages would likely fall over time, not rise (as recently claimed by the White House).

These results do not show the complete picture, however. The extent to which increased debt and deficits reduce GDP is moderated by an increase in domestic investment financed by foreigners. But this increase in foreign investment in the United States means an increased fraction of future GDP will need to be devoted to paying the return on that investment to those foreign investors. In other words, the gap between incomes generated by economic activity in the United States and incomes accruing to US nationals will grow. 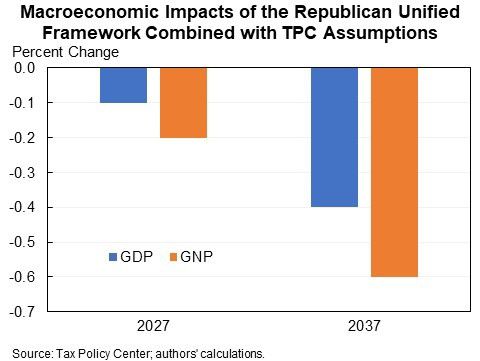 In circumstances like these, economists broadly agree that GNP is a better indicator of living standards for American households.

While the above analysis considers only the effects of additional debt, the spending cuts and tax increases ultimately enacted can themselves have negative effects on the economy. Indeed, classic economic arguments suggest that even when government spending is uncertain and varies over time, the most efficient tax system is one that attempts to maintain relatively constant tax rates.

The prevalence of such arguments is part of a larger issue with the way tax debates are often conducted, focusing on GDP and downplaying or ignoring the impact of financing.

In recent years, analysts have increasingly assumed, in their models, that deficits resulting from tax cuts are ultimately paid for by tax increases or spending cuts several decades in the future. Thus, they recognize that deficits will be produced (by, say, large tax cuts) but basically assume the deficits will be remedied somehow, without showing the direct effect of those remedies on American households either now or in the future.

This approach can be useful in the context of official analysis of proposed policies, but it obscures the true economic trade-offs. The promised gains from tax cuts in such cases — even when not eliminated as a result of years of increased borrowing — can amount to little more than borrowing heavily from future generations.

If we recognize the need for financing, a deficit-financed tax cut along the lines of the one House Republicans appear to be prepared to unveil is likely to be bad for the economy in the long run. It is likely to be particularly bad for working- and middle-class families.