The Latest Republican Tax Proposal Is the Dumbest Yet

Who are the tax wizards who came up with this one? 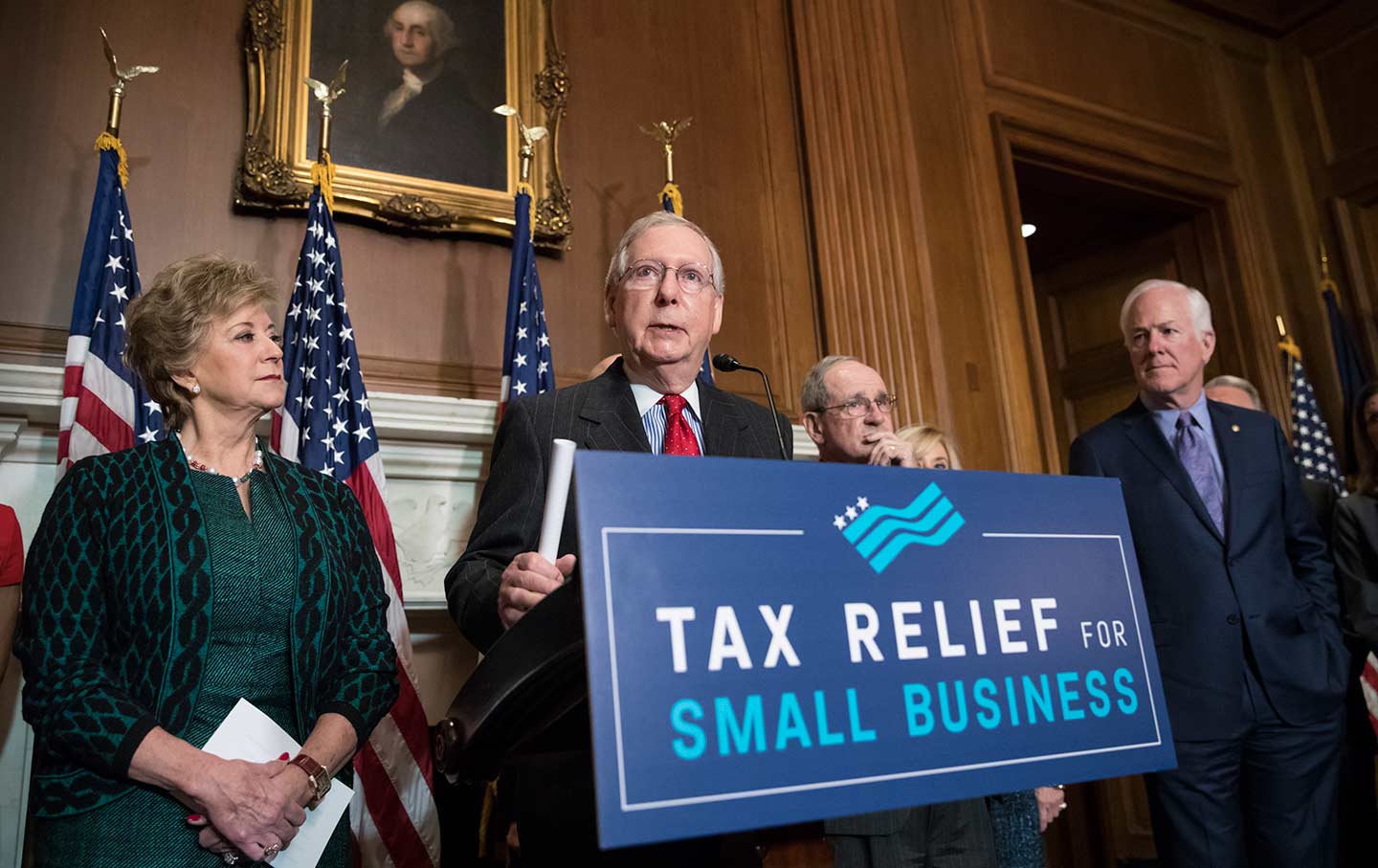 The negotiations over the Trump tax overhaul have moved from tragedy to farce. You could let monkeys bang on typewriters for several millennia and not come up with an idea as profoundly stupid as what Senate Republicans added Tuesday to appease one of their own members.

Before we get to that, let’s be clear that this astonishingly dumb notion is being scooped on top of a bill that is already economically illiterate. It’s painstakingly designed to punish people making under $75,000 a year and those who happen to live in states that didn’t vote for Donald Trump. It benefits wealthy investors and wealthy people who incorporate; basically being wealthy or being a member of the Trump family is the prerequisite. CEOs (“the most excited group out there,” according to the bill’s architect, Gary Cohn) have given away the game in earnings calls by admitting that the corporate tax cuts, easily the largest chunk of the bill, would flow out to shareholders in dividends and stock buybacks, rather than used to create jobs or raise wages. The bill is a gift to capital owners at workers’ expense.

But Senator Bob Corker and some of his colleagues, like Oklahoma’s James Lankford, are showing some residual concern about deficits. In response, GOP leaders initially limited the total cost of the tax cuts to $1.5 trillion over 10 years, and under Senate rules the bill could not raise the deficit at all after that. Republican leaders reached that number with a variety of gimmicks, like having the individual tax cuts expire after 2025 (while the corporate bounty lives on), and by assuming absurdly high economic gains from the cuts.

Corker called their bluff. He said that as long as everyone believes the tax cuts will super-charge economic growth, he wants a trigger that would automatically raise taxes if those rosy assumptions don’t come to pass. And because the bill can’t pass without the Corker bloc, Mitch McConnell gave it to him. This was enough to pass the package out of the Senate Budget Committee; Corker voted yes and was the margin of victory. Combined with some concessions to Susan Collins, the prospects for Senate passage look pretty decent.

We don’t have the specific details yet, and probably won’t until tomorrow. But just based on the concept, I can unreservedly say that this provision would make the name “Cut Cut Cut Act” seem like the work of Albert Einstein.

Creating automatic tax increases in the event of slow economic growth defies every macroeconomic impulse of the past century. It’s the kind of thinking that got us into the Great Depression, and more recently got places like Greece into a decade of suffering. When the economy slows down, government needs to serve as the spender of last resort by providing stimulus, either in the form of laying out funds or cutting taxes, or both. Either way, it would increase the deficit during a downturn, cycling that money through the economy to influence a recovery. Corker’s trigger would do the opposite. It would decrease the deficit if the economy didn’t reach certain performance targets. It would institute austerity during a time of slow growth. It would result in a tax cut bill almost certain to raise taxes at the worst possible moment.

And by the way, there are already triggers in the bill: The individual changes expire in 2025, which will raise taxes for much of the population. It’s impossible to forecast where the economy will be when that kicks in, but it’s at least plausible that the 2025 trigger and the Corker trigger will hit at the same time, when the economy is struggling, creating an almost guaranteed recession. The concept is, as Matt Yglesias calls it, an “automatic destabilizer.”

Now, none of this should matter to conservatives, not just because they don’t believe in Keynesian fiscal policy. They think it’s axiomatic that tax cuts pay for themselves with economic growth, so the triggers would never come into play. And that’s where the reaction to the triggers gets interesting. All the major conservative groups—the Koch-funded Americans for Prosperity, Grover Norquist’s American’s for Tax Reform, the US Chamber of Commerce—have come out sharply against the triggers. If anything has let the slip show about the intellectual bankruptcy of conservative ideas, this is it. They don’t actually believe their own bullshit about tax cuts and economic growth, at least not enough to gamble on it.

The bigger problem for Republicans is that members of the Senate seem as opposed to the triggers as the conservative K Street establishment. Chuck Grassley was sharply negative about the idea yesterday; so was Pennsylvania’s Pat Toomey and John Kennedy of Louisiana, until adding later that he was “keeping an open mind.” The banging from the Norquists and Kochs of the world is bound to flip some more votes.

There’s perhaps a solution of a pretend, convoluted trigger designed to never fire, which would somehow satisfy the Corker bloc while reassuring conservative anti-taxers. And to be sure, there’s a ton of momentum to get to yes here. Republicans have organized themselves, almost unilaterally, around tax cuts for the past several decades, and they appear determined not to let details or unpopularity get in the way. And if the deficit is a problem, that’s when they implement phase two: cut social spending to the bone, balancing the budget on the backs of the vulnerable while the rich get a windfall.

So maybe that’s the way out, and the Corker bloc folds with a fake trigger and a promise to eat the poor. But if anything close to the original concept makes it into law, Republicans will have accomplished a signature feat: They’ll have created a kind of economic Hamburger Helper that makes recessions into depressions, instantly.

Get unlimited access to The Nation for as little as 37 cents a week!