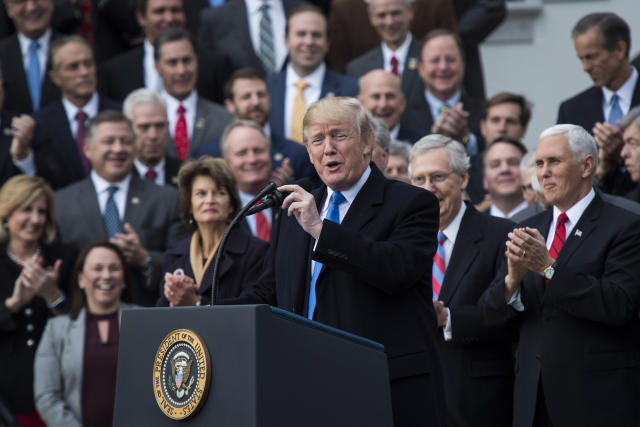 Did you have a happy Tax Day? Are you feeling grateful for the Republican tax cut?

Evidently, most American taxpayers are not.

In a sublime case of poetic justice, the so-called Tax Cut and Jobs Act is backfiring on the Republicans big time. Most voters are unimpressed, and Republicans themselves are ceasing to emphasize it in their campaign material.

In the March 13 special election for the Pennsylvania’s 18th Congressional District, where Democrat Conor Lamb narrowly beat Republican Rick Saccone, Republicans actually pulled ads that bragged about the tax act, because their polls showed that it was more of a target than an achievement.

Republican strategists who wanted President Donald Trump to emphasize the tax cut this spring were initially annoyed that he was talking about trade, immigration and Korea instead. Now they realize that Trump may be onto something.

Even better, Democrats are sensing that the tax issue can be turned against the Republicans in the 2018 and 2020 elections. This outcome is the result of Republican overreach, opportunism, and sheer greed.

Previous Republican tax cuts, under Ronald Reagan, and George W. Bush, were also tilted to the top, but made sure to include some real benefits for regular people. But this bill was so heavily skewed to the wealthy that most people won’t see any benefits at all in their paychecks.

In their excess, Republicans also managed to accomplish something ― for their opposition ― that has entirely eluded Democrats on tax politics since Reagan: total party unity. Reagan’s two big tax cuts in 1981 and 1986 peeled off lots of Democratic votes in Congress. Though the substance of the supply-side cuts was bogus, many Democrats figured that if the bill was going to pass anyway, they should share in the credit. The same thing happened with the Bush tax cuts of 2001 and 2003.

This time, however, the tax bill was both so extreme in its substance, and so purely partisan in the way it was enacted, that not a single Democrat in either the House or the Senate voted for it.

Republicans were counting on the sheer complexity of tax policy to put one over on the voters, but their con was much too easy to grasp.

By increasing the deficit to the tune of some $1.8 trillion over a decade, they were setting up demands for offsetting cuts in widely supported programs like Medicare and Social Security.  Those calls are already coming, from Republicans who belatedly and disingenuously discovered the tax bill’s impact on the deficit. And this presents a fat target for Democrats.

Some of the law’s specific measures, such as the $10,000 limit on the deductibility of state sales and income taxes and local property taxes, were intended to punish voters in blue states with relatively progressive taxes and decent public services, such as New York and California. But there are at least 20 endangered Republican House members in such states who will find out that this spiteful provision is impossible to defend.

When the bill passed, many Democrats were gun-shy about making this a prime election issue, on the premise that tax cuts are invariably popular. This one isn’t.

The tax law also gives Democrats the chance to ask: What else might we do with $1.8 trillion? For instance, a true invest-in-America program that rebuilds archaic infrastructure and creates lots of good jobs. Or substantial relief from crippling college debt. On multiple levels, the tax act invites debates that play to the strengths of Democrats.

Each claim in the Republican propaganda is phony. The growth stimulated by the bill will not enable the cuts to pay for themselves. The changes in the tax code are not increasing investment — mainly, they are promoting more corporate stock buybacks that artificially pump up share values and further enrich the rich.

Far from creating incentives to reverse off-shoring, the law actually enables corporations to pay a lower rate of tax on profits earned overseas. And despite a good deal of messaging by corporate allies of Trump claiming that worker raises and bonuses are the fruit of the tax cuts, the small number of pay increases are a pittance compared with the tax savings for companies.

Last week, headlines were made by the news that regulators had levied a $1 billion fine against Wells Fargo for chronic frauds against its customers. That $1 billion was less than a third of the money that Wells Fargo saves from the tax cut.

The ancient Greeks held that character is fate. And the tax act speaks volumes about the character of today’s Republican Party.

Republicans are supposed to be for fiscal balance. But when there is an opportunity to deliver trillion-dollar favors for corporations and the rich, deficits are no problem.

Republicans are allegedly for states’ rights. But this law greatly limits the ability of states to make their own choices about taxing and spending.

Republicans are supposed to be for economic efficiency. But this tax bill creates incentives for economically perverse activity, such as stock buybacks and sheer gimmicks such as “pass-through” entities where the point is not to improve the economy, but to merely to give the wealthy a break.

The law is such a political loser for Republicans, and the hypocrisy is so ripe, that one has to believe that Republicans sensed this was going to be their last chance for a long while to grab whatever they could. They made few concessions to political realism.

Now, they brace themselves for a long period in the political wilderness, knowing this law has helped to seal their fate.

Robert Kuttner is co-editor of The American Prospect and a professor at Brandeis University’s Heller School. His new book is: Can Democracy Survive Global Capitalism?