The GOP Tax Bill Is an Attempt to Destroy Government 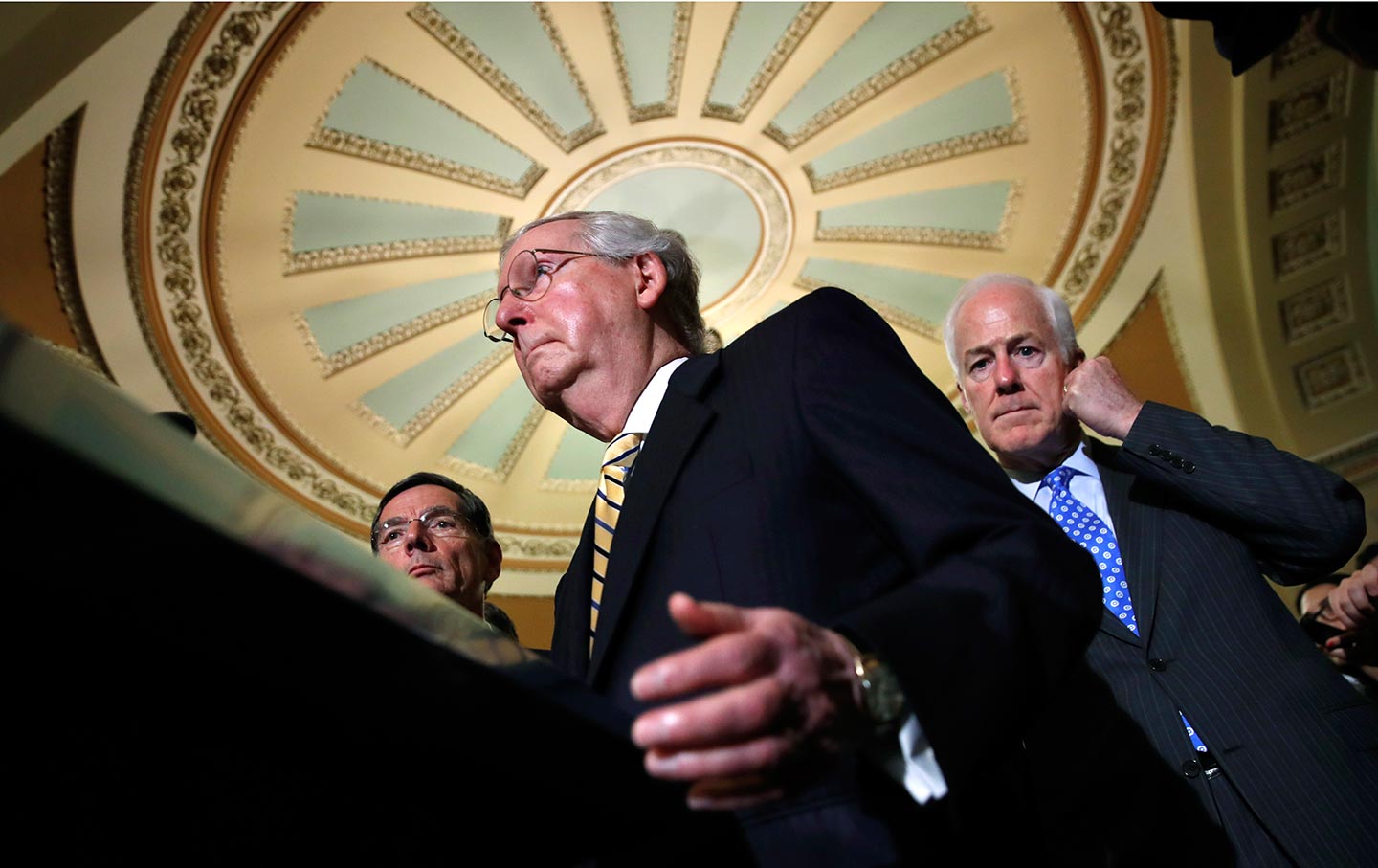 The House Republican tax bill has been introduced, packaged beautifully with lies. Now House Republicans will push to pass, in one week, a 500-page bill written in secret that transforms the tax code. Powerful special interests will spend millions for and against. Legions of lobbyists will fill congressional offices. Experts will duel over the effects. Trump is already boasting about “a great Christmas present” of the biggest tax cuts ever.

Republicans hope that the fog of competing claims will cover their tracks. In the midst of the frenzy, remember one thing: this entire project is utterly wrong-headed. Few politicians dare say it, but the reality is Americans are not overtaxed. They are under-served by their government.

American corporations and American citizens are not overtaxed, compared with other industrial nations. The greatest impediment to corporate competitiveness isn’t what corporations pay in taxes; it is an inefficient, outdated, and increasingly dangerous infrastructure. It is time wasted in traffic jams, slow trains, and overcrowded airports. Our broadband is slower and costs more than that of other leaders in the industrial world. Nine percent of all bridges are rated “structurally deficient” and 40 percent are over 50 years old. Our energy and water systems are aged and fragile. A bridge falls every other day in America. The American Society of Civil Engineers estimates that our increasingly decrepit infrastructure will cost about 2.5 million jobs and $7 trillion in sales by 2025. For businesses, the best use of public dollars isn’t tax cuts for the rich and big corporations but investments in rebuilding America.

Similarly, America’s workers are gouged far more by inadequate and wasteful public investment than by high taxes. We pay about two times as much per capita for health care—with worse results and leaving millions of people still not covered. The costs of educating kids—from pre-K to summer programs to soaring college tuitions and fees—rise far faster than stagnant wages. Crowded and pot-holed roads steal time and tax cars and tires. Flint is not alone in suffering from aging pipelines and poisonous water. For working people, the best use of public dollars is to invest in Medicare for All, tuition-free college, universal pre-K, and efficient roads and water systems.

Trump and Republicans want to sell tax cuts as key to growth and jobs, but this too is a con. In using public money to create jobs, the most authoritative assessment—made by Moody’s Mark Zandi, a former adviser to John McCain—is that investing in infrastructure would produce far more “bang for the buck” in jobs and growth than tax cuts would create. The money would be more likely to stay here, since 35 percent of corporate tax cuts would go to foreign investors or companies. The working people hired on public projects spend their wages, the rich less so. All this is particularly true now: Corporate profits are near-record levels, inequality is at record extremes, and interest rates are still low. Corporations don’t need tax breaks. They need customers. The rich will get more money under the GOP plan, but they’ve already captured so much of the nation’s income and wealth that even the conservative International Monetary Fund has warned that inequality has reached extremes that are an impediment to growth and jobs.

Republicans hypocritically will run up deficits and add a trillion or two to the national debt, but the real damage is that they will exacerbate what is now a crippling public-investment deficit. For all the alarms you’ll hear from Democrats and some Republicans in the next weeks, the budget deficits aren’t much of an economic concern. Inflation, if anything, is too low, and America bonds sell at remarkably low interest rates.

Budget deficits, however, are a political club. Once the tax cuts are passed, Republicans will return to hectoring about deficits and debt. Their budget documents already call for brutal cuts in Medicare, Medicaid, education, and the entire range of public services. As crippling as America’s public investment is today, passage of the Republican tax plan virtually insures that it will get far worse.

As Republicans rush to get this bill passed before it is read, the big lies will be exposed. The rich will clean up; some in the middle class—particularly those with large families—will pay more. Wealthy real-estate operators, investors, lawyers, and accountants will pocket most of the so-called small business “pass-through” tax break. Repatriation and territoriality will give corporations even more incentive to rig their books to report profits in tax havens abroad. But the specific outrages are neither as destructive nor as appalling as the entire project itself. By making it harder to address America’s crippling public-investment deficits, large tax cuts, if passed, will accelerate this country’s decline.

Robert L. Borosage is a leading progressive writer and activist.