The anti-Obama: Trump’s drive to destroy his predecessor’s legacy

From the Iran deal to TPP to climate change, ‘the whole thing that animates and unites his policy views is antipathy towards Obama’ 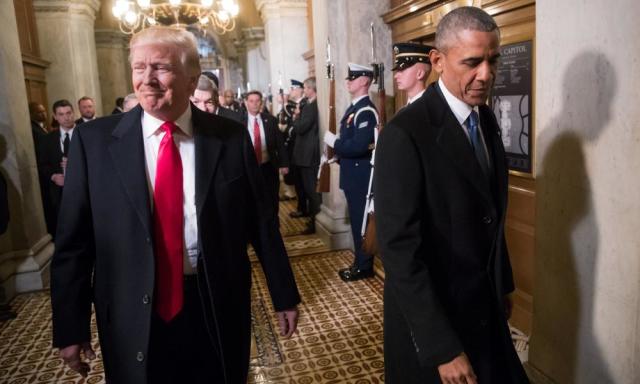 Trump’s decision was “misguided” and “a serious mistake”, Obama said, as his signature foreign policy achievement was tossed away.

It was just the latest example of Trump’s all-out assault on the Obama legacy. From climate change to criminal justice to international relations, rarely has one occupant of the Oval Office appeared so obsessed with taking a chainsaw to the work of another.

Tommy Vietor, a former national security council spokesman under Obama, told the Guardian: “The whole thing that animates and unites his policy views is antipathy towards Obama. It’s fucking pathetic. He’s a vindictive person so there is an element of this that is about sticking it to Obama. He knows, probably better than anyone, how to find all the Republican erogenous zones because he spent years whipping people into a frenzy and telling lies about Obama.”

From the start, it has been hard to imagine two men more different than Obama, 56, a mixed-race intellectual married to one woman for a quarter of a century, and Trump, 71, a white, thrice married businessman and reality TV star who has boasted about grabbing women’s private parts. One reads books voraciously; the other, it is said, barely reads at all. There were few reasons for their paths to ever cross except, perhaps, on a golf course, their one common passion.

But then came the 2011 White House Correspondents’ Association dinner. Trump, pushing a racially charged conspiracy theory questioning whether the president was born in America, was among the tuxedo-wearing guests. Obama mocked his nascent political ambitions without mercy. “Obviously, we all know about your credentials and breadth of experience,” he said, recalling an episode of Celebrity Apprentice in which the men’s cooking team fell short and Trump fired actor Gary Busey.

“And these are the kind of decisions that would keep me up at night,” the president continued to roars of laughter. “Well handled, sir. Well handled. Say what you will about Mr. Trump, he certainly would bring some change to the White House. Let’s see what we’ve got up there.”

The room erupted as Obama pointed to a Photo-shopped image of the then fantastical idea of a Trump White House, with three extra storeys, a giant “TRUMP” sign, a hotel, casino and golf course, a giant crystal chandelier, four gold columns and two women in swimwear drinking cocktails in the north lawn fountain.

Four years later, Adam Gopnik of the New Yorker magazine would recall: “Trump’s humiliation was as absolute, and as visible, as any I have ever seen: his head set in place, like a man in a pillory, he barely moved or altered his expression as wave after wave of laughter struck him … he sat perfectly still, chin tight, in locked, unmovable rage.”

Future historians may well ask: was this the moment that Trump resolved to storm the White House and tear down the Obama legacy?

For sure, from the day he formally launched his election campaign in June 2015, branding Mexican immigrants as criminals and rapists, he cast himself as the anti-Obama in style and substance. His act enraptured rightwing media and the Republican base, who saw Trump as a vessel into which they could pour their hopes and frustrations. David Litt, a former speechwriter for Obama, said this week: “It’s not only Trump who says, ‘If Obama is for it, I’m against it.’ This was the guiding philosophy for eight years of the Obama administration. Trump is a catalyst of the movement but he’s also a product of it.” 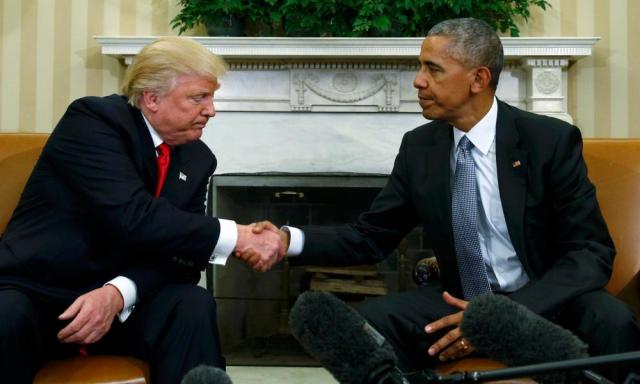 During his battle with Hillary Clinton, Trump duly promised to unravel Obama’s accomplishments. He described the Trans-Pacific Partnership (TPP), a proposed free trade deal with Asia, as “a rape of our country”. He said he is “not a great believer in manmade climate change” and vowed to cancel the Paris agreement. He called the Iran nuclear accord a “disaster” and “the worst deal ever negotiated” and warned that it could lead to a “nuclear holocaust”.

John Hudak, a senior fellow at the Brookings Institution think-tank in Washington, said: “The president ideologically disagrees with much of what President Obama accomplished but it’s important to remember these were campaign promises. It’s not out of nowhere. It’s what his voters wanted. Very little of what the president is doing is shocking, considering his campaign rhetoric.”

Soon after the stunning election outcome, Obama hosted Trump at the White House for about an hour and a half. Trump seemed surprised and a little impressed by the welcome, Obama appeared to be walking on eggshells.

But extraordinarily, since inauguration day, the men have not spoken. Hudak described this as “odd”, noting a past example: the first person Obama called after the killing of Osama Bin Laden was George W Bush.

“But it’s important to remember President Trump doesn’t like to hear ideas that he does not believe. If he called President Obama and said, ‘Can you talk me through this Iran deal?’ he would hear things that wouldn’t fit with that mindset. He could call Bill Clinton or George Bush, but why waste their time?”

At the recent funeral of former first lady Barbara Bush, the Bushes, Clintons and Obamas were joined by the first lady, Melania Trump, but the current president was conspicuously absent.

In the meantime, Trump is working through his Obama checklist at a rapid clip. He made good on his promises to withdraw from the TPP, Paris and Iran agreements. He partially reversed what he called a “terrible and misguided deal” with Cuba, reinstating some travel and commercial restrictions. He ordered the Pentagon to reverse an Obama-era policy that allowed transgender people to serve in the military.

Trump has also struck a radically different tone from the 44th president, expressing admiration for strongmen, confounding America’s longstanding allies and apparently viewing international relations through the prism of personal chemistry. The steady hand of “no drama Obama” has been replaced by chaos, unpredictability and Twitter diplomacy. 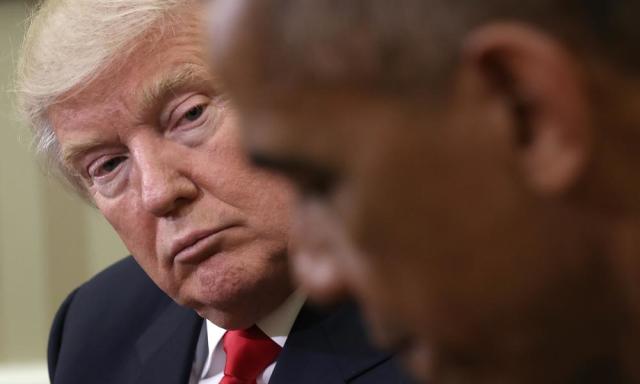 Donald Trump’s ‘only guiding principle seems to be to undo what Obama did’, says one Democratic strategist. Photo: Win McNamee/Getty Images

Domestically, his tone on abortion rights, gun control and race relations represents another 180-degree turn. He announced plans to scrap Deferred Action for Childhood Arrivals (Daca), a program created under Obama to allow people brought to the US illegally as children the temporary right to live in America. He has rolled back hundreds of government regulations in areas such as immigration, net neutrality and clean air and water.

Some reversals have gained less public attention but could have more lasting consequences. Whereas the Obama administration directed federal prosecutors to be less aggressive in charging non-violent drug offenders, Trump’s attorney general, Jeff Sessions, has reverted to a hard-line stance, raising the prospect of a resurgence in mass incarceration just as the prison population had begun to dip.

Lanhee Chen, a research fellow at the Hoover Institution in Stanford, California, said: “It’s not unusual for a president to want to do things differently from his predecessor. I will say the scope and ambition of Trump’s effort to do that is breathtaking. Whether it’s breathtakingly good or breathtakingly bad depends on your point of view.”

But there have been setbacks in the anti-Obama crusade. Trump was unable to steer Republicans to agree on a replacement for the Affordable Care Act, the flagship of Obama’s domestic program, though critics argue they have since done their best to sabotage it through a sweeping tax reform and other measures.

Some believe the effort failed because Trump has little grasp of or interest in policy details. Bob Shrum, a Democratic strategist, said: “His only guiding principle seems to be to undo what Obama did. His driving motivation seems to be his animosity towards Obama. We know he has no deep convictions of his own so Obama became his negative reference point.”