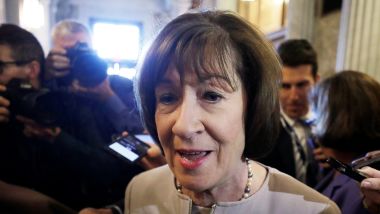 In her Senate floor speech on Friday, Sen. Susan Collins (R-Maine) resolutely defended Supreme Court nominee Brett Kavanaugh both on his judicial philosophies and against sexual assault allegations, sounding no different than ring-wing GOP senators like Orrin Hatch of Utah or John Cornyn of Texas.

She validated and rewarded the Trumpian tactics of Senate Judiciary Committee chairman Chuck Grassley (R-Iowa), who stacked the deck against Christine Blasey Ford and the others who alleged sexual misconduct by Kavanaugh. Despite his clear and repeated lies, Collins lauded Kavanaugh’s “forceful” testimony to the committee denying all of the accusations,

Even after that, some in the Beltway media over the weekend were still locked in time, describing Collins, as they always have, as a “moderate.” One New York Times reporter actually characterized her speech as “reasoned [and] carefully researched.”

But these descriptions were fewer and far between compared to the past. And in Maine, where it matters, a Portland Press Herald editorial called the speech anything but reasoned and careful, clearly identifying what was either naivete or political spin:

Even in areas where experts in the field raised warnings, Collins put her judgment ahead of theirs… Only Collins appears to believe that Kavanaugh considered Roe v. Wade “settled law” or that he was deeply committed to preserving precedent, something legal scholars say is inconsistent with the way the Supreme Court works. It makes precedent when it wants to, and it takes only five votes to do it.

Similar to the characterizations of the late Sen. John McCain (R-Ariz.) despite facts to the contrary, Collins has consistently been described as a “moderate” or a “maverick” by many establishment Washington political reporters, treating her with kid gloves in discussing possible political motivations.

Often in a Washington bubble themselves, they’ve allowed Collins to perpetuate a myth that she’s a principled bridge-builder who rises above partisanship, so much so that she believes it herself and thinks she’s invincible. Collins appears to have no idea what she’s about to face if she’s seeking re-election in 2020 (and she implied she will in a CNN appearance on Sunday defending her support for Kavanaugh), drunk on the standing ovation she received from Republicans on the Senate floor and the accolades that no doubt came in from President Donald Trump’s base all across the country.

Yes, she voted to protect funding for Planned Parenthood, voted to end the ban on gays serving openly in the military and has defended the environment. These high-profile votes, in a GOP caucus that is so extreme, allowed her to distinguish herself ― and allowed some in the Washington press to distinguish her ― as someone who was anything but right-wing.

But this was always simplistic. Collins voted with Senate Majority Leader Mitch McConnell (R-Ky.) and the White House almost 90 percent of the time in the first year of the Trump administration. Her much-heralded vote against Obamacare repeal was negated by her vote for the GOP tax bill. She insisted that in backing that latter bill she got a promise from McConnell that the Senate would consider several fixes to Obamacare ― pledges that never materialized.

Collins refused to support marriage equality as that debate heated up in Maine over the years and as LGBTQ activists came under vicious verbal assault by extremists in the GOP. She finally came out for marriage equality in 2014, two years after the state became one of the few in which marriage equality was achieved via a ballot measure. Thus, she never actually lifted a finger to help Mainers get equality.

She announced her evolution just in time for her re-election bid in 2014, having garnered the endorsement of the Human Rights Campaign, the largest national LGBTQ group. That backing, along with endorsements of her from abortion rights groups, helped her thwart her Democratic challenger.

Collins has since voted to confirm a constant stream of stridently anti-choice, anti-LGBTQ judges nominated to the federal courts by Trump.

That includes Kyle Duncan, confirmed to the Fifth Circuit Court of Appeals, who wrote the amicus brief for Louisiana and 14 other states to uphold same-sex marriage bans and fought to uphold transgender bathroom restrictions. It includes backing Steve Grasz for the Eighth Circuit Court of Appeals, who received a unanimous “unqualified” rating from the American Bar Association. He’d called Roe v. Wade “moral bankruptcy” and sat on the board of a group that promotes “conversion therapy” for LGBTQ minors.

Collins voted to confirm Neil Gorsuch to the Supreme Court, who, like Kavanaugh, promised her and the world that he respected precedent, even calling the Obergefell marriage equality ruling “absolutely settled law.” Four months after joining the court Gorsuch wrote a vigorous dissent inviting states to challenge Obergefell.

Kavanaugh ― who was staff secretary in George W. Bush’s White House while it promoted a federal amendment banning same-sex marriage ―  didn’t even go as far as Gorsuch in his hearings, simply saying that Obergefell is law and he “applies the law.” 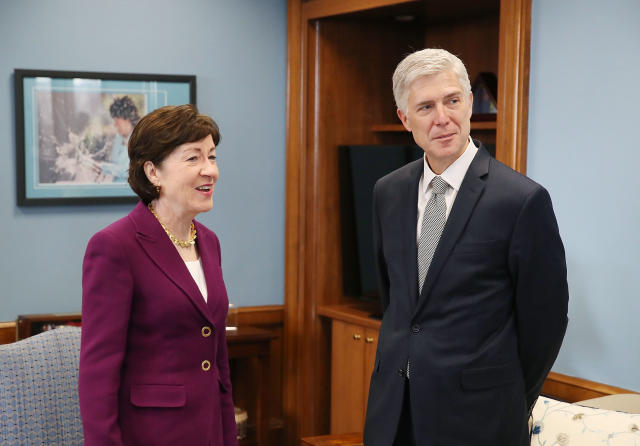 Collins’ party-line votes on district level and appeals court judges ― posts that are a top priority of McConnell’s ― haven’t gotten much media attention. That has only helped  Collins ― and McConnell ― continue to promote the myth of her as a moderate while she votes with the GOP’s right-wing on the issues that mattered most to it.

Whether she is trying to avert a 2020 primary from the right that Trump could lead against her ― he has already threatened Sen. Murkowski (R-Alaska) with political retribution for voting against Kavanaugh ― or she truly believed what she was saying, Collins this time couldn’t keep her political machinations under the radar. The allegations against Kavanaugh ― and the outrage over him they sparked ― placed a glaring spotlight on her vote.

Nor could Collins even get cover from her good friends in the Senate ―  Murkowski was joined by conservative Democratic Sen. Heidi Heitkamp of North Dakota in opposing Kavanaugh, even though the latter lawmaker conceded the vote could harm her re-election bid this year. So Collins stood as the sole so-called “moderate” woman in the Senate to have abandoned millions of women across the country and many others who will be hurt by the court’s likely lurch to the extreme right.

In this moment, the mask of moderation has been ripped off Collins. There will be those who say that she’s untouchable ― as they have said in the past ― and that Mainers who re-elected her before will do so again. They’ll tell you that she’ll have plenty of money from the Koch brothers and others, and she surely will.

But we’re in a different time, both nationally, with regard to the political energy of women and the Me Too movement, and in Maine. Already, people in Maine running a grassroots campaign have raised $3.5 million via crowdfunding to funnel to the Democratic opponent who takes on Collins in 2020. Several potential candidates have emerged in the past few days, as Democratic officials look to a deep pool of possible contenders in the state.

Polls in recent weeks found voters in Maine would be less likely to vote to re-elect Collins if she voted to confirm Kavanaugh. And in a Suffolk University poll in early August, she had only a 49 percent favorable rating, down from an impressive 67 percent in a Portland Press Herald 2016 poll.

University of New England political science professor Brian Duff told the Press Herald last week that voting against Kavanaugh “would be the more popular choice in Maine and easier for her to recover from, especially if she is able to vote for another conservative appointee later.” Two years, he said, is a long time in politics and “it’s hard to see a primary challenger emerging with any strength just because she voted ‘no’ on Brett Kavanaugh.”

Now that she’s voted yes, however, Collins can’t put her mask back on.

The Human Rights Campaign and several other national LGBTQ groups slammed her for backing Kavanaugh, as did Planned Parenthood and NARAL. It seems implausible that any of these groups would risk their members’ outrage by backing Collins in 2020.

And what does Collins do about Trump in her re-election year? In 2016, she announced in a scathing Op-Ed that she wasn’t voting for him that year, vocally distancing herself from his bigotry and recklessness as Hillary Clinton took Maine in the election. In 2020 Trump ― who tweeted accolades to Collins over the weekend ― presumably will be on the ballot with her. Will she dare endorse him ― or dare to not?

And as Kavanaugh rules with the far right of the court on issue after issue, as he undoubtedly will, Collins will sink even further, having taken full ownership of this Supreme Court nomination in the end.

Collins had a good gig, promoting herself as something she’s not. She’s now been fully exposed.