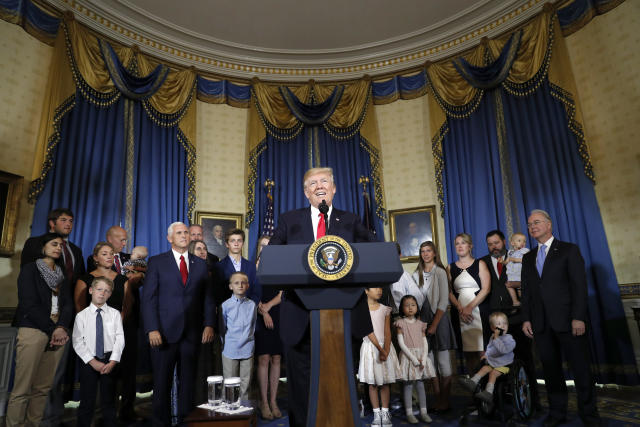 WASHINGTON (AP) — The Trump administration’s own actions are triggering double-digit premium increases on individual health insurance policies purchased by many consumers, a nonpartisan study has found.

The analysis released Thursday by the Kaiser Family Foundation found that mixed signals from President Donald Trump have created uncertainty “far outside the norm,” leading insurers to seek higher premium increases for 2018 than would otherwise have been the case.

The report comes with Republicans in Congress unable to deliver on their promise to repeal and replace the Obama-era Affordable Care Act. Trump, meanwhile, insists lawmakers try again. The president says “Obamacare” is collapsing, but he’s also threatened to give it a shove by stopping billions of dollars in payments to insurers. Some leading Republicans are considering fallback measures to stabilize markets.

Researchers from the Kaiser foundation looked at proposed premiums for a benchmark silver plan across major metropolitan areas in 20 states and Washington, D.C. Overall, they found that 15 of those cities will see increases of 10 percent or more next year.

The highest: a 49 percent jump in Wilmington, Delaware. The only decline: a 5 percent reduction in Providence, Rhode Island.

About 10 million people who buy policies through HealthCare.gov and state-run markets are potentially affected, as well as another 5 million to 7 million who purchase individual policies on their own.

Consumers in the government-sponsored markets can dodge the hit with the help of tax credits that most of them qualify for to help pay premiums. But off-marketplace customers pay full freight, and they face a second consecutive year of steep increases. Many are self-employed business owners.

The report also found that insurer participation in the ACA markets will be lower than at any time since “Obamacare” opened for business in 2014. The average: 4.6 insurers in the states studied, down from 5.7 insurers this year. In many cases insurers do not sell plans in every community in a state.

The researchers analyzed publicly available filings through which insurers justify their proposed premiums to state regulators. To be sure, insurers continue to struggle with sicker-than-expected customers and disappointing enrollment. And an ACA tax on the industry is expected to add 2 to 3 percentage points to premiums next year.

But on top of that, the researchers found the mixed signals from the administration account for some of the higher charges. Those could increase before enrollment starts Nov. 1.

“The vast majority of companies in states with detailed rate filings have included some language around the uncertainty, so it is likely that more companies will revise their premiums to reflect uncertainty in the absence of clear answers from Congress or the administration,” the report said. Once premiums are set, they’re generally in place for a whole year.

Insurers who assumed that Trump will make good on his threat to stop billions in payments to subsidize co-pays and deductibles requested additional premium increases ranging from 2 percent to 23 percent, the report found.

Insurers who assumed the IRS under Trump will not enforce unpopular fines on people who remain uninsured requested additional premium increases ranging from 1.2 percent to 20 percent.

“In many cases that means insurers are adding double-digit premium increases on top of what they otherwise would have requested,” said Cynthia Cox, a co-author of the Kaiser report. “In many cases, what we are seeing is an additional increase due to the political uncertainty.”

That doesn’t sound like what Trump promised when he assumed the presidency.

In a Washington Post interview ahead of his inauguration, Trump said, “We’re going to have insurance for everybody.”

“There was a philosophy in some circles that if you can’t pay for it, you don’t get it,” he added. “That’s not going to happen with us.”

People covered under Obama’s law “can expect to have great health care,” Trump said at the time. “It will be in a much simplified form. Much less expensive and much better.”

But the White House never produced the health care proposal Trump promised. And the GOP bills in Congress would have left millions more uninsured, a sobering side-effect that contributed to their political undoing.

The Trump administration sidestepped questions about its own role raised by the Kaiser study.

“The Trump administration is committed to repealing and replacing Obamacare and will always be focused on putting patients, families, and doctors, not Washington, in charge of health care,” Marre said in a statement.

The ongoing political turmoil for people who buy individual health insurance stands in sharp contrast to relative calm and stability for the majority of Americans insured through workplace plans. The cost of employer-sponsored coverage is expected to rise around 5 or 6 percent next year, benefits consultants say.