State Dept. Was Granted $120 Million to Fight Russian Meddling. It Has Spent $0. 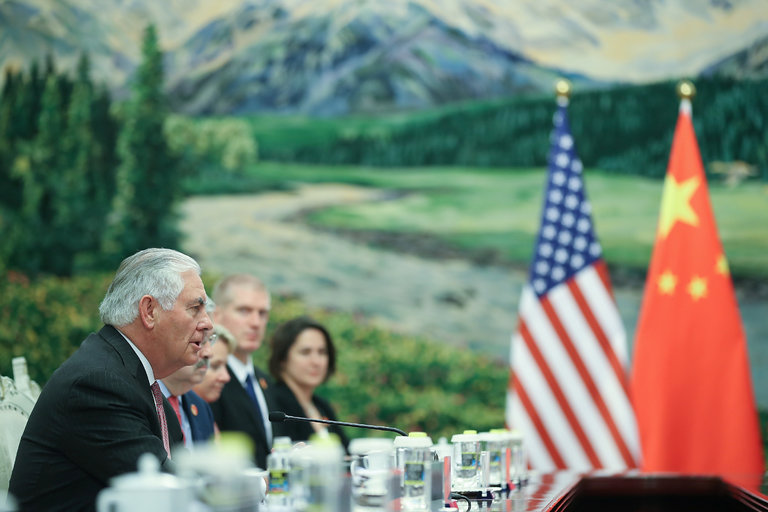 Rex W. Tillerson, the secretary of state, has voiced skepticism that the United States is capable of doing anything to counter Russian meddling. CreditPool photo by Lintao Zhang

WASHINGTON — As Russia’s virtual war against the United States continues unabated with the midterm elections approaching, the State Department has yet to spend any of the $120 million it has been allocated since late 2016 to counter foreign efforts to meddle in elections or sow distrust in democracy.

As a result, not one of the 23 analysts working in the department’s Global Engagement Center — which has been tasked with countering Moscow’s disinformation campaign — speaks Russian, and a department hiring freeze has hindered efforts to recruit the computer experts needed to track the Russian efforts.

The delay is just one symptom of the largely passive response to the Russian interference by President Trump, who has made little if any public effort to rally the nation to confront Moscow and defend democratic institutions. More broadly, the funding lag reflects a deep lack of confidence by Secretary of State Rex W. Tillerson in his department’s ability to execute its historically wide-ranging mission and spend its money wisely.

Mr. Tillerson has voiced skepticism that the United States is even capable of doing anything to counter the Russian threat.

“If it’s their intention to interfere, they’re going to find ways to do that,” Mr. Tillerson said in an interview last month with Fox News. “And we can take steps we can take, but this is something that once they decide they are going to do it, it’s very difficult to pre-empt it.”

The United States spends billions of dollars on secret cyber capabilities, but these weapons have proved largely ineffective against Russian efforts on Facebook, Twitter and elsewhere that simply amplify or distort divisive but genuine voices in the United States and elsewhere.

The role for the Global Engagement Center would be to assess Russian efforts and then set about amplifying a different set of voices to counter them, perhaps creating a network of anti-propaganda projects dispersed around the world, experts said.

“There are now thousands of former Russian journalists who have been exiled or fired who are doing counter-Russian stuff in exile who we could help,” said Richard Stengel, who as the under secretary for public diplomacy in the Obama administration had oversight of the Global Engagement Center.

Concerted campaigns to highlight the roles of Russian troll farms or Russian mercenaries in Ukraine and Syria could have a profound effect, Mr. Stengel said.

At the end of the Obama administration, Congress directed the Pentagon to send $60 million to the State Department so it could coordinate government-wide efforts, including those by the Defense Department and the Department of Homeland Security, to counter anti-democratic propaganda by Russia and China. This messaging effort is separate from other potential government actions like cyber-attacks.

Mr. Tillerson spent seven months trying to decide whether to spend any of the money. The State Department finally sent a request to the Defense Department on Sept. 18 to transfer the funds, but with just days left in the fiscal year, Pentagon officials decided that the State Department had lost its shot at the money.

With another $60 million available for the next fiscal year, the two departments dickered for another five months over how much the State Department could have.

After The New York Times, following a report on the issue by Politico in August, began asking about the delayed money, the State Department announced on Monday that the Pentagon had agreed to transfer $40 million for the effort, just a third of what was originally intended.

State Department officials say they expect to receive the money in April. Steve Goldstein, the under secretary for public diplomacy, said he would contribute $1 million from his own budget to “kick-start the initiative quickly.”

“This funding is critical to ensuring that we continue an aggressive response to malign influence and disinformation,” Mr. Goldstein said.

On Wednesday, Mark E. Mitchell, a top official in the Defense Department, said much wrangling remained before any of the promised $40 million is transferred to the State Department.

The delays have infuriated some members of Congress, which approved the funding transfer with bipartisan support.

“It is well past time that the State Department’s Global Engagement Center gets the resources Congress intended for it to effectively fight Kremlin-sponsored disinformation and other foreign propaganda operations,” Senator Robert Menendez of New Jersey, the top Democrat on the Senate Foreign Relations Committee, said on Wednesday.

Adele Ruppe, the center’s chief of staff, defended the administration’s broader efforts to counter Russian propaganda, pointing out that the State Department had provided $1.3 billion in assistance in 2017 to strengthen European resilience to Russian meddling. But that money was largely obligated during the Obama administration, and the Trump administration has proposed slashing that assistance by more than half for the coming year, to $527 million, and to $491 million for the next year.

While it waits for the funding transfer from the Pentagon, the center, which has a staff of around 60 people, including 23 contract analysts, will continue working on its original mission: countering jihadist and extremist propaganda.

Most of the center’s leaders are working in temporary assignments, a product of Mr. Tillerson’s halt in promotions. The analysts work in a warren of cubicles in the basement of a tired building that once housed the Office of Strategic Services, the World War II predecessor to the C.I.A.

The analysts are divided into five teams that largely work in four languages: Arabic, Urdu, French and Somali. The analysts said in interviews that they had notched some significant victories, including a video montage proving that the Islamic State had itself destroyed Al Nuri Grand Mosque in Mosul, Iraq, and a widely seen cartoon in French depicting the miserable life of an Islamic State fighter.

Still, these efforts are a small fraction of what Congress envisioned. A 2015 internal assessment found that the Islamic State had been far more nimble on social media than the United States had been. In May, Congress more than doubled the center’s budget, providing an additional $19 million over its earlier budget of $14 million. But by Jan. 1, the department had spent just $3.6 million of the additional $19 million, Mr. Goldstein said.

James K. Glassman, the under secretary for public diplomacy during the George W. Bush administration, said the center’s uncertain funding and temporary leadership reflected the administration’s lack of interest in countering either jihadist or Russian propaganda.

“They’ve got the vehicle to do this work in the center,” Mr. Glassman said. “What they don’t have is a secretary of state or a president who’s interested in doing this work.”

Mr. Tillerson is focusing his energies instead on drastically shrinking the department, leaving a significant part of its budget unused and hundreds of important decisions unmade.

Last year, the State Department spent just 79 percent of the money that Congress had authorized for the conduct of foreign affairs, the lowest such level in at least 15 years and well down from the 93 percent spent in the final year of the Obama administration, according to an analysis of data from the Office of Management and Budget.

Because of the hiring and promotion freezes that have left large sums unspent, as well as Mr. Tillerson’s refusal to delegate spending decisions, the department had a backlog of more than 1,400 official requests for Mr. Tillerson’s signoff at the end of last year, according to a former senior diplomat who left the department then.