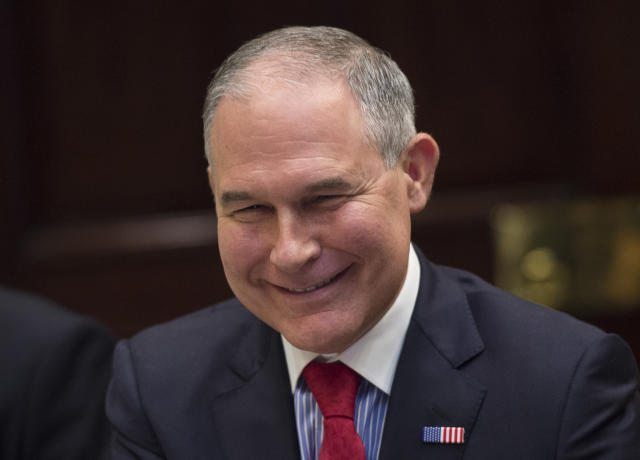 The Washington Post on Friday reported that the EPA purchased a dozen silver fountain pens from a jewelry store in Washington, D.C., featuring the agency’s seal and Pruitt’s signatures. The cost to taxpayers: $130 apiece.

The pens were part of a $3,230 order in August from Tiny Jewel Box that also reportedly included personalized journals.

“The cost of the Qty. 12 Fountain Pens will be around $1,560.00,” an account manager at the jewelry store wrote in an email to Millan Hupp, Pruitt’s head of scheduling and advance. “All the other items total cost is around $1,670.00 which these items are in process. Please advise.”

EPA spokesman Jahan Wilcox defended the pen purchase in a statement to the Washington Post, saying they “were made for the purpose of serving as gifts to the Administrator’s foreign counterparts and dignitaries upon his meeting with them.”

The expense comes as Pruitt faces a whirlwind of corruption accusations and ethical scandals. While pushing for sweeping budget cuts at the federal agency, Pruitt has been seemingly loose with the taxpayer’s dime.

In April, a government watchdog found that Pruitt broke the law when he spent $43,000 to install a soundproof phone booth in his office. Other questionable, high-end expenses include non-commercial and first-class airfare and an unprecedented security detail. Several high-ranking officials at the agency were reassigned, demoted or opted to leave after expressing concerns about pricey office furniture, as well as requests for a bulletproof SUV, a 20-person security detail and $100,000-a-month charter aircraft membership, as The New York Times reported in April.

Pruitt has largely pointed the finger at his own staff at the agency he runs.

“I’m having to answer questions about decisions that others made,” Pruitt said in an interview with the Washington Free Beacon this week. “And that’s not an excuse, it’s just reality.”