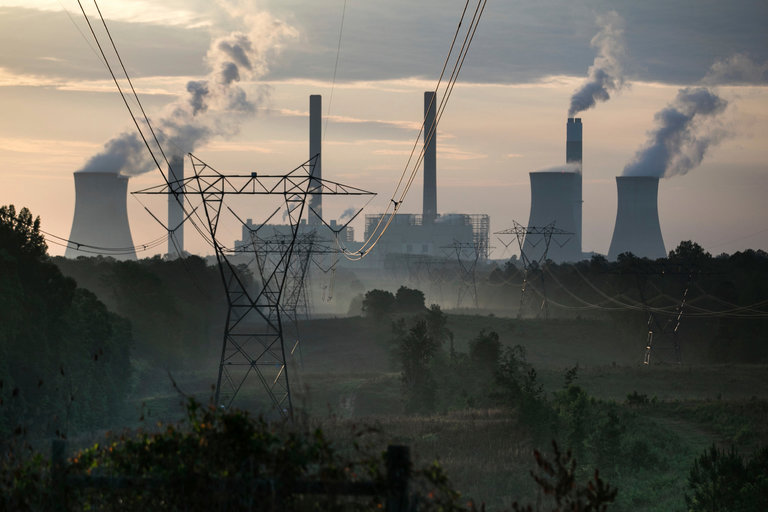 The coal-burning Plant Scherer in Juliette, Ga., is one of the top emitters of carbon dioxide in the United States. A draft report by government scientists concludes that Americans are feeling the effects of climate change right now. Credit Branden Camp/Associated Press

WASHINGTON — The average temperature in the United States has risen rapidly and drastically since 1980, and recent decades have been the warmest of the past 1,500 years, according to a sweeping federal climate change report awaiting approval by the Trump administration.

The draft report by scientists from 13 federal agencies, which has not yet been made public, concludes that Americans are feeling the effects of climate change right now. It directly contradicts claims by President Trump and members of his cabinet who say that the human contribution to climate change is uncertain, and that the ability to predict the effects is limited.

“Evidence for a changing climate abounds, from the top of the atmosphere to the depths of the oceans,” a draft of the report states. A copy of it was obtained by The New York Times.

The authors note that thousands of studies, conducted by tens of thousands of scientists, have documented climate changes on land and in the air. “Many lines of evidence demonstrate that human activities, especially emissions of greenhouse (heat-trapping) gases, are primarily responsible for recent observed climate change,” they wrote.

The report was completed this year and is a special science section of the National Climate Assessment, which is congressionally mandated every four years. The National Academy of Sciences has signed off on the draft report, and the authors are awaiting permission from the Trump administration to release it.

One government scientist who worked on the report, Katharine Hayhoe, a professor of political science at Texas Tech University, called the conclusions among “the most comprehensive climate science reports” to be published. Another scientist involved in the process, who spoke to The New York Times on the condition of anonymity, said he and others were concerned that it would be suppressed.

Read the Draft of the Climate Change Report

A draft report by scientists from 13 federal agencies, which has not yet been made public but was obtained by The New York Times, concludes that Americans are feeling the effects of climate change right now.

The White House and the Environmental Protection Agency did not immediately return calls or respond to emails requesting comment on Monday night.

The report concludes that even if humans immediately stopped emitting greenhouse gases into the atmosphere, the world would still feel at least an additional 0.50 degrees Fahrenheit (0.30 degrees Celsius) of warming over this century compared with today. The projected actual rise, scientists say, will be as much as 2 degrees Celsius.

Among the more significant of the study’s findings is that it is possible to attribute some extreme weather to climate change. The field known as “attribution science” has advanced rapidly in response to increasing risks from climate change.

The E.P.A. is one of 13 agencies that must approve the report by Aug. 18. The agency’s administrator, Scott Pruitt, has said he does not believe that carbon dioxide is a primary contributor to global warming.

“It’s a fraught situation,” said Michael Oppenheimer, a professor of geoscience and international affairs at Princeton University who was not involved in the study. “This is the first case in which an analysis of climate change of this scope has come up in the Trump administration, and scientists will be watching very carefully to see how they handle it.”

Scientists say they fear that the Trump administration could change or suppress the report. But those who challenge scientific data on human-caused climate change say they are equally worried that the draft report, as well as the larger National Climate Assessment, will be publicly released.

The National Climate Assessment “seems to be on autopilot” because of a lack of political direction, said Myron Ebell, a senior fellow at the Competitive Enterprise Institute.

The report says significant advances have been made linking human influence to individual extreme weather events since the last National Climate Assessment was produced in 2014. Still, it notes, crucial uncertainties remain.

It cites the European heat wave of 2003 and the record heat in Australia in 2013 as specific episodes where “relatively strong evidence” showed that a man-made factor contributed to the extreme weather.

In the United States, the authors write, the heat wave that broiled Texas in 2011 was more complicated. That year was Texas’ driest on record, and one study cited in the report said local weather variability and La Niña were the primary causes, with a “relatively small” warming contribution. Another study had concluded that climate change made extreme events 20 times more likely in Texas.

Based on those and other conflicting studies, the federal draft concludes that there was a medium likelihood that climate change played a role in the Texas heat wave. But it avoids assessing other individual weather events for their link to climate change. Generally, the report described linking recent major droughts in the United States to human activity as “complicated,” saying that while many droughts have been long and severe, they have not been unprecedented in the earth’s hydrologic natural variation.

Worldwide, the draft report finds it “extremely likely” that more than half of the global mean temperature increase since 1951 can be linked to human influence.

In the United States, the report concludes with “very high” confidence that the number and severity of cool nights have decreased since the 1960s, while the frequency and severity of warm days have increased. Extreme cold waves, it says, are less common since the 1980s, while extreme heat waves are more common.

Graphic: How Americans Think About Climate Change, in Six Maps

The study examines every corner of the United States and finds that all of it was touched by climate change. The average annual temperature in the United States will continue to rise, the authors write, making recent record-setting years “relatively common” in the near future. It projects increases of 5.0 to 7.5 degrees Fahrenheit (2.8 to 4.8 degrees Celsius) by the late century, depending on the level of future emissions.

It says the average annual rainfall across the country has increased by about 4 percent since the beginning of the 20th century. Parts of the West, Southwest and Southeast are drying up, while the Southern Plains and the Midwest are getting wetter.

With a medium degree of confidence, the authors linked the contribution of human-caused warming to rising temperatures over the Western and Northern United States. It found no direct link in the Southeast.

Additionally, the government scientists wrote that surface, air and ground temperatures in Alaska and the Arctic are rising at a frighteningly fast rate — twice as fast as the global average.

“It is very likely that the accelerated rate of Arctic warming will have a significant consequence for the United States due to accelerating land and sea ice melting that is driving changes in the ocean including sea level rise threatening our coastal communities,” the report says.

Human activity, the report goes on to say, is a primary culprit.

The study does not make policy recommendations, but it notes that stabilizing the global mean temperature increase to 2 degrees Celsius — what scientists have referred to as the guardrail beyond which changes become catastrophic — will require significant reductions in global levels of carbon dioxide.

Nearly 200 nations agreed as part of the Paris accords to limit or cut fossil fuel emissions. If countries make good on those promises, the federal report says, that will be a key step toward keeping global warming at manageable levels.

Mr. Trump announced this year that the United States would withdraw from the Paris agreement, saying the deal was bad for America.