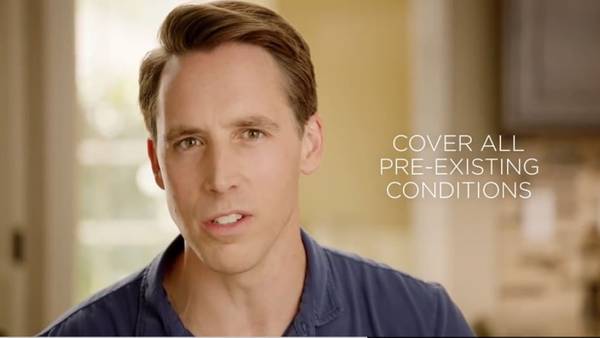 This is the second in our series of short videos analyzing the ads candidates are airing as the midterm elections approach. Today: preexisting conditions!

Because the video itself doesn’t engage in any fact-checking, I thought I’d clarify what’s false and what’s true. I’ll let President Trump sum up the position Republicans have now settled on:

Donald J. Trump: All Republicans support people with pre-existing conditions, and if they don’t, they will after I speak to them. I am in total support. Also, Democrats will destroy your Medicare, and I will keep it healthy and well!

That is simply a lie.

Here are the facts. Until the Affordable Care Act was passed in 2010, insurance companies routinely denied people coverage if they had a preexisting condition, or they said that they would cover you, but the insurance would not cover that condition or that part of your body. Or they would offer you coverage, but set the premiums so high that you couldn’t possibly afford them. The ACA outlawed that practice, mandating both “guaranteed issue” (they have to cover you) and “community rating” (everyone gets charged the same premium for the same plan regardless of whether they have a preexisting condition).

The ACA was opposed by every single Republican in both houses of Congress, and they immediately began holding votes to repeal the law and filing lawsuits asking the courts to strike it down. So there’s no confusion: If they succeed in what they’re trying to do, there would be no more protection for preexisting conditions.

Republicans are still saying that if they win back control of Congress, they’ll try again to repeal the ACA. And right now there’s a lawsuit in federal court filed by 20 Republican-run states seeking to have the entire law nullified. That lawsuit is supported by the Trump administration and pretty much every Republican.

In an act of truly awe-inspiring chutzpah, one of the people who brought that lawsuit, Missouri Attorney General Josh Hawley, is airing an ad in his run for Senate saying how committed he is to protecting those with preexisting conditions — a protection that would disappear if his lawsuit succeeds. It’s like if you found your neighbor smashing your car with a baseball bat, said, “What are you doing?!?” and he replied, “I would never do anything to harm your car.”

The best Republicans can do to justify this epic mendacity is to say that while they support taking away preexisting condition protection now, they’ll bring it back later with some future piece of legislation, so it’s no problem. Many of them point to one of a couple of bills floating around Congress, but like most of what Republicans do when it comes to health-care policy, those bills aren’t particularly serious and don’t do what they claim to do. For instance, one version would require insurers to cover you if you have a preexisting condition, but allow them not to cover you for that condition. It’s a scam.

Republicans are airing all these ads because they’re terrified about how effective this issue is turning out to be for Democrats. Even Trump seems to have figured it out. When one party collectively decides they’re all going to repeat an obvious lie, you know there’s something important going on.