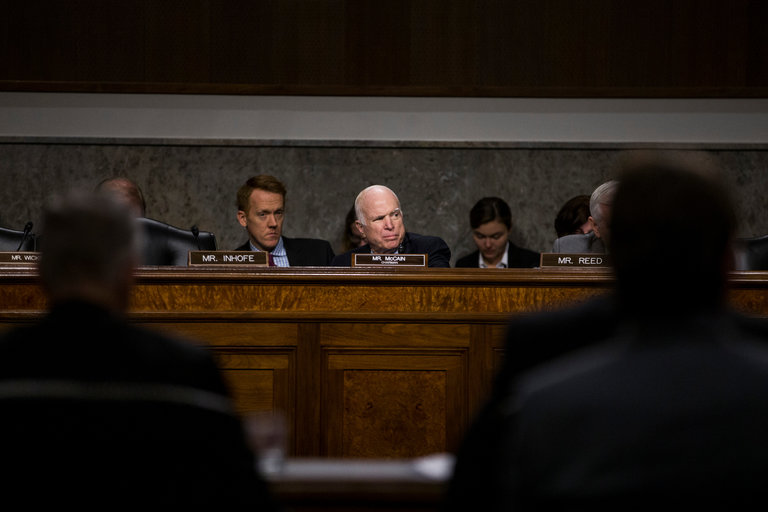 John McCain’s past lectures on the need for “regular order” in the Senate aren’t stopping him from backing a tax bill that’s being rushed to a vote. CreditZach Gibson for The New York Times

On Thursday morning, The New York Times revealed that Steven Mnuchin, the Treasury secretary, has been lying for months about Republican tax plans. Mnuchin has repeatedly claimed the existence of a Treasury report that — unlike every independent, nonpartisan assessment — found that these plans would pay for themselves, increasing growth and hence revenues so much that the deficit wouldn’t rise. But there is no such report, and never has been; Treasury staffers weren’t even asked to study the issue.

Also on Thursday, John McCain — who has delivered sanctimonious lectures on the importance of “regular order” in the Senate — declared his support for the G.O.P. tax bill. Remember, Senate leaders rushed this bill to the floor without holding any hearings or soliciting expert testimony (and tax policy is an area where you really, really need to hear from experts, lawyers and accountants even more than economists). In fact, at the time McCain declared his support, some key provisions were still secret, so they could be presented for a vote with no time for debate.

McCain declared that he had made his decision after “careful consideration.” Careful consideration of what? He didn’t even wait for an analysis of the bill’s economic impact by the Joint Committee on Taxation, Congress’s own scorekeeper — the only official assessment, since the Trump administration was, as I said, lying when it claimed to have its own analysis.

Later that day the joint committee delivered its predictable verdict: Like all other reasonable studies, its review found that the Senate bill would do little for U.S. economic growth, while directly hurting tens of millions of middle-class Americans, blowing up the deficit, lavishing benefits on the wealthy and opening up new frontiers for tax avoidance. But thanks to the moral collapse of McCain and other supposedly principled Republicans, at the time this column was filed the bill nonetheless seemed on track to clear the Senate.

But aren’t politicians always cynical? Not to this degree.

For one thing, there’s no precedent for this frantic rush to pass major legislation before anyone can figure out what’s in it or what it does. By way of comparison, the Affordable Care Act went through months of hearings before it was brought to the Senate floor; the full Senate then debated the bill for 25 straight days.

And there’s a world of difference between normal political spin — yes, all politicians try to emphasize the good aspects of their policies — and the outright lies that have marked every aspect of the selling of this thing.

In other words, this whole process involves a level of bad faith we haven’t seen in U.S. politics since the days when defenders of slavery physically assaulted their political foes on the Senate floor.

There are two further things worth pointing out about this moral rot.

First, it is not, at a fundamental level, a story about Donald Trump, bad as he is: The rot pervades the whole Republican Party. Some details of the legislation do look custom-designed to benefit the Trump family, but both the broad outlines and the fraudulence of the sales effort would have been pretty much the same under any Republican president.

Second, the rot is wide as well as deep.

I’m not just talking about Republican politicians, although the tax debate should dispel any remaining illusions about their motives: Just about every G.O.P. member of Congress, including the sainted John McCain, is willing to put partisan loyalty above principle, voting for what they have to know is terrible and irresponsible legislation. The point, however, is that the epidemic of bad faith extends well beyond elected or appointed officials.

It was remarkable, for example, to see a group of Republican-leaning economists with serious professional credentials put out an open letter clearly intended to lend aid and comfort to Mnuchinesque promises of miraculous growth. True, they didn’t explicitly claim that tax cuts would pay for themselves. But they didn’t clearly state that they wouldn’t, either, leaving Mnuchin free to claim — as they have to have known he would — that the letter vindicated his position.

And weasel-wording aside, it turns out that the letter misrepresented the research on which it was supposedly based. In other words, the rot of bad faith that has spread through the G.O.P. has also infected many intellectuals affiliated with the party. Not all: Some anti-Trump conservatives have stood by their principles. But so far they have had little influence.

So what will it take to clean out the rot? The answer, basically, is overwhelming electoral defeat. Until or unless that happens, there’s no telling how low the G.O.P. will sink.