Environmental Protection Agency Administrator Scott Pruitt’s protective detail broke down the door at the Capitol Hill condo where he was living, believing he was unconscious and unresponsive and needed rescue, in a bizarre incident last year that the EPA has for months refused to discuss, according to sources and police radio traffic obtained by ABC News.

The incident occurred in the late afternoon on March 29, 2017 at the Capitol Hill address Pruitt was renting, which was co-owned by the wife of a top energy lobbyist. A Capitol Police officer called 911 at the behest of Pruitt’s security detail, which had tried unsuccessfully to reach him by phone, and by banging on the building’s front door, according to police recordings obtained by ABC News.

“They say he’s unconscious at this time,” the 911 operator is told, according to the recordings. “I don’t know about the breathing portion.”

The protective detail then broke down the building’s glass-paneled front door and ascended two flights to Pruitt’s $50-a-night bedroom, where two sources tell ABC News he was found groggy, rising from a nap. It is unclear what led to the panic that caused the response. Pruitt declined medical attention, and a police report was never filed.

The EPA eventually agreed to reimburse the condo owner for the damage to the door, a source familiar with the arrangement told ABC News. EPA spokesman Jahan Wilcox did not respond to requests for information on the incident or the reimbursement payments.

The previously unreported incident occurred while Pruitt was living at Capitol Hill condo co-owned by the wife of a top energy lobbyist. Vicki Hart and her husband, lobbyist, J. Steven Hart, both confirmed the events, but neither would say how much the damage to the door cost to repair.

The EPA has since reimbursed Pruitt’s former landlord, Vicki Hart, for the cost of the door.

ABC News first reported Thursday that Pruitt had lived in the condo in 2017, during his first six months in Washington. The condo is in a prime location – less than a block from the U.S. Capitol complex – and other apartments in the building complex have rented for as much as $5,000-a-month, according to a source familiar with a neighboring lease.

The EPA allowed Bloomberg News to review copies of canceled checks that Pruitt paid to the condo owner. The news outlet reported that the checks show varying amounts paid on sporadic dates — not a traditional monthly “rent payment” of the same amount each month, according to Bloomberg. In all, Pruitt paid $6,100 over six months to the limited liability corporation for the Capitol Hill condo co-owned by Vicki Hart, whose husband J. Steven Hart is chairman of a top D.C. lobbying firm and who is registered to lobby for several major environmental and energy concerns.

Two sources told ABC News that Pruitt’s daughter also used the apartment in 2017 during her tenure as a White House summer intern.

“The rental agreement was with Scott Pruitt,” Vicki Hart told ABC News. “If other people were using the bedroom or the living quarters, I was never told, and I never gave him permission to do that.”

The EPA did not respond to requests for comment or clarification on the living arrangement with Pruitt’s daughter. McKenna Pruitt, now a law student, could not be reached by phone or email. 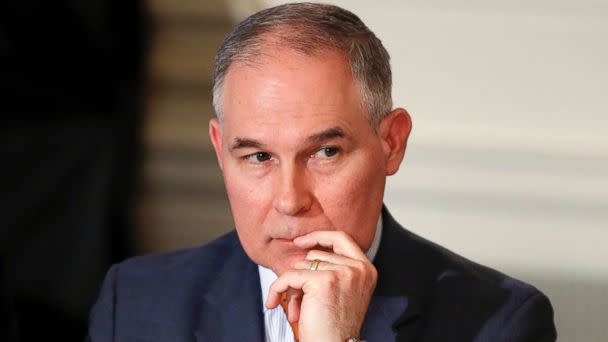 Wilcox released a statement from EPA Senior Counsel for Ethics Justina Fugh Friday, saying she did not “conclude that this is a prohibited gift at all. It was a routine business transaction and permissible even if from a personal friend.” Wilcox did not say when Fugh reviewed the matter or what led her to look into it.

Bryson Morgan, who is in private practice and served as Investigative Counsel at the U.S. House of Representatives Office of Congressional Ethics, said he thought it raised red flags.

“I think it certainly creates a perception problem, especially if Mr. Hart was seeking to influence the agency,” Morgan said.

Gift rules prohibit executive branch employees from accepting items of value, Morgan said in an interview prior to the EPA’s release of the details. In addition to traditional gifts, those rules apply to favorable terms on a lease.

“It’s not just if he is paying market rent,” Morgan said. “A short-term lease is expensive. Is he given the ability to end it any day? Is this an arrangement any other person could get on the open market? My assumption would be this situation does not involve the hallmarks of a specific fair market transaction,” he said in an interview conducted before the checks were revealed.

The new disclosure comes as Democrats in Congress are demanding that Pruitt disclose to them more details about his 2017 use of the Capitol Hill home. U.S. Rep. Don Beyer, a Virginia Democrat, called on Pruitt to resign over his failure to disclose the rental deal tied to an energy lobbyist.

“As he has done over and over again, he showed contempt for transparency, ethical guidelines, and the public interest,” Beyer said. “Pruitt must resign. If he refuses to do so he should be fired immediately.”

Hart is the chairman of lobbying firm Williams and Jensen that lobbies on EPA policies like the Clean Air Act, according to its website. The firm also lobbied on issues related to the export of liquefied natural gas and represented Cheniere Energy Inc., which owned the only active Liquid Natural Gas export plant in the United States at the time.

Pruitt traveled to Morocco last December and the EPA said in a press release that liquid natural gas exports were a topic of discussion during that trip.

Hart was registered with several companies to lobby on energy issues, but he told ABC News on Friday that he never contacted the EPA for clients.

The EPA did not respond to ABC News’ questions about whether Hart’s lobbying firm had any involvement in arranging meetings during Pruitt’s trip to Morocco.

Cheniere Energy spokeswoman Rachel Carmichel told ABC News the company ended its relationship with Hart’s firm in December 2017. The spokeswoman went on to say Cheniere was unaware of the relationship between Pruitt and the lobbyist and had not used Hart’s firm to have conversations with the EPA.

Craig Holman, an ethics specialist at Public Citizen, a non-partisan watchdog group, wrote to the EPA Inspector General Thursday to request an investigation into the rental arrangement. If the rental arrangement was anything other than a market rate deal, he wrote, “it would at least constitute a violation of the federal statutes and executive branch rules prohibiting gifts to covered officials from prohibited sources.”

“Since Administrator Pruitt is already involved in allegations of accepting gifts of travel, the question arises whether a sense of entitlement may have led him to violate the gift rules on this rental arrangement as well,” Holman wrote.

The head of the nonprofit watchdog group the Environmental Integrity Project and former EPA Director of Civil Enforcement Eric Shaffer called on the EPA’s inspector general and Congress to look into the issue.

“Does this explain why Pruitt flew to Morocco to pitch natural gas exports, which isn’t really an EPA concern?” Schaeffer wrote in a statement.

The EPA inspector general’s office is aware of the report, according to spokesman Jeff Lagda.

The agency’s inspector general is already looking into the cost of Pruitt’s travel and whether the agency followed all proper procedures.