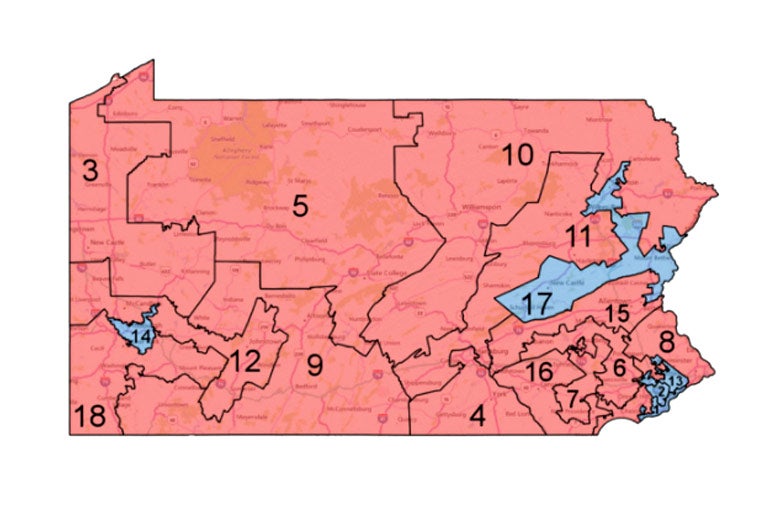 Pennsylvania Senate President pro tempore Joseph Scarnati announced on Wednesday that he will not comply with a state supreme court order to redraw Pennsylvania’s congressional lines. His open defiance of a court order raises the serious possibility that he may be held in contempt for brazenly violating the law.

The Pennsylvania Supreme Court struck down the state’s congressional map on Jan. 22, ruling that the egregiously partisan gerrymander ran afoul of the state constitution. It directed the GOP-controlled legislature to devise a new, nonpartisan map for the Democratic Gov. Tom Wolf’s approval, and noted that it would commission its own map if the elected branches could not come to an agreement. On Jan. 26, the court issued another order requesting data from the legislature “in anticipation of the possible eventuality that the General Assembly and the Governor do not enact a remedial congressional districting plan.” The court asked for “the current boundaries of all Pennsylvania municipalities and precincts” to help it draw a neutral map. It also noted that, if the legislature proposes its own map, it should include several reports proving that the new districts are fair and compact.

Through a letter from his lawyers, Scarnati flatly declared that he “will not be turning over any data identified in the Court’s Orders.” He pointed out that GOP legislators have already appealed the Pennsylvania Supreme Court’s ruling to the U.S. Supreme Court.
Scarnati explained that he is so certain of SCOTUS intervention that he has decided to reject the state supreme court’s order.

There are two problems with this strategy. First, Republicans’ appeal to the U.S. Supreme Court will probably fail. The Pennsylvania Supreme Court’s decision was rooted entirely in state law, which should insulate it from SCOTUS review. But even if SCOTUS chose to intervene, Republicans would likely lose. As ThinkProgress’ Ian Millhiser has explained, their radical theory would bar any court, state or federal, from placing constitutional limitations on congressional redistricting. Pennsylvania Republicans are essentially asking the U.S. Supreme Court to strip the judiciary of its authority to regulate any form of gerrymandering. That’s quite the long shot, unless SCOTUS is keen to overturn Marbury v. Madison.

Second, even if the Pennsylvania Supreme Court’s orders were of dubious constitutionality, Scarnati would be obligated to follow them until a higher court steps in. Lawmakers hold no special power to defy court orders with which they disagree as they await a higher court’s ruling. If they believe a court has misinterpreted the law, they may appeal its decision.
Scarnati has done exactly that. In the meantime, he must comply with his own state supreme court’s demands.

By failing to do so, Scarnati has put himself at real risk of contempt of court. It is remarkable—though not entirely surprising—to see a state legislator risk jail time in order to defend a flagrantly partisan gerrymander. Under the current map, Republicans have seized 13 out of Pennsylvania’s 18 congressional districts; a fairer map should hand Democrats at least three more seats. That might be enough for Democrats to win control of the House of Representatives in 2018. The stakes are sky high—but no political squabble can justify Scarnati’s decision to break the law.

You depend on Slate for sharp, distinctive coverage of the latest developments in politics and culture. Now we need to ask for your support.

Our work is more urgent than ever and is reaching more readers—but online advertising revenues don’t fully cover our costs, and we don’t have print subscribers to help keep us afloat. So we need your help. If you think Slate’s work matters, become a Slate Plus member. You’ll get exclusive members-only content and a suite of great benefits—and you’ll help secure Slate’s future.