Native Communities are Fighting for a More Inclusive Farm Bill

Farm policy has long ignored tribal governments and communities. A coalition of tribes aims to change that. 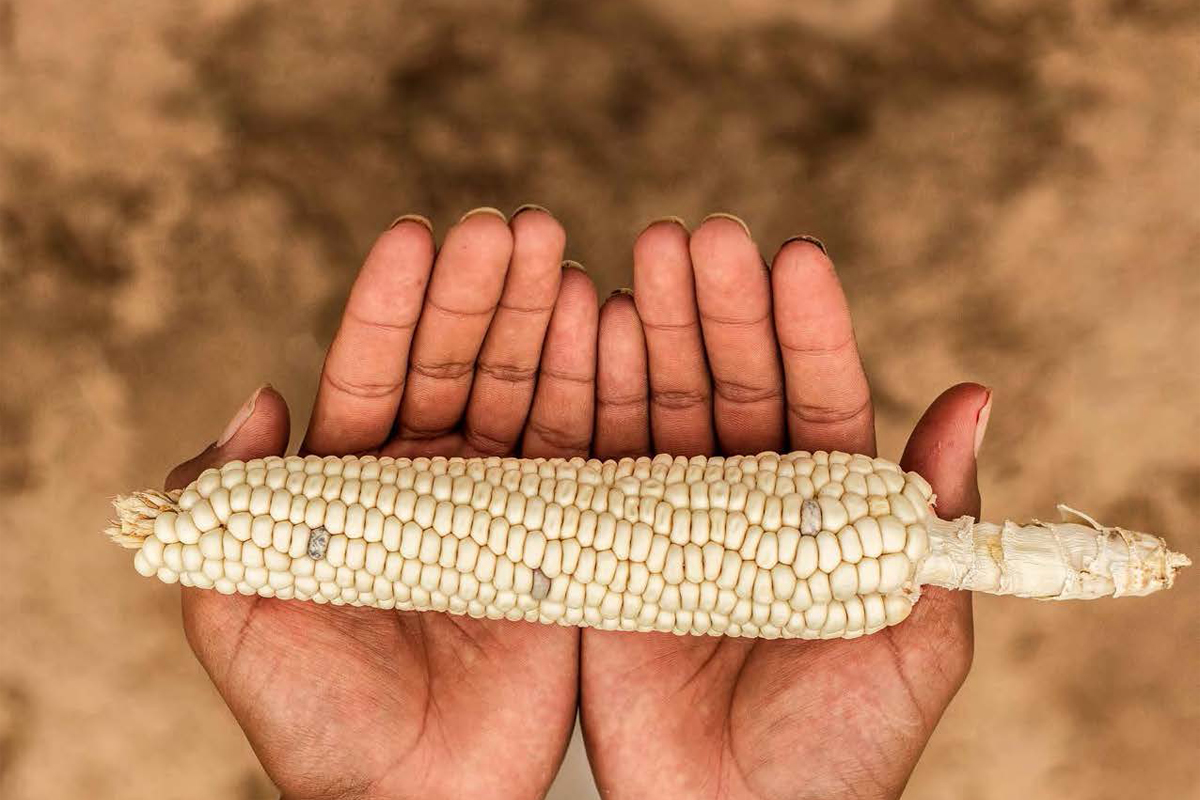 About 10 miles west from the Missouri border in the wooded, lush-green northeastern corner of Oklahoma sits the first tribally owned meat-processing plant in the country.

In addition to processing its own beef and bison, the 4,800-member Quapaw Tribe manages four greenhouses that grow fresh herbs and vegetables and a bee operation that both pollinates its plants and produces honey. The Quapaw people also roast their own coffee, which they package and sell, and earlier this year, they opened a craft brewery.

While participating in greater America’s enterprise system, the Quapaw also use some of what they produce to feed their own people and surrounding non-Native communities. In addition to supplying the steakhouse and restaurants at its casinos with freshly grown food, the tribe distributes bison to senior citizens and at the reservation’s daycare center. 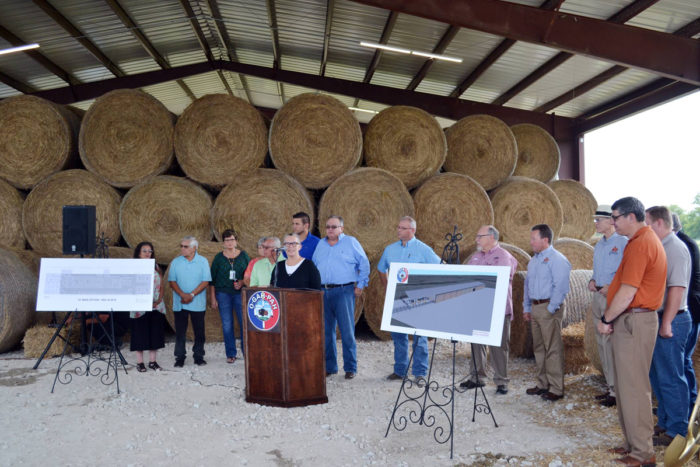 “Our contention is tribes are not sovereign unless they can feed themselves,” said Ross Racine, executive director of the Intertribal Agriculture Council. “But today, $3.3 billion of Native American agricultural products go into the commodity market. [By contrast,] Quapaw is eating what they are growing.”

Although agriculture continues to play a big role in Native life today, the Quapaw’s ability to feed themselves is nearly unique. While the overwhelming majority of farm operators in the U.S. are white, among farmers of color an estimated 30 percent are Native American or Alaska Native, and together they generate $3.3 billion in sales each year. But Native producers have little access to critically important resources such as credit, insurance, or loan programs, and that fact limits their ability to be fully autonomous.

Hoping to ensure that the voices of the nation’s original caretakers are heard, Native American groups have come together to advocate for more inclusion, greater funding, and extensive revisions in the upcoming farm bill, which will replace the soon-to-expire Agricultural Act of 2014. For nearly a year, the Native Farm Bill Coalition—made up of more than 22 tribes, tribal organizations, and nonprofits across the country—has been meeting to craft policy for the $489 billion omnibus bill, which oversees food assistance for more than 46 million low-income Americans, as well as food safety, agriculture insurance and losses, agricultural research, and rural housing and economic development.

“The farm bill holds the potential for tribal governments and producers to feed their own people in their own tribal food systems,” said Colby Duren, co-author of a report commissioned by the Native Farm Bill Coalition, during a recent webinar. “All of this will help spur economic development [and] build critical infrastructure, which is lacking in a lot of communities. [It will] be able to support traditional foods and … improve health, nutrition, food access and food security.”

Native communities’ lack of access to resources is due partly to the status of Native lands, which are held in trust by the U.S. government, making traditional landowner financing difficult to obtain. Without access to capital, much of the food produced on those lands is processed and consumed outside the community. Additionally, while non-Native communities have had access to various U.S. Department of Agriculture (USDA) programs since the 1940s, only in 1990 were the first Native producers eligible for these programs, Racine said.

The disadvantages Native Americans face when it comes to land and food access have roots that stretch back centuries. Starting in the late 1800s, the federal government used treaties to force many to convert to a western model of agrarianism and land management. The U.S. government assisted tribes in the transition—offering education, health care, and the right to self-govern, among other provisions—as a way to assimilate and settle Native people, who were seen as culturally inferior, in exchange for their land. Yet tribes already had their own traditional foraging and agricultural systems, and tribal land reduction and relocation destroyed many of those those foodways. 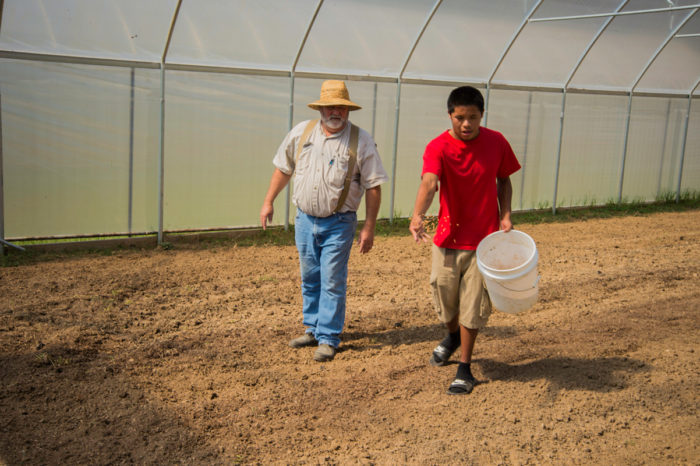 The effects were extremely detrimental to Native American wellbeing. With limits imposed on fishing, foraging, and hunting—and pushed out to rural areas with limited access to a commercial market—many tribal people became dependent on food distribution programs, which often contained processed food. As a result, Native Americans suffer some of the highest rates of diabetes and obesity in the country.

Last summer, the Native Farm Bill Coalition published Regaining Our Future, a report detailing their recommendations to better support Native people in each of the bill’s 12 titles, or sections. Their suggestions include extending credit and conservation programs, allocating research dollars to land grant tribal colleges, and providing access to international markets for certified Native American products, among others.

The coalition also calls for tribes to issue their own Supplemental Nutrition Assistance Program (SNAP) benefits, formerly called food stamps, which makes up 80 percent of the overall farm bill. (Currently, a majority of states manage the SNAP programs on Native American reservations.) Tribes would also like traditional and locally grown foods included in food distribution programs to help curb diabetes, heart disease, cancer, and other diet-related illnesses that Native Americans experience at higher rates. In some Native communities, one-quarter of members are participating in a federal food program.

Making Room at the Table 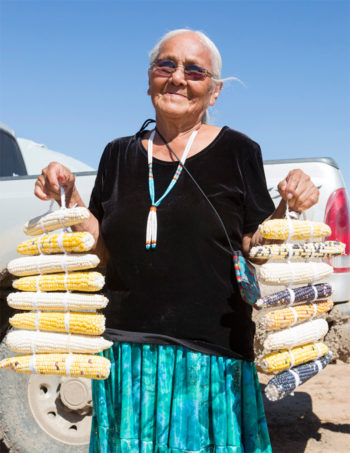 Photo courtesy of The Seeds of Native Health.

As Congress begins the process of reviewing the mammoth bill this spring, staffers with the office of Senator Tom Udall (D-NM) said bipartisan discussions on tribal recommendations that could be incorporated in the omnibus legislation or through supplemental bills are now taking place.

Already, Udall—who serves as vice chairman of the Senate Committee on Indian Affairs—and three other Democratic senators have introduced the Tribal Nutrition Improvement Act, which provides funding and adds federally recognized tribes to the list of governments authorized to administer federal food programs including the National School Lunch and School Breakfast programs, the Summer Food Service Program, and the Child and Adult Care Food Program. The legislation would allow tribes to directly administer school food programs without having to go through state agencies.

Though President Trump’s proposed 2019 budget calls for large cuts to American Indian programs, tribes are still hopeful that their voices may be heard, citing several gains in the last farm bill and support from congressional leaders familiar with tribal issues.

“For too long, Indian Country has been knocking at the door of each new farm bill negotiation, asking for a seat at the table as sovereign governments alongside states and counties,” Udall said. “This year, there is bipartisan support for including Indian Country in the farm bill negotiations and adding provisions to support Indian Country through sections like those on nutrition and economic development to name a few,” he continued, adding that he and Sen. John Hoeven (R-ND) have started discussions with tribes, the USDA, and Congress.

“I’m optimistic that we can continue to make progress,” Udall said. “We all need to come together to push the door open and make room at the table.”

Making progress on food sovereignty is of paramount importance to Racine and other Native leaders. “There has never been a society in the history of the world that has survived without the ability to feed itself,” said Racine during a recent Senate Committee on Indian Affairs hearing on agribusiness in Indian Country. “Agriculture is a tradition on our reservations, not the product.” 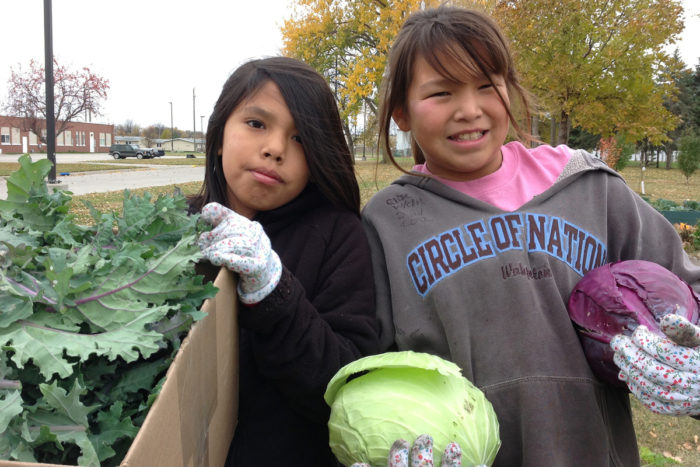 Students at Circle of Nations School in Wahpeton, ND gather vegetables that they grew in the school’s garden. (Photo courtesy of the USDA)

This article is part of a series published by Civil Eats in partnership with GATHER, a documentary chronicling the movement for Native American Food Sovereignty.