Those four words are the cost of our uniquely American “freedom.” 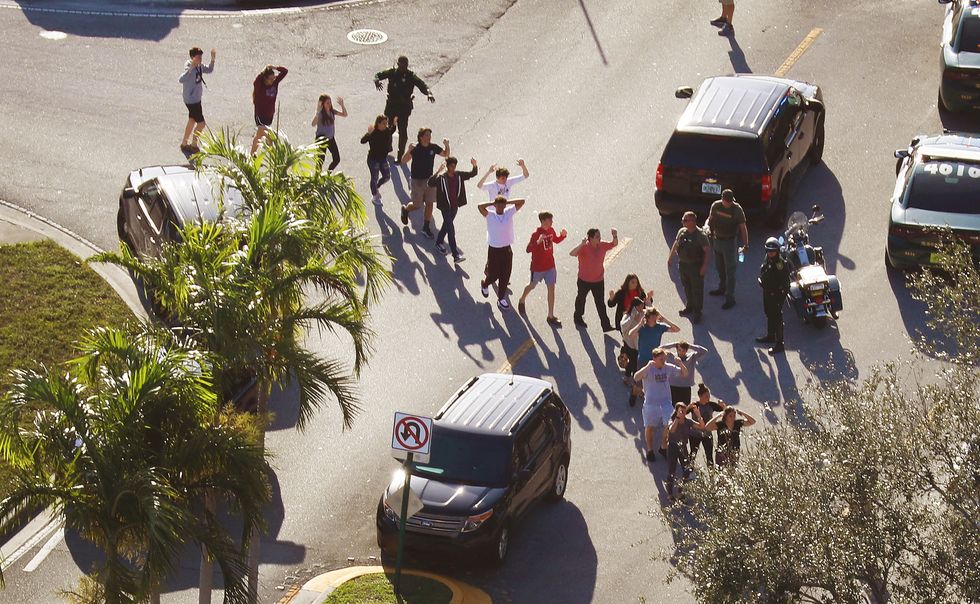 There was another unfortunate exercise of Second Amendment freedoms in an American high school on Wednesday. Seventeen students were killed. The shooter is in custody. This time the scene was Marjory Stoneman Douglas High School in Parkland, Florida. From CNN:

Nicole Baltzer, 18, said she was in trigonometry class about 10 minutes before the end of the school day when the fire alarm went off. As students evacuated, she heard six gunshots and everyone started running back inside the school, Baltzer told CNN’s Sara Ganim. “I heard so many gunshots, at least like six. They were very close,” Baltzer said. A police officer told her to close her eyes as she walked past a classroom with broken glass, telling her “there’s nothing good to see in there,” she said.

“We have been liberated. God bless, America,” Aidan tweeted after being evacuated from the building. “Love each other. You may never know when it may be the last day you meet someone.”

In a fcking school.

By now we know that the shooter was a troubled young man named Nikolas Cruz, who was expelled from the same school he shot up on Wednesday. From The Boston Globe via AP:

Cruz, 19, had been expelled from Marjory Stoneman Douglas High School for ‘‘disciplinary reasons,’’ Broward County Sheriff Scott Israel said, but he insisted he didn’t know the specifics. Math teacher Jim Gard told the Miami Herald that before Wednesday’s fatal shooting of 17 people, Cruz may have been identified as a potential threat – Gard believes the school had sent out an email warning teachers that Cruz shouldn’t be allowed on campus with a backpack. “There were problems with him last year threatening students, and I guess he was asked to leave campus,’’ Gard told the paper.

Unhappy there, Nikolas Cruz asked to move in with a friend’s family in northwest Broward. The family agreed, and Cruz moved in around Thanksgiving. According to the family’s lawyer, who did not identify them, they knew that Cruz owned the AR-15 but made him keep it locked up in a cabinet. He did have the key, however. Jim Lewis said the family is devastated and didn’t see this coming. They are cooperating with authorities, he said.

Good god. This guy was so freaking dangerous he was on the FBI’s goddamn radar. (The countdown has begun to the moment when the president* uses this fact to take another shot at the FBI for his own problems.) There is almost no way the Army or the Marines—or anybody’s army or marines, except, possibly, ISIL—would have handed an AR-15 to anybody with Cruz’s background. But he was able to own it as long as he locked it up at night in a cabinet to which he had the damn key. And it was sitting there, in the cabinet, to which he had the key, while he was posting threats on social media, bragging about killing animals, and shooting stuff with a pellet gun. His AR-15 was right there, locked in the cabinet, to which Nikolas had a key, until it wasn’t anymore.

Until he opened up and killed 17 people in the school from which he’d been expelled for being dangerously violent, Nikolas Cruz had broken no laws. That’s because this was Florida, and in Florida: a) you don’t need a permit to buy a gun or to register the weapon once you do; b) you don’t need a permit to carry a concealed rifle or shotgun, just a handgun, and it’s hard to believe the NRA let that one slip by; c) you can buy as many guns as you want; d) there are no regulations on military-style weapons or the amount of ammunition you can buy for them, and e) if you want to sell guns, you don’t need a license. The state does require a three-day waiting period, which clearly was effective in this case.

And, in case you were feeling relieved that you don’t live in an armed asylum like Florida, don’t get comfortable. Right now, in the Congress, there is pending something called the Concealed Carry Reciprocity Act. This would allow people from armed asylums like Florida to carry concealed weapons without penalty, and without notifying local authorities. In December, two months after a well-armed lunatic named Stephen Paddock shot 58 people to death in Las Vegas, this dog’s breakfast of a bill passed the House of Representatives, in which you cannot carry a gun, concealed or otherwise. It may not pass the Senate. It’s probably unconstitutional as hell. But it got 231 votes in the House. There are 231 members of Congress who thought this was a good idea, even in the wake of mass murder in Nevada.

Of course, I had to look up Stephen Paddock’s name because I’d forgotten it—just as, I suspect, I will have forgotten Nikolas Cruz’s name the next time someone exercises his Second Amendment freedoms in a school, because that’s just the way things are in this country. The entire argument from the National Rifle Association and the members of its terrorist cult can be boiled down to a contention that massacres like the one in Las Vegas and the one in Florida are simply the price one pays for constitutional liberties. This, of course, implies that the Founders, some of whom owned slaves, were also psychopaths.

Senator Chris Murphy, Democrat of Connecticut, took to the floor of the Senate almost immediately to excoriate the Congress for being accessories before and after the fact. As CNN reported, Murphy, of course, represents the state in which the Sandy Hook massacre was supposed to be a game changer on this issue. It was, and the game changed for the worse. On Wednesday, Murphy told the Senate.:

“This epidemic of mass slaughter, this scourge of school shooting after school shooting, it only happens here not because of coincidence, not because of bad luck, but as a consequence of our inaction. We are responsible for a level of mass atrocity that happens in this country with zero parallel anywhere else.”

In December, after Steven Paddock shot up the concert in Las Vegas, Murphy said this:

“This must stop. It is positively infuriating that my colleagues in Congress are so afraid of the gun industry that they pretend there aren’t public policy responses to this epidemic. There are, and the thoughts and prayers of politicians are cruelly hollow if they are paired with continued legislative indifference. It’s time for Congress to get off its ass and do something.”

A month before that, when Devin Kelley—Remember his name? I didn’t—killed 26 people at a church in Sutherland Springs, Texas. Murphy said:

“As my colleagues go to sleep tonight, they need to think about whether the political support of the gun industry is worth the blood that flows endlessly onto the floors of American churches, elementary schools, movie theaters, and city streets. Ask yourself – how can you claim that you respect human life while choosing fealty to weapons-makers over support for measures favored by the vast majority of your constituents.

This was the 18th such unfortunate exercise of Second Amendment freedoms in an American school this year. It was the eighth one in which people were killed. It is over five years since Adam Lanza—I remembered his name—slaughtered toddlers in Newtown, which was going to change everything. And it did, too. It demonstrated that, to our government, mass slaughter is just part of the price we pay for being free. It is now the second week of February and nobody is going to do a thing.

This post has been updated to correctly reflect the number of victims.