Livid Jimmy Kimmel turns up the heat on Sen. Cassidy for a second night

For the second night in a row Wednesday, late-night talk show host Jimmy Kimmel raged against a Senate bill meant to repeal Obamacare. It followed an impassioned critique of Sen. Bill Cassidy (R-La.) that captured media headlines just a day before.

Kimmel used the opening monologue of his Tuesday “Jimmy Kimmel Live” show to slam Cassidy and Sen. Lindsey Graham (R-S.C.), co-sponsors of a measure that would end the Affordable Care Act. The new bill, which Republican leaders are trying to ram through the Senate before the end of the month, would leave states with substantially less money to spend on health care, all but forcing them to cut programs so that literally millions of people would end up without insurance coverage. The bill would also allow states to waive rules that guarantee coverage to people with pre-existing conditions.

Kimmel accused Cassidy of lying to him during the senator’s appearance on his show in May, when the lawmaker pledged that no family would be denied medical care because they couldn’t afford it. “This guy, Bill Cassidy, just lied to my face,” the host said.

Following Tuesday’s monologue, Cassidy responded by saying he was “sorry” Kimmel didn’t understand the legislation and made wildly misleading claims about the contents of the bill. The host fired back just hours later.

“Could it be, Sen. Cassidy, that the problem is that I do understand and you got caught with your G-O-Penis out. Is that possible?” Kimmel said.

The host also took aim at Fox News’ Brian Kilmeade, who lambasted Kimmel on Wednesday as one of the Hollywood elite “pushing their politics on the rest of the country.”

“This is a guy, Brian Kilmeade, who, whenever I see him, kisses my ass like a little boy meeting Batman,” Kimmel said. “Oh, he’s such a fan. … He follows me on Twitter. He asked me to write a blurb for his book, which I did. I don’t get anything out of this, Brian, you phony little creep. Oh, I’ll pound you when I see you.”

He also lobbed hits at New Jersey Gov. Chris Christie, President Donald Trump and threw a light jab at Graham, although he said he’d hold off because “he’s one of the few Republicans who stands up” to the president.

Once again, Kimmel ended the segment by urging viewers to call their elected officials, pointing to a story in The New York Times that found Sen. Susan Collins (R-Maine) hadn’t received an increased number of calls over the new bill after his Tuesday segment.

“This is why things like this keep happening, because we don’t do anything about them,” Kimmel said. “So please stop texting for five seconds and make a phone call. Especially call these senators … It really does make a difference.” 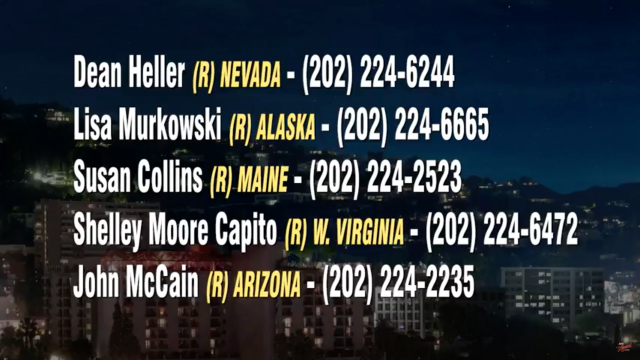