Immanuel Christian is not unusual. Too many religious schools at all levels regulate the personal conduct of their employees and students, restrict the books teachers can assign or students can read, and demand fealty to narrow constructions of religious identity, while enshrining bigotry into their bylaws.

Vice President Mike Pence says that criticizing institutions that discriminate like this is anti-Christian. I say that these schools are not only anti-American, in that they exclude so many Americans, but are also not in the best educational interests of the students who attend them.

For too many other institutions, faith provides the material to build a defensive wall rather than a strong foundation.

There are about 27,000 religious private K-12 schools in the United States and over 1,000 religious colleges and universities. Many of these institutions are inclusive, welcome, places. I should know, as I taught at Dominican University, a Catholic institution in the Chicago area, for over 10 years. I only left so I could raise my kids in Minnesota. For Dominican, and for thousands of institutions like it, faith traditions provide a rock of identity on which to stand and welcome the world with confidence.

As a secular Jew, I felt at home at Dominican. As an institution, it knew what it was and hoped I would share in the mission to make a “more just and humane world.” My Muslim and queer colleagues reported similar feelings of inclusion, and I don’t think Dominican is atypical in this regard. From kindergarten to graduate school, it’s possible to attend or work at a religious institution of learning that takes faith seriously without endorsing exclusion or bigotry.

Alas, for too many other institutions, faith provides the material to build a defensive wall rather than a strong foundation. Karen Pence’s new employer, Immanuel Christian, is one of many examples at the secondary level. I’ve been tracking similar issues at the collegiate level. 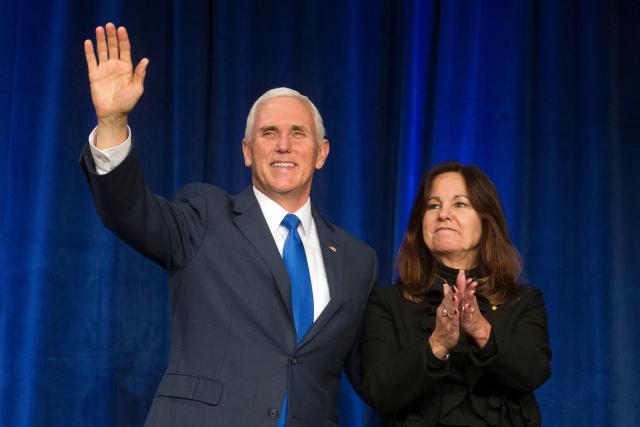 There are 139 colleges that exempt themselves from following Title IX rules against discrimination on the basis of sexual orientation, gender identity, marital status, pregnancy or receipt of abortion. Yet these schools continue to receive federal funding. Many require explicit professions of faith from faculty. Not only must teachers avoid acting in a way that is immoral in their personal lives, but every aspect of the educational experience is policed to make sure students only receive limited viewpoints and are never challenged on their core beliefs.

Here are just a few examples. Catholic schools love to fire queer teachers, especially when they get married or pregnant. Recently, Franciscan University of Stubenville removed the chair of the English department from his position as punishment for teaching Emmanuel Carrère’s The Kingdom, despite there being no question about the professor’s own commitment to Catholicism. In 2016, St. Mary’s, a small school in Minnesota, fired a popular professor for using phallus props in his production of Medea.

Wheaton College, an elite school sometimes styled the “Harvard of Christian Schools,” began termination procedures against professor Larycia Hawkins (the first tenured African-American professor in the school’s history) because she posted on Facebook that she stands “in religious solidarity with Muslims because they, like me, a Christian, are people of the book. And as Pope Francis stated last week, we worship the same God.” According to Wheaton’s provost, the idea that two of the three Abrahamic religions might venerate the same deity violates the school’s “doctrinal convictions.” Hawkins and Wheaton eventually “parted ways.” No one questioned whether Hawkins was a Christian, but whether her theological understanding of the nature of divinity narrowly clung to Wheaton’s ideological mandate.

At another elite Christian school, Ozark College, students are required to venerate the U.S. flag as well as maintain a Christian life. For Ozark, Christianity excludes “ touching, caressing, and other physical conduct of a sexual nature with a person of the same sex,” all of which is grounds for being fired or expelled.

Imagine what it’s like to be a student or professor at Wheaton today and to know that it’s not just required to be a Christian, but to be exactly the right type of Christian. Will the next professor at Franciscan who wants to challenge students with a complex, possibly offensive, book hold back in order to preserve their professional status? And no one, anywhere, ever, should risk employment because of who they love or what consensual activities they choose to engage in with other adults.

And what about the quality of education? Since at least 2014, a significant cohort of writers and public figures have argued passionately that higher education requires mandatory, regular exposure to “intellectual diversity.” The conversation, as led by people like University of Chicago President Robert Zimmer, the FIRE organization on faculty rights, and elite (mostly white male) writers like Jonathan Chait, Connor Friedersdorf, Bret Stephens, Bari Weiss, Frank Bruni and Jonathan Haidt, have joined more explicitly partisan voices to condemn elite liberal universities.

According to them, the modern practices of overprotective parenting and oversolicitous educators have created a generation of “snowflakes,” students unequipped for the real world, locked in ideological bubbles, and prone to mental health struggles. But these concerns for educational rigor always seem to apply in the same direction. We hear more about sandwich diversity in the Oberlin cafe than we do about the experience of students at religious schools.

I agree that intellectual diversity is important to a true education. But if there are students who are being turned into snowflakes by their education, by mollycoddling parents and by teachers, then surely it’s the millions of students who are attending schools that mandate limited viewpoints, adherence to ideology, and no exposure to true diversity.

As this essay went to press, a video of young white men from Covington Catholic High School harassing a group of indigenous people went viral. The students had traveled from Kentucky to D.C. to attend the March for Life, but paused to surround elder Nathan Phillips as he was playing a drum and chanting. One slid close, grinning, thrilled with his racist provocation, a Hazel Massery of his generation. Maybe if Karen and Mike Pence are worried about saving Christian education in this country, they are going to have to break down the walls of bigotry that cocoon such institutions. Alas, all they seem to care about is keeping queer people out.

Aren’t they the real snowflakes?

David Perry is a historian and journalist. He works at the University of Minnesota.

Lady Gaga weighed in on the nation’s current state of affairs during her “Enigma” show in Las Vegas on Saturday, joining an ever-growing list of celebrities to voice their disapproval of the Trump administration.

The Grammy winner singled out Vice President Mike Pence, slamming him for thinking “it’s acceptable that his wife work at a school that bans LGBTQ”

The vice president has defended Karen Pence’s decision to teach at the Immanual Christian School, which bans LGBTQ employees, students and families. In an interview with Eternal World Television Network, Mike Pence likened the uproar over his wife’s decision to an attack on Christianity.

“You are wrong,” the singer said, before speaking of her own Christian faith:

You said we should not discriminate against Christianity. You are the worst representation of what it means to be a Christian. I am a Christian woman, and what I do know about Christianity is that we bear no prejudice and everybody is welcome. So you can take all that disgrace Mr. Pence and you can look yourself in the mirror and you’ll find it right there.

The “A Star Is Born” actress also issued a message to Donald Trump amid the ongoing partial government shutdown, asking if “the fucking president of the United States could please put our government back in business.”

“There are people who live paycheck to paycheck and need their money,” she said to applause from the audience.