Is America Turning Into a Soviet-Style One-Party State?

We are a polarized nation. Every day, every tweet, every new poll result brings more evidence of this fact.

A recent article in the New Yorker even asked whether we are headed for “a second civil war.”

Though another Fort Sumter isn’t likely in the cards, polarization is leeching the life from our democracy. And nowhere is this clearer than in the steady rise of uncontested elections across the country.

Over 42 percent of the state legislative seats up for election last year had no major-party competition.

Uncontested races have been on the rise since the 1970s. But the problem has begun to accelerate lately, particularly in state house races. The numbers are even worse in local elections, where candidate name recognition is lower, fewer people vote, and challengers have higher barriers to entry.

All of these uncontested races lead to unaccountable elected officials. It becomes impossible to know if candidates won because the voters like them and their policy views or merely because potential opponents didn’t want to run. 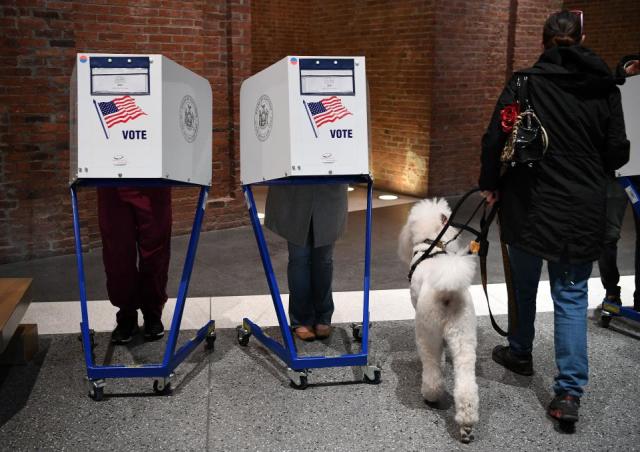 Voters at the Brooklyn Museum polling station in the Brooklyn borough of New York City on November 8, 2016. ANGELA WEISS/AFP/Getty

In a number of states, the situation is even worse: unopposed candidates are simply “declared elected” without appearing on the ballot. These states take away people’s very right to vote in uncontested races.

American voters are not simply accepting their lack of options. They have registered their dissent the only way they can: by not voting.

The evidence shows that 13-17 percent more voters cast blank ballots in uncontested races than in contested ones. Sometimes the numbers are much higher. When Jeff Sessions ran unopposed for U.S. Senate in 2014, for instance, 360,000 Alabama voters (or 31 percent) voted for governor but refused to vote for Sessions.

How did we get to this point? There are several factors.

One is partisan gerrymandering, which packs people into districts where the minority party has little chance of winning. With the most recent round of redistricting, the number of uncontested races jumped. On average, 42 percent of state legislators saw no major-party competition from 2012 to 2016—ten points higher than in 2010.

Another factor is our campaign finance system, which favors big donors. Among incumbents’ many advantages is their control over government functions, which attracts large donors who hope to influence them. Without a competing source of funds, potential challengers will not spend months campaigning—especially in lopsided jurisdictions where they do not think they will win.

It is also true that people are sorting themselves into like-minded communities, which contributes to polarization. But self-sorting cannot explain all—or even most—of the recent increase in uncontested races. After all, there was no mass migration between 2010 and 2012 that can account for the sudden surge in unopposed candidacies after the last redistricting.

Gerrymandering and the campaign finance system are formidable foes. But tackling these problems will not only reduce uncontested races; it will also fix numerous other ills that plague our democracy.

Ending extreme partisan gerrymandering would give people the government they actually voted for, not the one that their legislature picked for them. This could help reverse the trend of uncontested races, but it would also create legislatures that are ideologically closer to the people they serve.

The Supreme Court will hear a watershed case in the next term that could curb the practice of partisan gerrymandering nationwide. Regardless of how the Court rules, however, people can push their state legislators or sponsor initiatives to create nonpartisan, independent redistricting commissions.

We should also consider adopting public financing for all of our campaigns, as most other industrialized nations do. Public financing programs, especially those that provide the full average cost of running a state legislative race, encourage people to contest otherwise uncontested races. They also take on corruption, and can shift power from the wealthy donor class to the average American.

Unless we do something about the toxic combination of uncontested races, partisan gerrymandering, and our campaign finance system, our own election process will push us ever further apart.

Rather than weaponizing our own democracy against ourselves, America should strive together for a less polarized society.

Noah B. Lindell, legal fellow at Campaign Legal Center, has litigated over a dozen election law cases, and has briefed numerous election law cases before the U.S. Supreme Court and the U.S. Courts of Appeals. He is the author of One Person, No Votes: Unopposed Candidate Statutes and the State of Election Law, forthcoming in the Wisconsin Law Review, and Williams-Yulee and the Anomaly of Campaign Finance Law, published in the Yale Law Journal.