Iowans Unite to Stop Hog Farms From Polluting Their Community

Families in the Hawkeye State are joining together to stop the spread of large-scale farms that they say are polluting the environment and destroying their way of life. 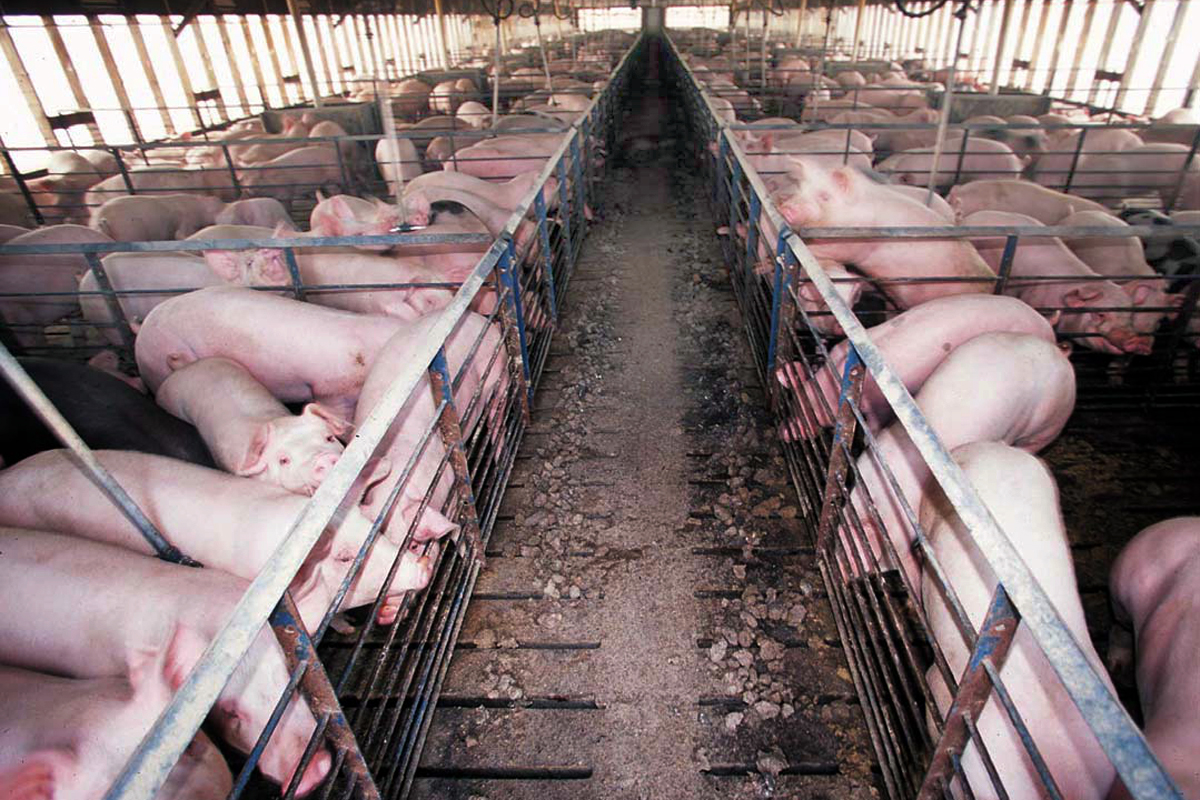 Sue George never intended to be an activist. The soft-spoken, retired elementary school teacher was content on her century farm near Lime Springs, a town in the rolling hills of northeast Iowa with a tad under 500 people.

Then, the hog operations moved in.

George lost the need to be “Midwest nice,” she said. “I’m not willing to let our way of life go by the wayside for these people who are coming in and putting all of this manure and all of this pollution into our area. I’m not.”

So George organized her neighbors and created a legal document to protect her farm, and town, from the large-scale hog operations she said are destroying a way of life and polluting the environment.

The state, already leading the nation in pork production, is experiencing a rapid rise in large-scale hog operations. Between 1982 and 2012, the most recent U.S. Department of Agriculture census, total hog production in Iowa rose from 14.3 million a year to 20.5 million. During the same time period, the number of farmers producing hogs dropped from 45,768 to 6,266.

To continue increasing hog production, the remaining farm owners build specially designed facilities to keep the animals indoors where their food and waste can be controlled. People are divided about whether these concentrated animal feeding operations, also known as CAFOs, either are the future of American farming or symbolize profits trumping concerns for rural livelihoods, the environment, and animal welfare. In Iowa, this is more than a mere disagreement about farming techniques. It is a fight over what the Iowa landscape will look like, a fight between rural residents and industrial agriculture.

George’s group, founded in early 2017 and called Northeast Iowans for Clean Air and Water, includes farmers, local business owners, and Amish families. Through weekly meetings at homes and farms, conversations over potlucks and on front porches, they organized, advocated, and supported legislation to stop the construction. They placed signs along the highway opposing the new operations. They asked the Department of Natural Resources not to approve the facilities. George testified before the state legislature. She even met with one of the new owners, a man she taught when he was in elementary school.

“We did everything right,” George said. “And it still didn’t work.” The confinements went up and the hogs moved in.

When campaigning state and local government failed, George and dozens of other Iowa families turned to the law instead.

More than 40 families joined George in forming a covenant—a binding legal document in which all the members agree to a set of terms. A local lawyer donated his time to draw up the terms, which stipulated that none of the properties in the covenant—more than 5,500 acres total—would ever house a CAFO or allow a CAFO to spread liquid manure on their land.

CAFO is a catchall term for production facilities housing more than 1,000 animal units, defined by the USDA as the equivalent to 1,000 pounds of animal weight, which is 1,000 beef cattle or 2,500 swine. CAFOs keep animals inside for more than 45 days a year and fall under the Environmental Protection Agency’s Clean Water Act. However, each state regulates the operations differently.

Concentrating animals in one location requires more strict manure management than animals raised on pasture. Large farms produce millions of gallons of manure a year, which is more fecal waste than is produced in some American cities, according to the National Association of Local Boards of Health. The manure in most hog facilities falls through slatted floors into holding tanks. Then it’s hauled off and spread as fertilizer for crops.

Manure from CAFOs can contain E. coli, MRSA, antibiotics, and animal growth hormones. When the manure is not spread properly, these contaminants pollute waterways and private wells, as well as contribute to the rise of antibiotic-resistant bacteria. According to Local Boards of Health group, “states with high concentrations of CAFOs experience on average 20 to 30 serious water quality problems per year as a result of manure management problems.” All CAFO manure lagoons leak, according to the EPA, though certain designs can lower leakage to acceptable levels.

Water quality is a chief concern for members of Northeast Iowans for Clean Air and Water and something the covenant cannot necessarily protect. Some local facilities are near rivers, where manure runs off when a tank leaks or heavy rains fall. The area’s natural hills and karst topography—made up of limestone and especially susceptible to sinkholes—increase the likelihood that improperly applied liquid manure will run into waterways. The area is known for its natural trout streams, too. Trout fishing generates $1.6 billion annual revenue for Iowa and surrounding states. The fish need clean water to reproduce.

Several Lime Springs residents will drink only bottled water. A hog confinement sits a half-mile from Russell Stevenson’s farm, where he has lived and worked for decades. As a member of the covenant, Stevenson is concerned not if his private well will be contaminated, but when, he said. “It is not pig farming,” Stevenson said of CAFOs. “It’s a pig factory, and they ought to be regulated like one.”

Members of the covenant and activists throughout the state say CAFOs should be treated like the factories and corporations they resemble, instead of being given pollution tax exemptions and land zoned for agriculture. The operations can claim they are traditional family farms. John Ikerd, agricultural economics professor at the University of Missouri, said CAFOs are free from many of the environmental and public health regulations other operations generating similar amounts of waste must follow. The EPA’s Clean Water Act only regulates confinements of more than 2,500 hogs. Otherwise, the EPA does not regulate the confinements unless they dump waste directly into a waterway.

If the burden of proof was on the CAFO operator to prove the operation was not a threat to public health, no CAFOs could be built, Ikerd said. “Under the existing regulations, the burden of proof is on the public in general to prove that somebody is going to get sick from a particular CAFO, and that’s very difficult to prove.”

Bill Goetsch has farmed the area since he graduated from high school in the early 1980s. His wells were already contaminated when neighbors approached him about the covenant. A CAFO is a short walk up the valley from his home.

Goetsch said he was already concerned about his water, but now smells are coming down the valley. A study from Iowa State University and the University of Iowa determined air emissions from CAFOs “constitute a public health hazard.” About one in four CAFO workers in the U.S. suffers from a respiratory disease, such as bronchitis and asthma-like symptoms. A study of North Carolina residents found people living near CAFOs faced an increase in the same respiratory diseases suffered by CAFO workers. Lime Springs resident Joann Wangen said her adult children make comments about the smells when they visit her and her husband, Rick. Her guests had to stay inside during a recent Thanksgiving because the smells were so bad, she said.

Many advocates point out failures in the design of the state’s master matrix, which guides the siting of proposed operations. The process awards points depending on the building’s distance from homes, schools, and water sources; the overall point score determines whether a project is approved and where it’s sited. Critics of the current matrix point out how equal points are awarded to CAFO owners for doing things with vastly different implications. For example, proposals that include tree planting or that provide enough space for a truck to turn around in are weighted the same as having an emergency containment area for manure spills. A 2018 study found the DNR approved 97 percent of requested building permits.

Confinements of up to 1,249 hogs—considered a small operation—do not need to create a manure management plan or file a construction permit. Confinements of up to 2,499 hogs do not need a construction permit, either. According to DNR data, 3,745 sites in Iowa have fewer than 2,499 hogs. But the total number is likely much higher than that. A 2017 report using satellite imagery identified more than 5,000 hog and cattle lots in Iowa the DNR did not know about. More than 1,000 of those facilities are believed to require state oversight.

Weak state regulations mean CAFOs can move in wherever they please, members of Northeast Iowans for Clean Air and Water said. They point to an operation being approved on an environmentally sensitive site in Allamakee County. Former Iowa DNR director Chuck Gipp said if a CAFO could be built there, then a CAFO could be built anywhere. The hog facility was approved.

Tyler Bettin, public policy director for the Iowa Pork Producers Association, said the matrix system removes the burden from county supervisors to approve the building of each new operation and allows the DNR to better enforce regulations. “The master matrix continues to be very effective,” he said. “It’s a stair-step approach to regulation, so it requires our larger farms to go above and beyond the minimum requirements.”

George is among the advocates in Iowa wanting to revise the matrix to be more rigorous in assigning points. She’d also like it to give more control to counties and local supervisors, who can account for community desires and unique geographic features, like karst terrain or wetlands.

State Sen. David Johnson is among the political voices calling for stricter CAFO regulation. He helped design the state’s matrix in 2002. Johnson introduced 15 state bills related to CAFOs, such as stopping all CAFO construction until the number of impaired waterways in Iowa drops from 750 to 100 and the matrix is redesigned.

None of the bills Johnson introduced made it out of the agriculture committee.

George’s covenant is intended to fill the gap left by these failed state and federal legislative attempts at increasing regulation of CAFOs. By ensuring that confinements will not be introduced onto designated lands, the covenant is protecting a small area of Howard County.

This fall, the group may look to expand the number of people and properties involved in the covenant. The agreement gives George some freedom from worrying about whether another hog operation will move into her backyard. Creating the covenant took a lot of time and hard work, she said, but it strengthened local connections in ways she did not expect. “We have a common bond between us,” she said. “I feel that we’re a tighter-knit community, and we’re all on the same page.”

Individuals and groups across the state have contacted George about the covenant. She has information ready for them—an example of their covenant, a timeline of their process, and important questions to ask the group.

Iowa isn’t the only state with a growing CAFO presence. Trouble with CAFOs and environmental damages got national attention in 2016 in North Carolina when Hurricane Matthew flooded manure lagoons into waterways and the Atlantic Ocean; Hurricane Florence has flooded manure lagoons again. Similar battles between local communities and CAFO operators are playing out in Kansas,Wisconsin, Michigan, Arkansas, Illinois, and Minnesota. According to the USDA, the United States has more than 45,000 CAFOs.

For many consumers, the farms are out of sight and out of mind. People need to know the price that small communities are being forced to pay to produce these goods, Stevenson said. “It boggles my mind that there are so many people who live in towns and cities and they have no idea what’s going on [on] these farms.”