In the Era of Trump, Illusions Are Not Reserved for Halloween 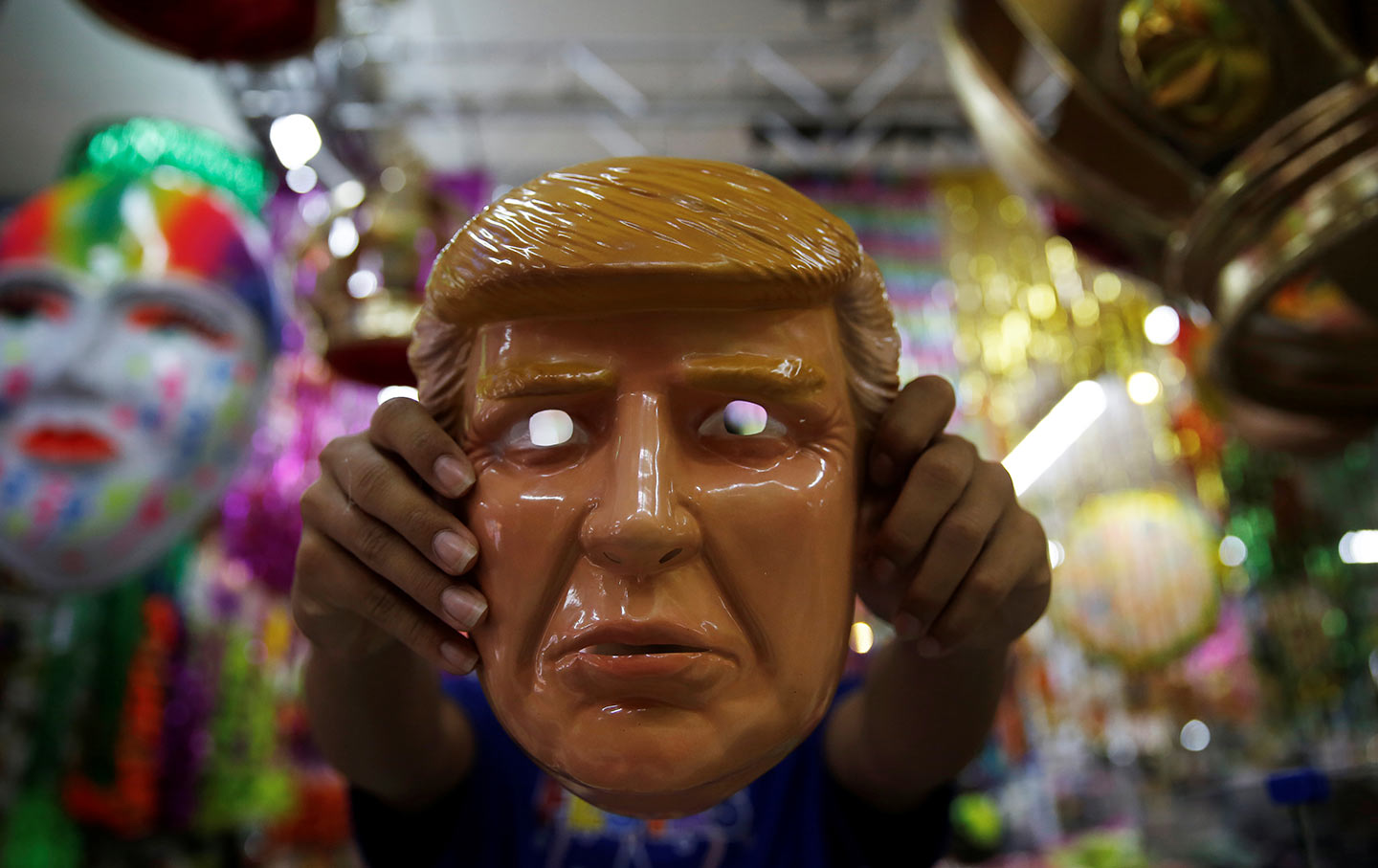 A vendor holds a rubber mask of Donald Trump at a shop in Sao Paulo, Brazil, January 2017. (Reuters / Nacho Doce)

It is a tribute to the strange unreality of our time that among the children’s Halloween outfits being sold online, there was this: an Anne Frank costume. “100% polyester,” read the product description. “Easy to put on and take off. Visits to the toilet made easy thanks to Velcro fastening.”

“All the kids love it,” another blurb promised. “This outfit can be worn for many different occasions such as World War times, Evacuee times and also as a street urchin.” Happily, the pushback was immediate, strong, and condemnatory enough that the costume’s name was changed. It is now being sold as a “World War II Evacuee…Fancy Dress Costume [for] Girls.”

The thought of children dressing “up” as Anne Frank to trick-or-treat as part of the Christian celebration of All Hallows Eve is surely bizarre enough. Yet I suppose it isn’t any more shocking than the proliferation of dead Trayvon-Martin costumes that proliferated a few years back, or the recurring phenomenon of fraternity blackface parties, or the odd use of tiki torches to symbolize the white-hot flames of neo-Nazi power. To be fair, some of these masquerades are concocted for supposedly educational purposes, such as a Georgia middle school’s Civil War Dress-Up Day (guess who gets to be a plantation owner, who a slave), or the recent documentary on Britain’s Channel 4, My Week as a Muslim, in which a “frightened” white woman dons a hijab and brown makeup in order to “experience” racism and discover “why they live like that.”

There is a fiercely reiterated colonialism in these little morality plays, something habitual about this leaping out of our lives to become someone else. I wonder, too, if there isn’t a peculiar kind of trauma hiding in plain sight in these reenactments, this desire to “pass” as something we are not, to blend in even as we perform otherness, whether exoticizing or demonizing. It is curious the degree to which we so easily assume we can walk in the moccasins of another by literally buying the shirt off the back of that other (as well as those absolutely darling hand-stitched moccasins). I don’t wish to rain on anyone’s parade; I believe that the rituals of role reversal can serve important psychic and cultural functions. But when we have no consciousness of the narratives we are performing, then I worry that it becomes indistinguishable from living a lie.

I am not alone in worrying about the prevalence of public lying right now. Dissembling is so widespread that we seem ensnared by the proleptic expectation that nothing is ever as it seems. Consider the irresistibly surreal assertions of one Joe Vargas, a manufacturer of hemp syrup. In a tweet that went viral, he maintained that Melania Trump—as seen in a photo taken of the first couple touring a Secret Service training center in Maryland—was not really Melania Trump. The Twitterverse went wild, applying biometrics to measure her height, her nose, the jib of her jaw. Some even pointed to what appeared to be split ends on the alleged body double’s alleged wig: The real Melania would never have split ends! (If only that laser scope of surveillance were applied to the rest of our political world.)

Perhaps it was the very assertion that there is such a thing as hemp syrup that beguiled us down the fairy-tale path toward the lure of impersonation. I found myself yearning for the big reveal: Syrup Salesman Uncovers Body-Snatching Aliens Inhabiting the White House. It would explain so much.

As we approach the one-year mark of the Trump presidency, I cannot shake the sense that we have well and truly entered Lewis Carroll’s alternative universe on the other side of the looking glass. With every 3 am tweet that may or may not be entered into the National Archives, it feels as though we are conversing about a United States that exists only as a figment of the Red King’s dreams. As Tweedledum explained it to Alice with such eloquence: “If that there King was to wake, you’d go out—bang!—like a candle!”

Even as I write, the news is heavy with mourning and confusion, vengeance and ventriloquism; nothing is what it purports to be. Facebook and Twitter are said to have provided a platform for the Russian government to create an unholy host of “fake Americans” whose viral messaging, it was hoped, would influence our elections. According to The New York Times, the “phony promoters” of one of those sites, DCLeaks, “were in the vanguard of a cyberarmy of counterfeit Facebook and Twitter accounts, a legion of Russian-controlled impostors whose operations are still being unraveled.”

Phoniness defines us now; all is smoke and mirrors and very bad magic. For proof, we have only to consider the stream of nonsense, misrepresentation, and outright lies that issues daily from the president of the United States: Prior presidents never called the relatives of dead service members. The Chinese created the concept of global warming. Barack Obama’s birth certificate is a forgery. Inoculation causes autism. No one has done more for people with disabilities than Donald Trump. No one has more respect for women than Donald Trump.

And the moon is made of hemp syrup.

I believe that we are experiencing a concerted and intentional assault upon our collective memory. If “Never again” was the phrase that until recently conveyed our refusal to forget the horrors of the Holocaust, we have now entered an age guided by a new imperative: “Never remember.” Beneath the weight of such corruption, someone passing as Melania Trump (bewigged with split ends or not) frankly seems less peculiar than her husband’s dressing up as president. And as for Anne Frank? Her memory has been diminished to a “blue dress with peter pan collar. Brown saddle bag and green beret complete the look. Ideal for indoor events.”

Tweedledee put it best: “Contrariwise, if it was so, it might be; and if it were so, it would be; but as it isn’t, it ain’t. That’s logic.”