If the Republican Party Is Going to Regain Sanity, It Needs to Lose People Like Tom Cotton 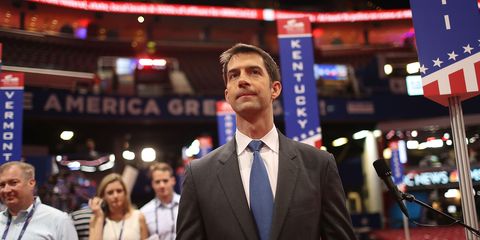 When El Caudillo Del Mar-a-Lago finally is gone, and all those Never Trump Republicans are beavering away at pretending he wasn’t the perfect product of 40 years of Republican politics, undoubtedly aided and abetted by their new pals in the elite political media, we are all going to have to deal with Senator Tom Cotton of Arkansas.

You may recall that this jumped-up wingnut-welfare hothouse orchid first made news by trying to submarine President Barack Obama’s successful attempt to strike a deal with Iran. Since then, this bobble-throated slapdick has made a habit of killing off any policy initiative, no matter how bipartisan, that doesn’t fit into the political persona he is crafting for his inevitable White House run. Believe me, it’s coming. For pure ambition, this guy makes Frank Underwood look like a cloistered Trappist. He is going to run as the hardbar’s hardbar, and he’s not going to let anything get in his way, including, as it happens, the truth. Also, anything resembling a reasonable compromise on any issue.

Eventually, he got his way on the Iran deal, because the country elected a president* who doesn’t know anything about anything, and he’s spent his time since then pitching a ramped up sanctions regime and threatening any European nation that dares flout the obvious genius of this policy. He also was central to the failure of the Congress to strike any deal regarding the Dreamers last winter. From CNN:

Sen. Tom Cotton, an Arkansas Republican, said on the Senate floor that the plan would be called the “olly olly oxen free amendment.”

The benefits of a Harvard education right there. Back when he was still an explicable facsimile of a sentient human being, Lindsey Graham called Cotton “the Steve King of the Senate.” This was not a compliment.

Now, with the fanciful bipartisan dream of criminal-justice reform being floated again by desperate Republicans facing a midterm cataclysm, Cotton has stepped in to argue for a renewed “war” on drugs and for a more draconian criminal-justice system. From Politico:

“Cotton is lambasting the proposal as a “jailbreak” that would “let serious felons back on the streets,” taking on a daunting coalition fighting for the package that includes the Koch political operation, White House adviser Jared Kushner and a number of powerful GOP senators. But Cotton believes that, in the end, President Trump and Senate Majority Leader Mitch McConnell (R-Ky.) will side with him. “The president went to Singapore and agreed with the Singaporeans that we should give the death penalty to drug dealers. I can’t imagine the president wants to reduce mandatory minimum sentences for drug dealers,” the Arkansas Republican said in an interview. “I believe Sen. McConnell shares my view that we should not let serious felons out of jail and we should not shorten the sentences for drug dealers.” Even opponents of sentencing reform will privately admit it would likely pass if McConnell brings it up. But Cotton’s loud opposition may determine whether or not McConnell even allows a vote given his reluctance to summon up legislation that divides the conference — right before the election, no less.”

Everybody with even a passing expertise with the American criminal justice system—from cops to prosecutors to defense lawyers to inmates—realizes that this system is dangerously out of whack. It is racially biased. It is shot through with double standards based on class. The prisons are overcrowded, and privatizing them has proven to be a wretched failure. Every state has at least one maximum-security facility that is ready to blow. And you can’t reform this system without reforming the process of sentencing the people in it.

And this is where Tom Cotton has decided to plant his flag for 2024 or whenever. He spends a lot of time tweeting out the details of atrocity crimes across America—a cheap trick for conservative con-men since before he was born. In every sense, he is an extremist, and not just on this issue, either.

Despite the long odds, the battle is raging behind the scenes. Internal discussions of the subject at Senate lunches have been heated, according to Republican sources, a preview of what might happen on the Senate floor if the chamber takes it up. It’s the same dynamic that kept McConnell from bringing up a larger criminal justice reform package in 2016 as Cotton railed against it and declared the United States has an “under-incarceration problem.” Trump’s “for prison reform, I’m for prison reform. What I don’t support is sentencing reductions under the guise of prison reforms, and that’s unfortunately what many senators are moving towards,” Cotton said in the interview.

This is the basic fault line under all the earnest Never Trumpers that you see making the rounds these days. If the Republican Party is ever going to regain its sanity again, if it ever is going to cast off the ravages of the prion disease it acquired when Ronald Reagan first fed it the monkeybrains in 1980, then it is going to reform root and branch. It’s easy to say that the party has learned a lesson from nominating Donald Trump. It has to learn not to produce Tom Cottons, either.